Distant Pleasures charts the shift from digital to analog work in Christopher W. McDonald’s visual art practice over the past decade and a half. While the medium has changed over the years, at the core all pieces are meditations on how technology shapes and dislocates human behavior. Distant Pleasures is the first survey show of the artist’s work and the first time exhibiting in Maine.

In Moving Line (2007), horizontal motion becomes vertical motion as a television misunderstands what it is seeing. A line moves back and forth across the screen faster and faster and is digested into progressively smaller and smaller chunks. These chunks form increasingly intricate patterns that appear to scroll up and down and rotate in place. After two and a half hours, the line is moving as fast as it can and slows down until it becomes a recognizable vertical line again and the process repeats.

The white-clad figure in Sugaring Off (2011) navigates a sugar bush, drinking sap from buckets along the way. This figure is alone and the mood is less celebratory than the depictions in Eastman Johnson’s series of paintings of revelers in the woods of Fryeburg, Maine: music and dancing, children playing and sap boiling. In the 1860s when Johnson painted the series, maple syrup had become an abolitionist symbol of pride for New Englanders.

and, body (2012) is a collaboration between artist and machine captured in a long exposure photograph. For an hour and a half, the artist posed in a small elevator while the machine projects a slowly moving point of light caressing the contours of body and space. The work is something like an optical relief etching of the scene, with an appearance somewhere between digital rendering and a complicated installation of neon lights. Shot on medium format negative and printed chemically, it interrogates the boundaries between digital and analog, photography and painting, performance and archive.

The Rooms (2014–present) is an ongoing series of pastels, charcoal drawings and egg tempera paintings of sex webcams. Each piece is a window into an empty room. The tone is ambivalent–at times comical, at times darker, sometimes more matter of fact. Larger works on paper are suspended throughout the space. A few smaller ones painted in egg tempera on granite sit in the window.

Around that time, she got married and became an oracle. Runes were drawn on the farmhouse, stars were watched, cards were read. He had already been director of sound for Ragnar Kjartansson for seven years or so and later perfected her ramen noodle recipe–homeground durum flour, very hot water, alkaline salts, and something else. There were two tricks: wrapping the cut noodles loosely in linen cloth to rest until firm and the something else.

It must have been at least three decades ago that he learned his first programming language. Superficially, yes, but still–he was just a kid. This February, he tapped the maple trees again. He also built machines in the city a long, long time ago and on a lunch break once suddenly realized he was listening to “Copacabana” on top of a glacier. 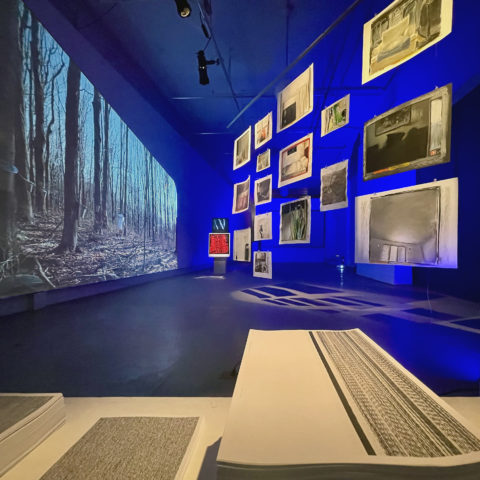