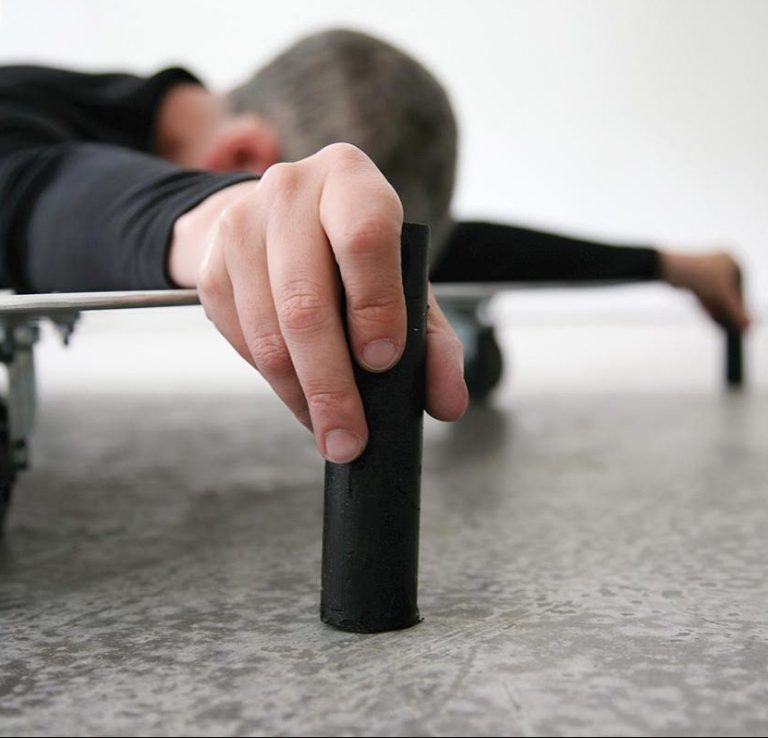 Deborah Wing-Sproul is a multidisciplinary artist working primarily in photography, video and performance. Her performances (or “performative acts”) permeate the genres of sculpture/installation, drawing, photography and printmaking. She is a 2018 Kindling Fund recipient for her project Durational Devices, and is a member of SPACE Studios. Julia Whyel sat down with her in the fall of 2017 to discuss her practice.

The following is a transciption of an interview recorded on November 16, 2017 in SPACE Studios, Portland, Maine.

I’m Deborah Wing-Sproul and my practice is primarily video, photography, and performance. And much of that is informed by both my background as a dancer, choreographer, in terms of still very much needing to use my body as a source. And informed by my questions and concerns for individuals and cultures and how we do or do not communicate or see one another, or question our own perspectives. I work very slowly over long periods of time. I guess I’m not what you might consider to be a prolific artist. My feedback loop isn’t whether or not I can sell something, I’m really interested in just trying to understand what I’m doing here, how I can interface with culture, how I can interface with my place on this planet, and create conversations around the work to really understand too how that work is affecting other people. I don’t, or at least I haven’t yet, I don’t expect that I will, I don’t use other subjects in my work really out of respect for other people. What I expect of myself is one thing, but for me to expect someone else to put themselves in the situations that I sometimes do, it just, not really seem very fair. Also I learned, having my own feedback loop, my discomfort for instance in any given situation, is part of the information that I’m processing in terms of creating the work. The making of the work and what the work looks like in the end is all part of the process.

The real gem is rich conversations around the work. This sort of gets back to some of my work, which is, I think that what individuals want is to be seen, to be understood. And for someone to take the time to have a conversation, make eye contact, slow down, take time, not have an agenda, but to really listen to what someone has to say. And when someone does that with the work, one great conversation can carry me for months or years, and then I go back in to my little hovel. I mean that’s perhaps an exaggeration, what I really like, what’s really meaningful is to have the work out there so the public can see it, that’s both my feedback loop, those conversations, but also to help elucidate for the public what’s going on there. And to put that work in some sort of art historical context, or political context, or geographical context, because I’m responding to the world that we’re living in right now, I’m responding to tragedy or isolation or misunderstanding or assumptions or judgement or compartmentalization of cultures, all of these things that are going on are deeply troubling and upsetting. I’m not a policy maker, I think I’m doing what I’m supposed to be doing, that and some other things that are not art related. But I’m just trying to make sense of where I am, and trying to create something that puts those observations in a context that is relevant to a lot of people. Sometimes if we just see something that we’ve felt before, it validates our own perceptions. I’m operating on that kind of level, I’m trying to operate on both what’s visible, but also how what we see affects us as individuals.

You mentioned alterations to this studio space that you had made, would you talk about how you’ve changed the space and adapted it to your needs and how the space fits into your practice?

So this studio, which is fairly small and receives really soft morning light, which I tend to be here in the mornings and not here in the evenings, I use it primarily for photography. The walls show their history, and the floors had many layers of paint and I wanted really a fairly neutral canvas but I didn’t want to obliterate the history. I didn’t want a clinically sterile environment, I wanted to hold on to the character of the space, but have it quiet, visually quiet. So the space is part of the photographs, I mean I basically use this white wall with this molding and these floors that have taken on scratches and dents, but I stripped the floor and then on my hands and knees rubbed tung oil into it, I do that periodically. It’s a little over the top perhaps but I think it’s also, the practice of taking care of a space is part of my practice, it’s part of what I need to quiet the chatter in my brain or whatever. The work is very lean, visually, and so everything that’s in that photograph becomes part of the subject, so I wanted to give care to the room as part of the subject.

What are the challenges and opportunities of being an artist in Portland, Maine?

I think that depends. I’ve taught some at MECA, and I think for young artists coming out of school I think there’s a lot of opportunity, and I think MECA does a good job of helping to create those opportunities for students. I think as one gets older, perhaps there are different kinds of challenges. I am always looking for ways to both participate locally but not be confined by the local, or limited by the local. There used to be more of a divide there, be a local artist be an international artist. I feel like more and more with organizations like SPACE Gallery they’re helping to make that, there’s more and more people working across that spectrum, where either working locally grows to something beyond the local. I don’t push against Portland, but I also am not defined by Portland.

Julia Whyel is a Storyteller and Media Producer in New England. Her work focuses on themes of community, addiction, and vintage fashion. She loves photo albums, boat rides, and surprise parties, but not necessarily in that order. View her work here.