“the James Joyce of the back country, a Proust of rural society, an original in every meaning of the word.”
– New York Times on Carolyn Chute

Join the MWPA and SPACE to celebrate the launch of Maine literary paragon Carolyn Chute‘s latest novel, The Recipe for Revolution.

Kirkus describes the book as “Essential reading… The third volume in Chute’s blistering series about the Settlement, a radical collective of the disorderly and disaffected in rural Maine.” Booklist says, “Characters and relationships drive this novel with a fierce political vision that feels uniquely tailored for our times.”

After a brief reading, Chute will be joined by Bill Roorbach for a conversation about her work.

Carolyn Chute is the nationally best-selling author of seven books, including Treat Us Like Dogs and We Will Become Wolves; The School on Heart’s Content Road, a New York Times Notable Book of the Year;The Beans of Egypt, Maine; Letourneau’s Used Auto Parts; Snow Man; and Merry Men. She has been awarded a Guggenheim Fellowship, the PEN New England Award for Literary Excellence in Fiction, and a Thorton Wilder Fellowship.

Bill Roorbach’s next book is Lucky Turtle, forthcoming 2021 from Algonquin. Also from Algonquin are The Girl of the Lake: Stories (2017); The Remedy for Love, (2015) a shortlist finalist for the Kirkus Fiction Prize, and the bestselling Life Among Giants (2012).  Big Bend won the Flannery O’Connor and O. Henry prizes in 2000.  His memoir in nature, Temple Stream, won the Maine Literary Award in nonfiction 2005.  Into Woods and Summers with Juliet are also available in new editions. Bill was a 2018 Civitella Ranieri Foundation fellow, a National Endowment for the Arts Fellow, a MacDowell Fellow, and a Furthermore Fellow.  His craft book, Writing Life Stories, is used in writing programs around the world. Short work, both fiction and nonfiction, has appeared in Harper’s, The New York Times Magazine, The Atlantic, Ploughshares, Granta, Ecotone, New York Magazine, Playboy, DécorMaine, and dozens more.  He lives in Scarborough and Farmington. 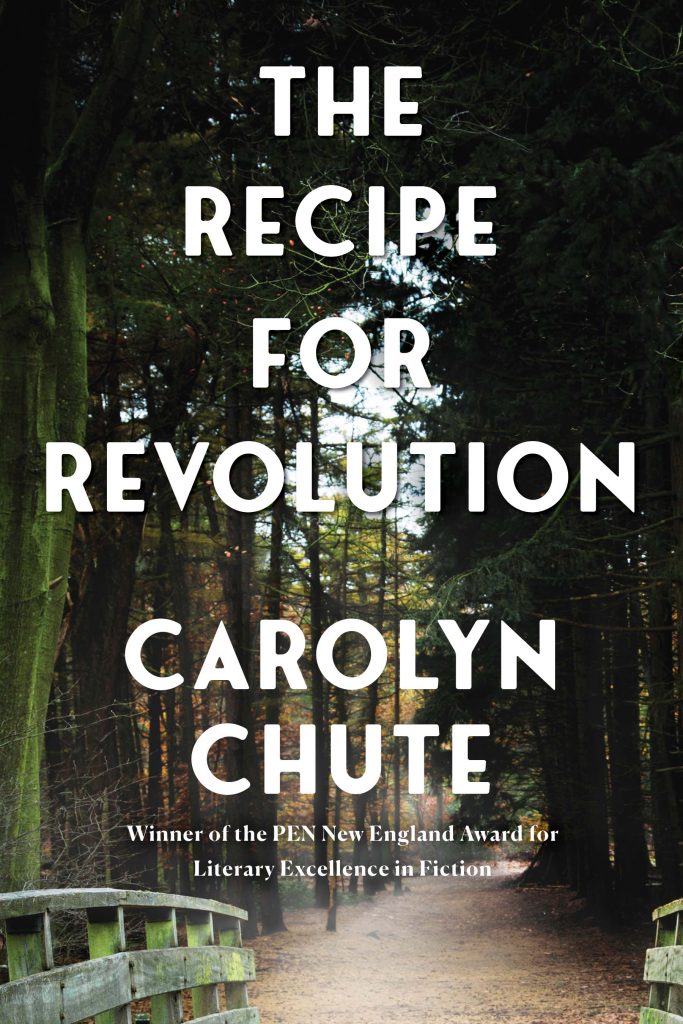 More about The Recipe for Revolution (from Grove Atlantic):

In The Recipe for Revolution Carolyn Chute portrays politics, class, love, and friendship with acuity and complexity, giving us a pulsating, relevant book for today’s America.

It’s September 1999 and the world is on the cusp of a new millennium. In rural Maine, Gordon St. Onge, known as “The Prophet”, presides over his controversial Settlement, a place rumored to be a cult, where his many wives and children live off the grid and off the land. Out in greater America, Bruce Hummer, the aging CEO of multinational corporation Duotron Lindsey, lays off workers by the thousands.  Meanwhile, the newest member of the Settlement, fifteen year old Brianna Vandermast, is fired up and ready for change. Disillusioned with the covert local militia, she and other Settlement teens form the True Maine Militia. Putting her visionary ideas into practice, Bree pens “The Recipe”, an incendiary revolutionary document that winds up in the hands of wealthy elites, including Bruce Hummer.

When a chance drinking session during an airport layover brings Bruce and Gordon together, Hummer—in a confounding moment— gives Gordon a mysterious brass key, one turn of which has the potential to make heads roll and spark the unrest that is stirring in Egypt, Maine. As word of “The Recipe” spreads, myriad factions of anti-corporate revolt from across the country arrive at The Settlement wanting to make Gordon their poster boy. Gordon soon finds himself at the center of an uprising, the effects of which ripple beyond Settlement life.