give me a tension!

give me a tension! is a long-distance collaboration between mutual admirers from forever. They met in the early 90s; Naomi, a four-year-old student and Kelly, a teacher in her mid-twenties, romped around a preschool classroom together inciting, encouraging and realizing each others’ big ideas. As Naomi’s first art teacher, Kelly taught Naomi that art could be a part of life and of her personality. Their historic approach to play has affected the way they collaborate today and build worlds in their shared imaginations. They’ve both spent large portions of their lives living near harbors, boats, and the mythology which surrounds them. Kelly’s include Mystic Seaport, Baltimore Harbor, Jersey City’s piers, and the same piers Naomi grew up in Portland.

give me a tension! is based in maritime superstition which believed a figurehead (the wooden statue on the bow of a ship) should be carved into a conventionally attractive (and often topless) feminine form. The goal was to ensure safe passage by shaming/seducing/calming stormy, rough seas into submission with the beauty and sexiness of the figurehead. McConnell and Moser wanted to see what would happen if a figurehead existing in this paradigm were to question its purpose and refuse to seduce and subdue the ocean in the expected and desired way. In Glitch Feminism, Legacy Russell writes, “When the body is determined as a male or female individual, the body performs gender as its score, guided by a set of rules and requirements that validate and verify the humanity of that individual…nonperformance is a glitch. This glitch is a form of refusal.”

While working, Moser and McConnell saw contemporary culture embracing sea shanties and the idea of being lost at sea during the pandemic becoming zeitgeist. As artists, they found themselves both self-aware and excruciatingly insecure. They wanted to both answer their own questions and show how impossible it is to do so, which they personified in the figurehead’s gut feelings. This figurehead, with its required performance and (almost but not quite) rebellion, is an allegory for one version of a glitch or refusal to play the score of gender in the expected way. In this overly simplified and exaggerated paradigm, the figurehead going off script has the power to bring down the whole ship and create new possible purposes, desires, questions and understandings for all involved. However, in ultimately ignoring the gut feeling, attention is brought to the ways in which these prescribed performances can feel inescapable, safe or gratifying. Roisin Lanigan’s description of the TikTok bimbo in a recent article for I-D seemed fitting for this piece: “a person using the radical power that comes with playing the performance of hyperfemininity as a form of anti-capitalist critique…while at the same time recognizing…that you can’t fully escape the bounds of capitalism as both a source of pleasure and oppression.”

Noting that their own demons (present fears, obsessions and urges) had gotten louder during the pandemic, they were inspired to get in touch with them. On separate coasts, Moser and McConnell each did a “Feeding Our Demons” meditation. This act led them to keep their demon as allies, finding that ultimately there is no use in, or possibility of rejecting or disowning these parts of themselves. Rather than fight the evil structures that exist within them, they accepted the energy and integrated their demons into the avatars and conceptual aesthetic of this video.

To further their experiment with video and two dimensional media, the artists harness the suspension of disbelief usually associated with theater by creating transportative sets and costumes out of paper and paint which magically and digitally become a real and urgent world. Here, in this paper/digital realm, the artists’ thoughts and queries become avatars whose desires, beliefs and expectations play out over and over in an inescapable loop. Viewers are invited to question their own prescribed or intuitive performances of gender, hotness and sexiness and to ally with their own demons. Know that even in stillness we are all still spinning.

Kelly McConnell is a dynamic artist-educator whose studio practice is complemented by collaborative projects with learners of all ages and walks of life. Being socially engaged, anti-racist, and a feminist steeped in visual culture is balanced in Kelly’s individual painted works that embrace the body, private self, and metaphysical worlds.

Kelly holds a BA from Gettysburg College, an MFA from Maryland Institute College of Art, and possesses a Certificate in Advanced Education Leadership from Harvard Graduate School of Education. Kelly co-directed the longest running children’s program at SPACE called Lunchbox with Kirsten Cappy; forged a lab school agreement between teaching pre-K-12 schools, museums, galleries, and higher education; and founded and curated the Art in Exodus exhibition and professional development series that showcased immigrant, refugee and, in its third iteration, Black and Brown artists living and working in Maine.

After a long career as an educational leader, Kelly gets to be an artist, curator, supporter and facilitator for future possibilities forged with care. Recent projects include an installation in front the windows of the Portland Public Library, co-curating SPLAY with Ashley Page at Able Baker Contemporary, and conjuring video aesthetic and new skills with Naomi Moser in give me a tension! at SPACE.

Naomi Moser is a video and performance artist based in Los Angeles. She grew up in Portland Maine, received her BA in media studies from Scripps College in Los Angeles in 2013 and her MFA in Photography from Cranbrook Academy of Art in Detroit in 2018. She has participated in residencies and grants in Cordoba, Beirut, New York City, New Smyrna Beach, Toronto, Banff and Bucharest. She makes short, non-linear, looping narrative videos and performs scripted character monologues live. Last year she completed a Fulbright grant in Bucharest, Romania researching Yiddish theater, Jewish performance technique and the Jewish Romanian Dadaists. Forgetfulness, misunderstanding and mimicry–as performed by her ditzy avatars–aim to disrupt and call into question accepted, everyday performativity and the power dynamics therein. Setting her scenes to themes of escapism in the form of travel, nightlife and dress-up, she disarms the viewer with an approachable, campy aesthetic as she points out and questions the scripted ways in which many people talk about sex, morality, politics, gender and religion. 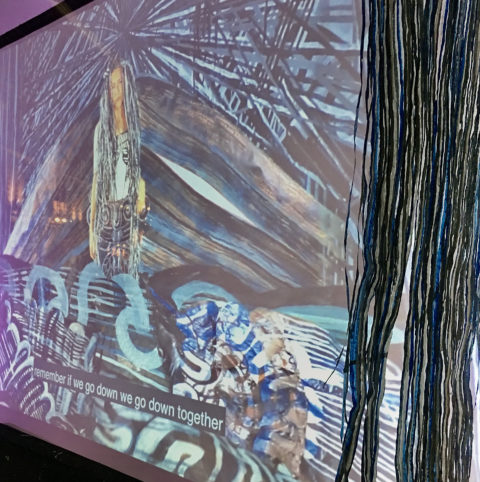