Letters to the Sun

Many of the people I photograph—some friends, some found family, and most of us bonded on shared gender identities—are profoundly radiant. Their radiance lies in the intensity of their love. It’s like the warmth of the sun on bare skin, as the tones of a conversation rise among the scents of smoke and midsummer blooms in the air. But now their splendor is cloistered: dimmed by a sea of screens and spotty connections in times of survival.

In the meantime I photograph objects, biding my time, studying them as they glow and wilt and rot under sunlight. I also borrow from the sun when exposing cyanotypes, imbuing them with a fragment of the energy embodied by solar deities across time and space. Placing fruits atop the exposed cyanotypes and letting them sink into decay, I offer a bit of the sun’s energy back to itself.

The gentle shine of a cut pomegranate brings to mind the red dye in my friend’s hair as they embrace their spouse from behind. The shimmer of green velvet echoes the sun’s rays bounding across the leaves of a garden filled with joyous laughter, the site of an idle daydream in June.

Recalling these moments, precious in their brevity, rekindles the hope that they may yet occur unimpeded by disease, by distance, or by the threat of anti-trans violence. Sustained by the visual treat of fruits and flowers in the sunlight, I dare to grasp the notion that we’ll soon thrive, that we will embrace and bask in each other’s warmth as languid as ever. Glimpses of the sun will have to hold us over until then.

Aurelia Wrenn is an artist who utilizes photography to create a visual language revolving around themes of ritual, identity, and transience. Having studied photography at Delaware College of Art and Design and earned their BFA at Maine College of Art, they specialize in digital and alternative processes. Based in both Southern Maine and Southern Maryland, they are currently generating compositions that explore the interconnections between inanimate materials and animated bodies. They are also actively involved with Maine Transgender Network and its community. 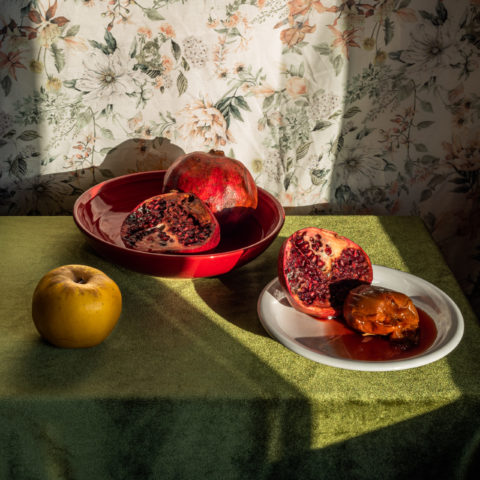