Trail Off is an experimental living-room installation and performance series that focuses on mysticism and nature in a cozy and intimate environment that is both playful and contemplative. Golden Orbs adorn the walls, repurposed wood provide a structure, branches and chandeliers hang from above and a curious surrealist symbolism suggest synergy.  It all trails off in the end…

Curated by Greg Jamie (The Oak and the Ax), and conceptualized and designed by Kelly Rioux (New Fruit) and Gil Corral (Hog Farm Studios).

Listen to our interview with Trail Off coordinator Greg Jamie here.

FRIDAY JANUARY 22, 2016 8:30 PM
Join us in the SPACE gallery for the opening night of Trail Off. Lonesome Leash is the nom-de-plume of troubadour Walt McClements, formerly of Dark Dark Dark, Hurray for the Riff Raff and Why Are We Building Such a Big Ship. The one-man-band project is an accordion-driven, punk cabaret with a spirit steeped in romance and nostalgia. Blood Warrior is the drone-folk duo of O’Death’s Greg Jamie and Joey Weiss. They released a lush and powerful album full of honest heartbreak and elusive dreams on Immune Recordings last May. The Orchards is the chamber-folk songwriting project of Pennsylvania-native Eric Schwan, now based in Portland. His 5th album, recorded with South China’s Jeremy and Jerusha Robinson, among others, is due out in January on Apohadion Recordings.

SUNDAY FEBRUARY 14, 2016 7:00 PM
Love Stories. Valentine’s Day, the holiday that we wish we could quietly destroy but has grown too large for its sudden disappearance to go unnoticed. We should have done it when it was young and we could’ve caught it if it tried to run.  Whether you’re more of a”every love story is a ghost story.” kind of person while your date repeats”all stories are love stories” at least once a week (like it’s his original observation, what a dufus) you’ll both win (or both lose depending on how your date goes) by ringing in V-Day by enjoying a hot beverage and listening to 6 writers, each reading their (broadly defined) interpretations of a “love story.” Part of the SPACE Trail Off Project

FRIDAY FEBRUARY 19, 2016 8:30 PM
SPACE is proud to present a rare Maine appearance by psych-folk visionary Six Organs of Admittance, as part of our annex installation, Trail Off. Started as a solo outlet of Comets on Fire‘s Ben Chasny in 1998, Six Organs has released 16 full-length albums, ranging in styles from lilting, transcendent ragas to wildly impassioned free improv and noise. He’s known world-wide for his long-running relationship with the enigmatic Drag City label and his altogether unique, enduring, and uncompromising musical career. Six Organs also appeared on Devandra Banhart‘s essential The Golden Apples of the Sun compilation alongside other new folk paragons such as Joanna Newsom, Vashti Bunyan, Antony, CocoRosie, Vetiver, and Josephine Foster.

In 2015, Six Organs released two records, Hexadic I and II, which feature an entirely original music-composition system that utilizes playing cards to break guitarists out of habitual approaches and into unfamiliar tonal and even lyrical worlds. Chasny has published an accompanying book, which delves deeply into the system’s intention to provoke the unconscious and spring past the strictures and limits of the conscious mind. He will be presenting his Hexadic system in a free public workshop at SPACE on February 20th.

An unprecedented––and wholly unpredictable––action-adventure, ROAR! follows wildlife preservationist Hank (The Exorcist producer Noel Marshall in his sole and career-derailing turn as an actor and director), who lives harmoniously alongside a menagerie of over 100 untamed animals, including cheetahs, elephants, lions and tigers on a preservation in the African plains. When his wife and children arrive (real-life wife Tippi Hedren, The Birds, and step-daughter Melanie Griffith, Working Girl, and his sons John and Jerry Marshall) for a visit, a long-brewing battle for dominance between the lions erupts and threatens their very lives.

FRIDAY MARCH 4, 2016 5:00 PM TO 10:00 PM
Brought to you by a collection of local artists who’ve taken time to explore indulgence, Rare Birds of Pleasure is an immersive five-hour experience that will pluck at the heartstrings of your senses. Come witness and take part in a forest bustling with human whims and habitual practices, find tender moments, and remember that we’re all sensitive critters in this rapidly changing world. Viva (Viva & The Reinforcements), Jackie Jones, Anomali (Psychic Pictionary), Nicole Chioma Mokeme (Freedom of The Art of Divine Living), Amandaconda, and James Paul Cooper (Hi Tiger) will be taking up residence in the Trail Off forest for the evening, hiding in the trees and doing as they please.

THURSDAY MARCH 10, 2016 8:30 PM
Called a “cultural gadfly” by the New York Times and “ferally original” by the New Yorker, Tim Fite spends the bulk of his time cranking out genre-bending pieces of art and music.  In addition to recent gallery exhibitions at Gallery Tom Blaess and The Beam Center of Brooklyn, Fite has toured internationally with wildly diverse artists such as Bonaparte, Phiharmonie Zuidnederland, Man Man, My Brightest Diamond, Les Claypool, Ben Kweller, Azure Ray, and others.  He has released three full-length albums on Anti Records, as well as plethora of genre-bending self-releases.  His multimedia live performances are joyfully alive and infectious, while staying culturally relevant and hyper-aware.

BJ Snowden is an outsider artist who has been heralded far and wide by the likes of Fred Schneider of the B-52’s and Jello Biafra of the Dead Kennedys, and appeared on Jimmy Kimmel Live, MTV’s Oddville, Late Night with Jimmy Fallon, and The Daily Show. A school-teacher by trade, she’s guaranteed to put a smile on your face with her all-original Casio-laden singalongs and unapologetic adoration of all things Canadian.

We can think of no better way to end the eight-week run of Trail Off than with this showcase of spirited, unique, and uncompromising performers.​​​​

Horse Jumper of Love with Babehoven and Sadurn
Thursday, August 11 2022 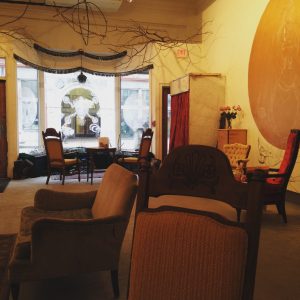