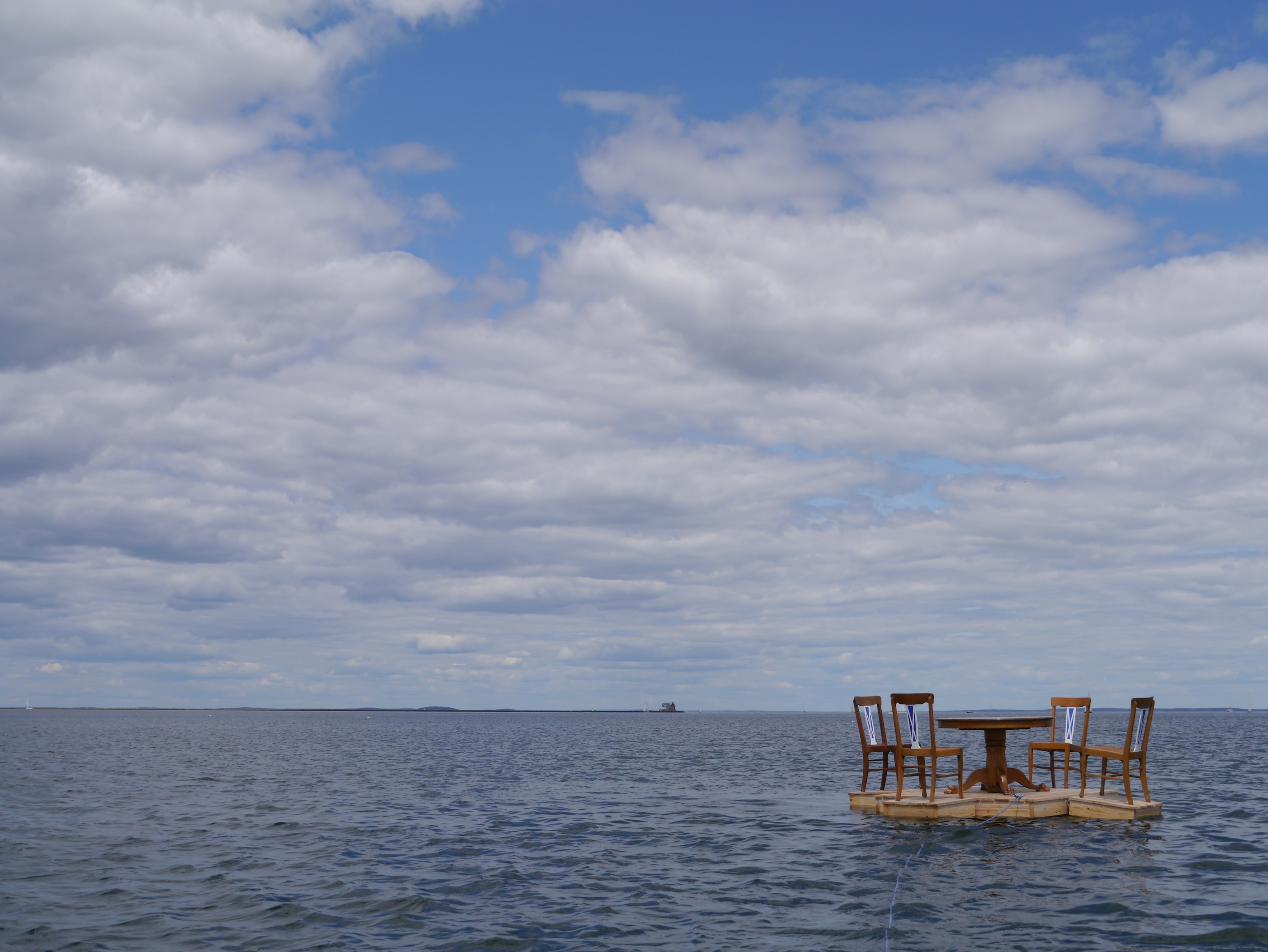 Artist Adam John Manley has been toiling away in our annex this week installing his show, Staying Put, which opens tomorrow. The exhibition revolves around a floating sculpture, a four-piece dining set that is attached to an articulating float and has been moored in Maine harbors. The work is documented in photographic form and with video footage, as well as a display of the piece itself in the center of the gallery.
We asked Adam a few questions about this project and his studio practice, and you can read his answers below! Make sure you come out and hear his artist talk on July 29th, too.

First things first: how did the idea for this project come about?
I came about this idea like I do most of my projects: I have a kind of databank of familiar forms, objects, structures, etc that I mentally put in different situations. It’s a process of combining imagery and dislocating familiar things. I often work with straight forward furniture forms that are recognizable and relatable, and then I take it out of its intended context. There are things that I want to see in the world that don’t exist, and so I make them a reality.

Can you talk about the inclusion of nautical flags/signals in this piece? Is the idea of communication relevant to your practice?
I’ve always been interested in language and communication/miscommunication. What are the various ways we have developed, either naturally or through careful planning, to convey messages. The flags in general hold a lot of potential for me, because they can be very specific, or incredibly vague. I love that point where a viewer has to think whether they are seeing something that has direct intended meaning, or applying their own meaning. I don’t directly address communication in all of my work, but the flags help me to deal with some other common themes. Namely, most of the objects that I make are intended to be dealt with in multiple scales and settings. The interaction differs from the gallery to the harbor. I want the work to be addressed as a part of the outside world as well as an object to be inspected in a gallery. The flag represents a communication method intended for long distance. This is an alternative method of communicating across great spaces.

Can you talk about the role that humor plays – if it does – in your work?
I try to embrace a sort of dry humor in my work. I hope that viewers can walk away with a range of emotional connection to the work. On the one hand, most of these objects represent a very real part of the human condition in that they address the individual navigating and drifting through, coming to terms with, a vast landscape. The objects I use are simple and familiar so that people can relate to them on their own terms. On the other hand, I embrace absurdity. As a person who’s personality development owes a lot to early Simpsons, I find the best way to address real ideas or issues is through sardonic humor. In social interactions, this sometimes gets me into trouble, but in my work, it is fundamental.

Much of your work involves a response to the experience of encountering a landscape or place. What kinds of environmental settings or experiences of place have had an effect on you? Where are your favorite places in nature (or not) to be?
This work deals directly with how we engage with our place, and how the sense of place can be played with through the use of familiar things or “landmarks” that we associate with places and times in our own lives. my current practice has grown out of the work that I made in graduate school in southern California. From my initial drive out there from New York, to my subsequent desert excursions and return drives, I was blown away by the expansiveness of these sort of abandoned or uninhabitable places, especially the Southern California desert. I immediately began relating these places to the places that I knew growing up in the Northeast, and especially the ocean. I have used these two types of landscapes in similar ways, to put the viewer, by way of the object, in a vast and unyielding environment. The emptiness of the objects invites the viewer to place themselves there, contemplating their own place in that landscape.

My favorite places in nature are also those that I am most afraid of. The ocean and the desert are awe inspiring in that they don’t care about you. In those settings, we are most alone and most aware of our place.

How do you want your viewer to respond to your work in terms of how their sense of place is altered or considered?
I hope that people place themselves in the objects. I usually leave them empty for that reason. This allows for a clean slate for someone to apply their own interpretation. This is why I use things like simple dining sets or lifeguard chairs. Everyone has an experience and emotional reaction based on personal histories, and can therefore enter the work through those connections.

Do you feel like the work you’re making now – specifically this work, and also the Small Craft structures – is directly related to the sense of place that comes from living in Maine, or on the coast?
I feel that I make work based on my current place and I have a very strong connection to coastal Maine. I think there is something unique here in our relationship with the sea and land and our histories of making and working. I think Maine is influential on the work, but more importantly, the sea and how we engage with it.

How do you distinguish the vocabulary you’re using as a maker when you make functional and non-functional art? How do you define function as it pertains to your work?
Function is a difficult word for me. I come from a background in fine furniture design and making, but at a certain point, my work drifted into different territory. However, I have a hard time calling it “non-functional” because I’m not sure what function means any more. when I made studio furniture, it was pretty and it served utilitarian purposes, sort of. In a way, the work I make now functions better. It works very well for what it is intended to do. If I make a boat, no matter how ridiculous and toward whatever end, and it floats, and carries me somewhere, then I suppose it is functional. Staying Put may be absurd and intended for a gallery in the end, but it has been out on the ocean, and will live there again. I talk to a lot of people in the furniture world who look at more conceptual art, especially coming from someone in their world, with a lot of scorn, as though it somehow does a disservice to their field. Lately I’ve been thinking that the shakers made the best functional objects, and any ornamentation and design beyond that is abandoning function for idea and form. I don’t know what that means for what I do… The F-word and I have some issues to work out.

Give us a brief Adam Manley reality tour. What’s a typical working day in your studio like for you?
I teach full time, so a lot of my time is taken up by that, and that is always a healthy combination of rewarding and exhausting. But, a studio day, when I’m really into a project mode? I tend to start pretty early. I like to get as much work as possible done before noon because I slow down in the afternoon. Then generally, if I’m really into a piece or project, I will work another shift late at night. I tend to either be not doing anything, or working like I’m in graduate school again. I don’t do “slow and steady” very well. I’m either on or off. My work tends also to encompass a lot of media and practice, so it is difficult to find a steady flow. I will spend days collecting materials and perusing for just the right parts, then I will hole up in my studio and make like crazy, then there is usually some aspect of the project that takes me, as well as the piece, out into the world and it becomes a photo/video/blog/documentation project. I’m all over the place.

What sorts of things are driving your practice right now – books, films, music, other things?
Right now I am most interested in structures, objects, architecture, and infrastructure from out in the landscapes. I take a lot of pictures and they are mostly of the things that we put into the world to support our existence in it. I’m most inspired by how we have shaped our place through objects big and small.
I’m a serious music collector and geek, but I’ve never found it to inspire my work so much as serve as a companion to it, enhance the ideas I’m playing with, keep my brain occupied while I’m working on it. It is my biggest escape and therefore, I try not to bring it into my work directly for fear I might tire of it.

Who are your art heroes?
I have always been a little embarrassed about my lack of knowledge of the art world. Having gotten my undergraduate degree in Political Science and International Relations, I missed out on that strong foundation in art history and the canon of artists that have come before me. I have tried however to take in as much as I can and am trying to expand my art book collection. That said, there are some people who’s work has really inspired me and influenced my direction. Los Carpinteros (Cuban art collective) and Gord Peteran are two who influenced me early on in my shift from furniture making to furniture based art making, or as Peteran would say “Furnitureal”. More recently, I’ve developed a love for artists like Gordon Matta Clark and Robert Smithson. Artists who addressed the world through art on a grand scale and skewed the relationship between viewers, art, the gallery, and “objects”. In a more contemporary realm, I love Mark Dion and Francis Cape’s work. Both of these artists really approach art in a way that expands the field, whether toward furniture and architecture, or science and archeology. I don’t want to just list all the artists I like, but these are a few that are really important to me.

What’s your next big project?
I have a lot of ideas in the pipeline, but one of my next endeavors is to start pushing my work toward the public art arena. I have proposed some projects before, and been a finalist for a few, but have not yet gotten my foot in that door. I think my work will translate well to the large scale, permanent (or semi at least), public realm. Also, I am always taking my previous work further. I intend to find a harbor or cove to moor Staying Put for a longer period and let it age in its intended environment. I am going to be the artist in residency at UW Madison this coming Fall and so that will allow for some significant development of a new body of work. Check out my blog and website for updates on all that as it gets closer.