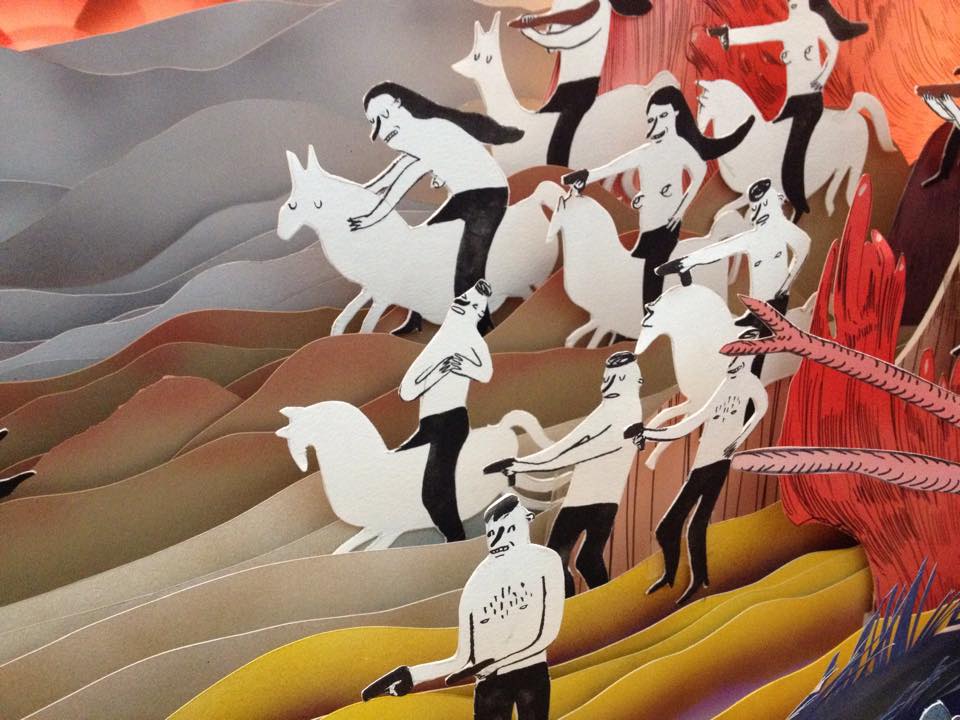 An interview with the Duennebier sisters

Related Links
BATTLE FOR THE SWEETLANDS

Sisters Caitlin and Nicole Duennebier are the artist-team behind our current window installation, Battle for the Sweetlands. In this interview, they divulge the story of the Sweetlands, describe working alone and working together, and talk about tough ladies. 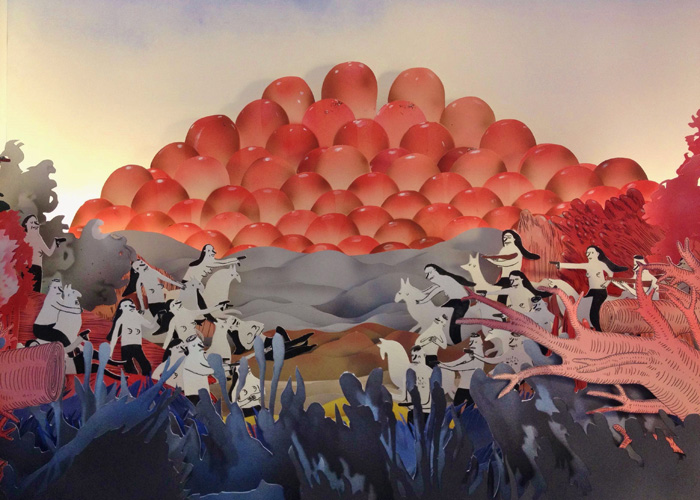 Give us some background on yourselves as artists. What are your individual artistic practices like, and what artists and work are you influenced by?

N: I went to school for Painting at Maine College of Art. Over the past ten years since I graduated I’ve most mostly done painting on panel but set design for theater has always been an interest of mine. I used to make a lot of those little shadow boxes out of cut-out paper. Last year I got back into it when I got the chance to put together a window display for the Somerville Arts Council.

C: I did photography at Mass Art in Boston and studied abroad at University of the Arts London. After graduation I worked a lot in photography galleries and became disheartened by how it all worked. I stopped photographing and started painting for myself. A good friend came to visit me in London and saw my work and put one of my paintings in a show. It’s all sort of snowballed from there.
I work out of my attic. I spend a lot of time up here but I miss the community of an artist studio building. I had a great one in London called Panther House. Nicole, I know you miss your little studio in Portland.* That was a perfect space.

N: Ugh… I can’t even think about my space in Portland without feeling a deep longing. But anyway, I work out of my house now. It’s a really decent space that I shouldn’t complain about.

C: My work often has funny little narratives and I’m often inspired by the work of Bruegel, Hieronymus Bosch and Henry Darger. I always catch something new going on in the scene every time I look at them. They are like movies that you can watch over and over again and have timeless human emotions. What influences you, Nicole, ya ding dong?

N: Eh… so many different things I always feel like I am lying when I just list of few things. Lately I’ve been trying to keep a folder on my computer of all the paintings I come across with blue hills in the background. Studying other paintings has always been very important to me but I’m so all over the place it’s hard to pin down exact influences. I’m a huge fan of Rachel Ruysch, I look up her work whenever I want to feel like a useless horrible painter. For this project in particular I was looking up a lot of Dutch paper theaters. Trying to emulate the delicacy and warm light they have.

In the statement for Battle For the Sweetlands, you reference a specific narrative that informs the visual content of the work, involving a war between settlers inhabiting an invented land, that resulted from a previous project of Caitlin’s called Journey to Candied Mountain. Can you talk a bit about how this narrative developed?

C: I was reading a lot of Steinbeck at the time, which influenced the tone of the work – a dark humor. I think it started with this one character walking through a colorful bush and I thought of it being made of candy. The titles really made the narrative flow in this series. For instance the image of the lady with wide eyes called ‘I can see the universe as it was, a bunch of exploding electric gum drops’. I played with the idea of women and men being equal – both sexes being tough and topless. My friend wrote an amazing short story to go along with the paintings. That really tied it all together. During the exhibit for Candied Mountain the whole story was displayed in pages hung on the wall so people could take away individual pages or the whole piece.
Nicole, what do you think of my characters always being topless? I’m trying to remember if the concept of woman warriors was something from our childhood. Maybe it’s just about mom – she’s always been a tough broad.

N: I’ve always hated the idea that a shirt-less man is the epitome of manliness while a shirt-less woman is vulnerable and shameful. Your drawings bring back that Amazonian woman ideal but not sexualized, just being practical. 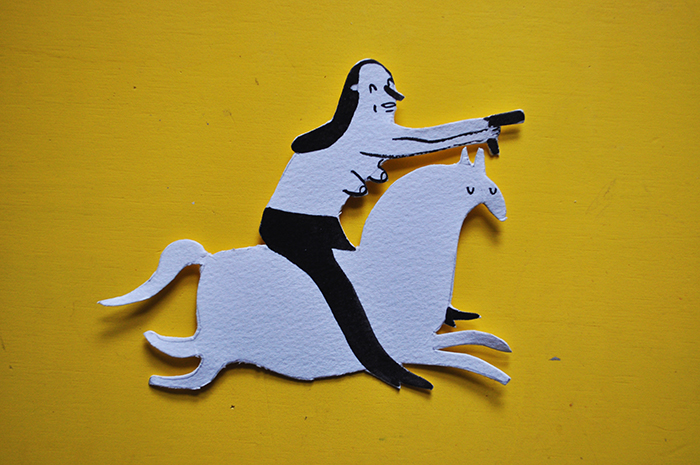 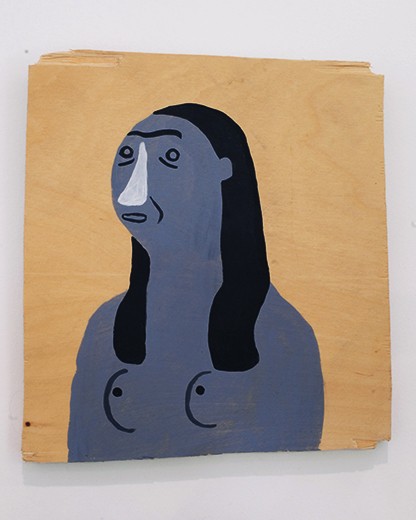 In this story, sweet things are a coveted resource. Is there symbolism there? What’s behind the decision to use candy and sugar as the object being fought over?

C: This again is from reading too much Steinbeck, specifically The Pearl that explores man’s nature of greed and evil. I liked the idea of the object of desire being candy mainly for tactile effect and color as well as descriptions in the stories. “Our minds are wearing with the sight of death but my fingers are sticky and the air is filled with the faint aroma of blueberry strudel” – excerpt from Candied Mountain journal.

N: An environment that is nothing but sweetness with no nutrition sounds pretty menacing to me. That’s probably what is causing all the hostility.

How often do you collaborate on creative projects together? How did the collaboration behind Battle for the Sweetlands work, from idea inception to installation decision-making?

N: We’ve been thinking about collaborating for a while – each of us combining what we like to work on best. I do the scenery and Caitlin does the figures.

C: I’m rubbish at landscapes. It’s been really lovely seeing our worlds come together. We’re good at critiquing and bouncing ideas off each other (except that one time we sent angry texts back and forth for a night). We’re not afraid of telling each other that something looks crap and when we say something looks fantastic – we know it’s not a candy coated lie.

N: Hahaha, You know it’s nothing but straight talk from me. Caitlin and I definitely fill in each other’s blind spots. In some ways many elements of this project were up in the air. We were often working on this project separately and didn’t know exactly how everything would look in the end. It was very helpful to have Caitlin on the other side of things to reassure me that it would all work out. Also, in my work I don’t usually have anyone to blame but myself so it was great to have someone else to blame too!

C: I blame you for getting lost in the car so many times. Nicole is a terrible co-pilot.

C: I’ve been making these paintings in bed right before I go to sleep at night. The images are gettin’ a little weird. Nicole gives me these really old music books from her work and they’re nice to paint on.

N: In an attempt to improve my shadow and proportion I’ve been making clay sculptures to work from. I took a year off from painting after my last solo show to focus on drawing more. Making rough sculptures of the subject I want to draw or paint has been a revelation to me; it’s helped me work with far less frustration.

How do your two very distinctive painting styles inform one another?

C: I guess both our styles have a humor in them – a lot of it being inside jokes and odd daily interactions. For examples (below), Nicole’s painting called Andrew’s Dermoid Cyst is a grotesque fictional cyst from her then boyfriend now fiancé. And my painting of sad tired men marching while women on horseback are making fun of them – called Man Slave Painting. I definitely remember sitting in my studio talking with Nicole about man problems and that I should make a painting called ‘Man Slave Painting’ – and then I did.

N: I’m glad you think my paintings are humorous at times. I feel as though most people see my work as being an “ethereal dream world” or just being kind of gross for no reason.

C: Yes, our next piece together should be called Cat Barf Mountain. 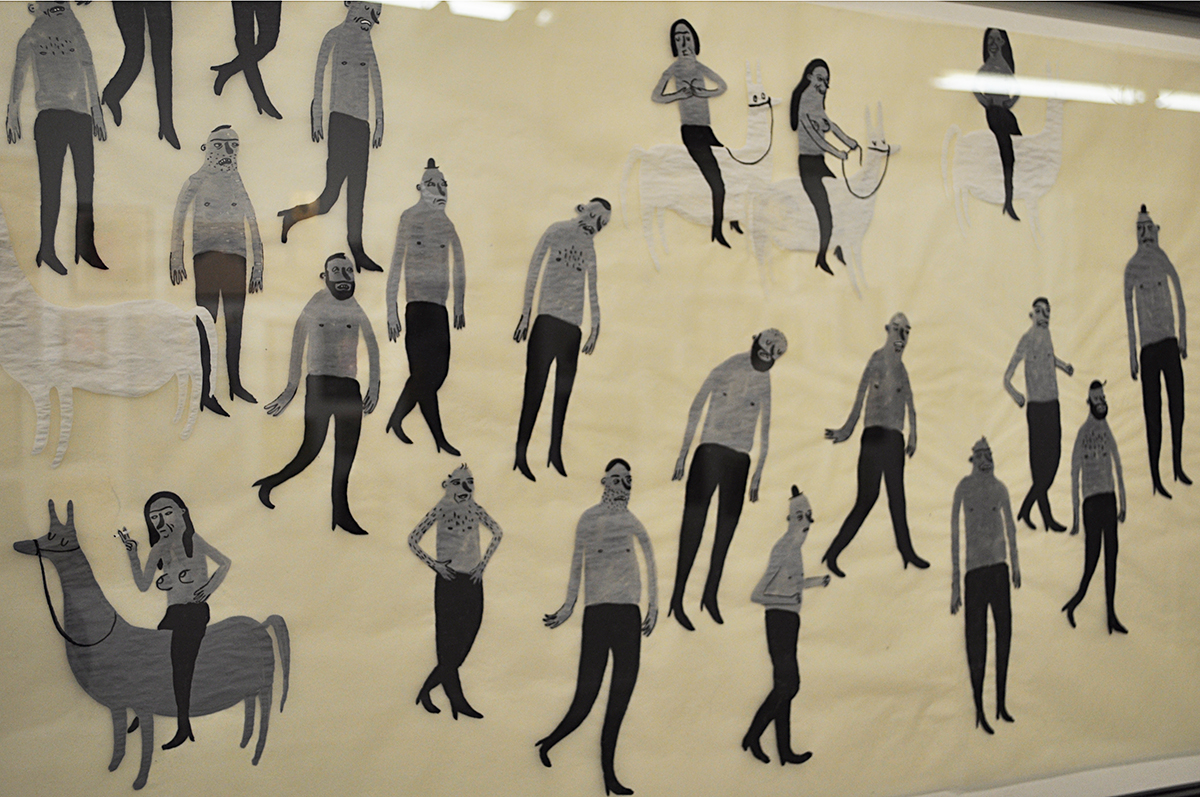 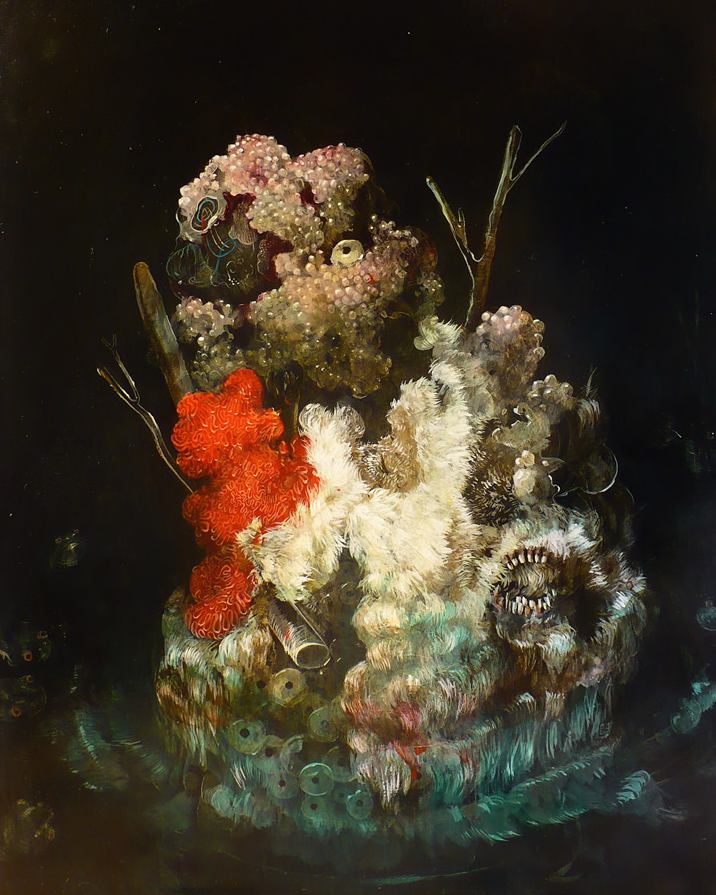 You can see more of Nicole’s work here and more of Caitlin’s work here.
Battle for the Sweetlands will be up in the SPACE window until July 4, 2015. Do not miss it!

*Editor’s note: Nicole’s previous studio was in the Artist Studio Building above SPACE.