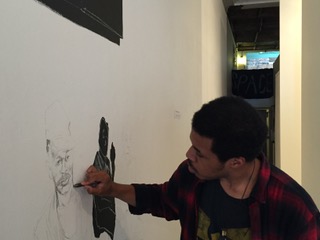 Anthony Young on ‘The Apartment’, Collaboration, and Denim

Anthony Young is a Boston-based painter and multi-media artist. He lived in our residency room to work full-time on his piece as part of our upcoming Exquisite Corpse exhibition.

Exqusite Corpse is a surrealist game where artists collaborate to create the final piece.  For our iteration, seven artists will work in sequence on the gallery walls, each hiding their work form the next. All participating artists have been given the phrase “The Apartment” as a starting point. Anthony is the third artist to bring his unique vision to our main gallery for this project. Exquisite Corpse opens July 15th.

The residency room is our quickly growing program aimed at encouraging emerging artists to bring their talent to SPACE, and allowing them to concentrate and immerse themselves in their work while here.

I found Anthony in the gallery, absorbed in his painting. Generously, he lent me a few moments to answer some questions:

Could you tell me a little bit about your background?

I just recently graduated with my MFA from the school of the Museum of Fine Arts, I’m originally from West Virginia, but currently I’m Boston based. And a lot of my work tends to deal with Race and Identity.

Why art? What made you go down that road originally?

I drew a lot since I was, like, two. And I was just really always interested in the arts. It wasn’t until I was in high school when my mom was putting me in private art lessons, and they started letting me go for free when she couldn’t afford it. And through that process I really focused more on drawing from life, and I really thought of art as a career, more so. And  around that time I also saw my first painting, at a little exhibit that they had, and ever since that I really focused more on art as a possible career.

What does “The Apartment” mean to you?

Hm. When I think of apartment, I tend to think of communities and families and people who are kind of joined together, who usually sometimes have the same, economic or financial status. And usually it was several different people of different ethnicities, or sometimes it’s all one group of people from the same kinda background… sometimes. It just really depends on the area, but I tend to think of it as a community of people there. Usually really drawn together, at least from my experiences in apartments, when you tend to live in them for like, years. You really grow close to the people like family sometimes. Or you really connect together, even if you don’t really speak to each other that much, or you don’t really like each other that much, you still have kinda a bond from seeing each other daily. Almost like school, in a sense.

Have you worked collaboratively before?

I’ve worked collaboratively before a few different times, but not quite in the sense of how we’re doing it, where you don’t see much of each person’s things so you’re just kind of going off of a name, and a little section, so I think that it’s a different experience, but it’s always fun. But I’ve done exquisite corpse before with friends.

On a small scale.

On a small scale definitely. This is the largest [piece] I’ve ever done.

I’m wondering how you see the role of an artist in society, and yourself in that role.

Hm.  I would say… I feel like an artist should really present something new. Even if it’s taking an old idea, it’s showing it in a new perspective. And, I think it really depends on what kind of artwork you wanna make. For me, I think I want art that’ll make a change, or make people kinda realize stuff that they may ignore in their everyday life, and I would say to a certain point, maybe eventually push on past just a studio practice into more, like, a social engagement. I mean, that’s what I personally would like. But I think the role of an artist really is to give people a message, or give them something that they haven’t seen before. And really bring them to some kind of enlightenment. Or just acknowledgement.

Do you have a dream project, along those lines?

If you wanna just talk about what else you’re working on at the moment?

Oh, sure sure. Um, Currently I’m kinda working on I guess like, it’s in its early stages, but it’s pieces using denim. Thinking of denim as kinda like Americana. And the pieces of denim that I’m using are from kinda urban mill jeans, or just urban jeans, I guess you could say. So it’s exploring the idea of black male stereotypes, but using kinda like a hybrid between textile and painting. So it’s a mixture of different textiles being sewn, and also painted and drawn on.

Do you have a favorite work of art? Or an artist that you’d like to be compared to?

Mmm. I don’t know if I would say “compared to” necessarily, but an artist that I really like… I would say I have a few different ones. One artist I really like right now is Titus Kaphar. Oh, and David Hammons.

What’s the best piece of advice you’ve been given?

Lemme think on that for like a minute. I dunno, I’ve been given a lot of different advice. I don’t know if one of them is the best, but one thing my mom always told me was to never put yourself down and never compare yourself to others, because you’re always unique. And that, you’re always the best. No matter if someone is better than you, you’ll always be you. You’re one of a kind. So I would say that’s one thing my mom always told me, and that I’ve tried to stick with, that even though I may not be like the best at the moment, I can’t compare myself to other people ’cause I’m unique in that realm. There’s only one me. And one you.