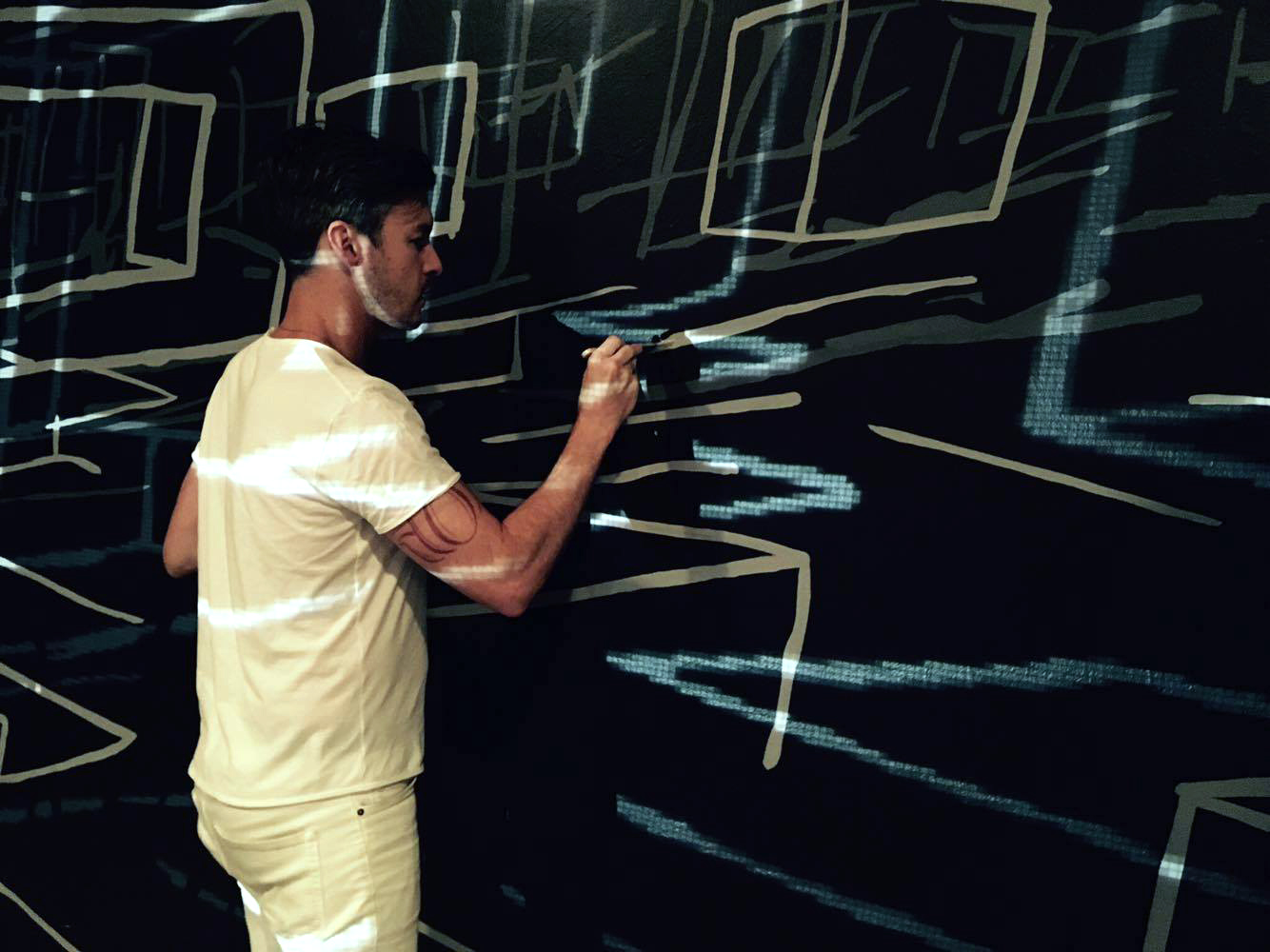 Damien Gilley is a multidisciplinary artist and educator based in Portland, Oregon. We sat down to talk process, motivations, and procrastination methods during his installation of INVISIBLE CITY. The exhibition incorporates two grayscale wall drawings, gathered from his sketchbook and monumentalized on the gallery walls. “Invisible City” opens Wednesday, August 9th, from 6:00-8:00pm, featuring musical accompaniment by Kafari and will remain on view in the main gallery from through December 31st.

Why are you an artist? Is that an obvious question or was there something else you wanted to do?

I’ve always been a creative person, but I didn’t start out in art. First I studied humanities‚ or Eastern Mysticism and Psychology. And that derived a lot of interest in philosophy, so my mind has always been in philosophical tenets of perception and the state of being. So when I started to work casually in graphic design and partially taught myself and partially went to night school at UCLA, I became a graphic designer and I got a real job, and after doing that for three years in LA, I wanted more and I realized I needed to go back to school but I went on a big, crazy trip to India first.

In other words, I didn’t start out in art — I started out more in philosophy and conceptual thinking, and that has driven my work completely. Though it’s highly visual, my work is primarily invested in the involvement of looking into the perception of space and our ability to understand it.

What is the role of an artist in society today, and how do you fit in that role?

There are a lot of roles of artists in society and some of them might be political, social commentary, some of them might be about promoting beauty, but I hope that I land in a couple of those. I try to think of my work as philosophically-rooted in investigating your perceptual faculties. So I believe that questioning your perceptual faculties allows you to look at the world in a different way, it allows you to look at your surroundings in a different way, it allows you to think about the possibilities of things beyond what is real. So I hope that my work talks about innovation, new future forms of structure, new ways of navigation, mapping strategies, and a dialogue between illusion and science.

So you work a lot with the perception of space, and I’m wondering how you bring that idea into the gallery, onto the walls. How do you manifest your ideas physically?

Well maybe I should give a hint about how I make most things: I start everything off with sketchbook drawings. Everything is trying to find gestures and find things that might be useful later. So my sketchbook is filled with projects that I could do — like 100 projects — but I never know which one I’m going to do, and if I find it at the current time who knows because I’ll have to look through all these books and I don’t know if I’ll really see it. But every project I do starts with sketching, and once I find something that can apply to a site-specific context, that’s going to change depending upon the site. So I often respond to site architecture — if it’s physically flat or if it’s bent walls — and I also respond to site-responsiveness, conceptually, of the area, so whether I’m working in Omaha or United Arab Emirates, you’re going to get two different languages that are going to be developed on the wall.

So for this project, it’s really interesting because I haven’t done this kind of project yet where I produce a work that looks like a sketch. So I’m interested in figuring out what is that limit of, “Is the sketch worth it? Is where the sketch is at the best idea, and was I changing it all the time for no reason?” So I want to see what the sketch does when it becomes full size and is that a subconscious way of finding out how to create perceptual spaces.

So every piece is different depending on where you are, and I’m wondering what you noticed when you arrived at SPACE. It’s a building that’s had many different lives — a clothing boutique, a restaurant, a hotel of sorts — so what about this physical gallery space stands out to you as an artist who works in a very particular way.

Well usually when approached for an exhibition I’ll either visit the site in advance or have some kind of particular angle that I should be talking about. But SPACE is in a place I’ve never been — Portland, Maine — and I hadn’t seen more than basically three pictures of the space, which is hard to understand. So when I got here I knew I had to be flexible and adjust my work.

This work really talks about planning more than the space itself. I’d say the sketch is basically revolving around my work — like this is a project based on how you create ideas and how you create architecture when you’ve never been in the space before. Are you just going to show up and get a great idea? Not often. So this work is flexible — I’ve been changing it and re-drawing it in my studio before projecting it here and changing it up and seeing if it actually works. I’ve drawn many different versions and I settled on one eventually and we’ll see how it is executed in the space.

One thing to note is that I knew I was doing this work in an event space, so it’s an energetic performance arena. And so there are subtle changes I made to this: I wanted to be looser, I wanted to have vibration — visual vibration. Usually my lines are super straight, but these are wiggly and gestural. And also everything is at a little angle to create a more dynamic sense of direction — basically trying to highlight the force of the stage. So the stage is sending out these energy signals and power to the people that are watching. And I hope that these walls are going to be supportive of that.

So then if these walls could talk, what would they say?

They would say “you’ve already had these ideas yourself, you’re just seeing them for the first time.”

Easier question: how do you procrastinate?

Oh, I procrastinate extra well. That’s why I create sketches — so I can let them gestate and sink in forever. And then I find out a project — I look through them to try to generate ideas in my brain.

Procrastination for me is hanging out with friends. I procrastinate really well. I’m a project-based artist, so I wait until I know that I’m going to do something. I might practice and gestate ideas and create mood boards and sketch things, but I’m not going to fully dedicate to doing a project until I know I can do it somewhere, because they’re always going to change. There are a lot of projects in the brain that need to get done, but who knows when they will be.

In this time of late capitalism when there’s already so much s*** in the world, why create more stuff?

Ah, good point. Why create art when there’s so much and it can be quite wasteful and nasty? Sustainability in art is not something you’d think my work does, but my work has an extremely low impact. What I’m trying to do is create the most with the least amount of material. So often I’ll use tape, or vinyl, or paint on the wall to create the most visual power I can with the least amount of marks. So often I just put tape on a wall. And I can use five rolls of tape and create a pretty big exhibition.

I once spent $100 and made five rooms filled with all this stuff. It was a gigantic show and it cost $100. And I was like, “Well, that’s fairly reasonable. That’s not making a huge imprint.” So I do think about that — I use simple materials. String, drywall, 2 x 4s — things that can be re-used again. I don’t really use expensive material, so that’s kind of my way of thinking about that.

You work a lot with architectural forms and are always creating these different spaces around the world. But what does home look like to you?

Home in Portland, Oregon, is really good. I love Portland. It’s nature, and the city, and good food and music, and lots of creative people all combined. Other than that, home is probably psychological. I don’t really have a place I say is my home. I mean, I live in Portland, but I think home is where you’re happy. I’m a positive thinker and a creative thinker, and I’m less of a critic and more of a producer, and I think home is where I think you make those positive things happen. As long as you have well-developed friendships and an innovative imagination, you can have the best time ever, and I think I’m doing that right now.

So Damien, I don’t know if you heard, but sea levels are rising, public educations funds are being slashed, the military industrial complex is gaining more power, and rent keeps going up — not to mention that persistence of the hetero-patriarchy. So what makes you keep creating?

Well it’s always tempting to do work that talks about current situations and sometimes I can’t fit a lot of that into my model of working. Though I can — I mean, I’ve made works that have drawn architectures that have both crappy, dilapidated buildings and also beautiful condo towers and mixed and matched them into this miasma of a mess — which is kind of the reality of the States, and the state that we are currently in. And this was during the 2008 downturn, so I was commenting on that all the time and I think that’s what made me use cheap materials. I was like, “I’m going to use cheap materials turning into something that says something about your space you live in today.”

Now all the other things — man, I’m quite a liberal person, and I’m pretty disgusted with a lot of what’s going on. How do I keep making? Again it comes back to what positive thing are you going to put into the world? And my utmost focus is having people have a moment with their own perceptual reality and breaking through and having a moment of something you’ve never seen before. That’s the best an artist can give sometimes.

I have one final question for you. And this comes from the New York Times’ “36 Questions to Fall in Love,” where two people sit down and ask each other these 36 questions and then they’re supposed to be in love afterward. So I pulled one of those questions. What constitutes the perfect day for you?