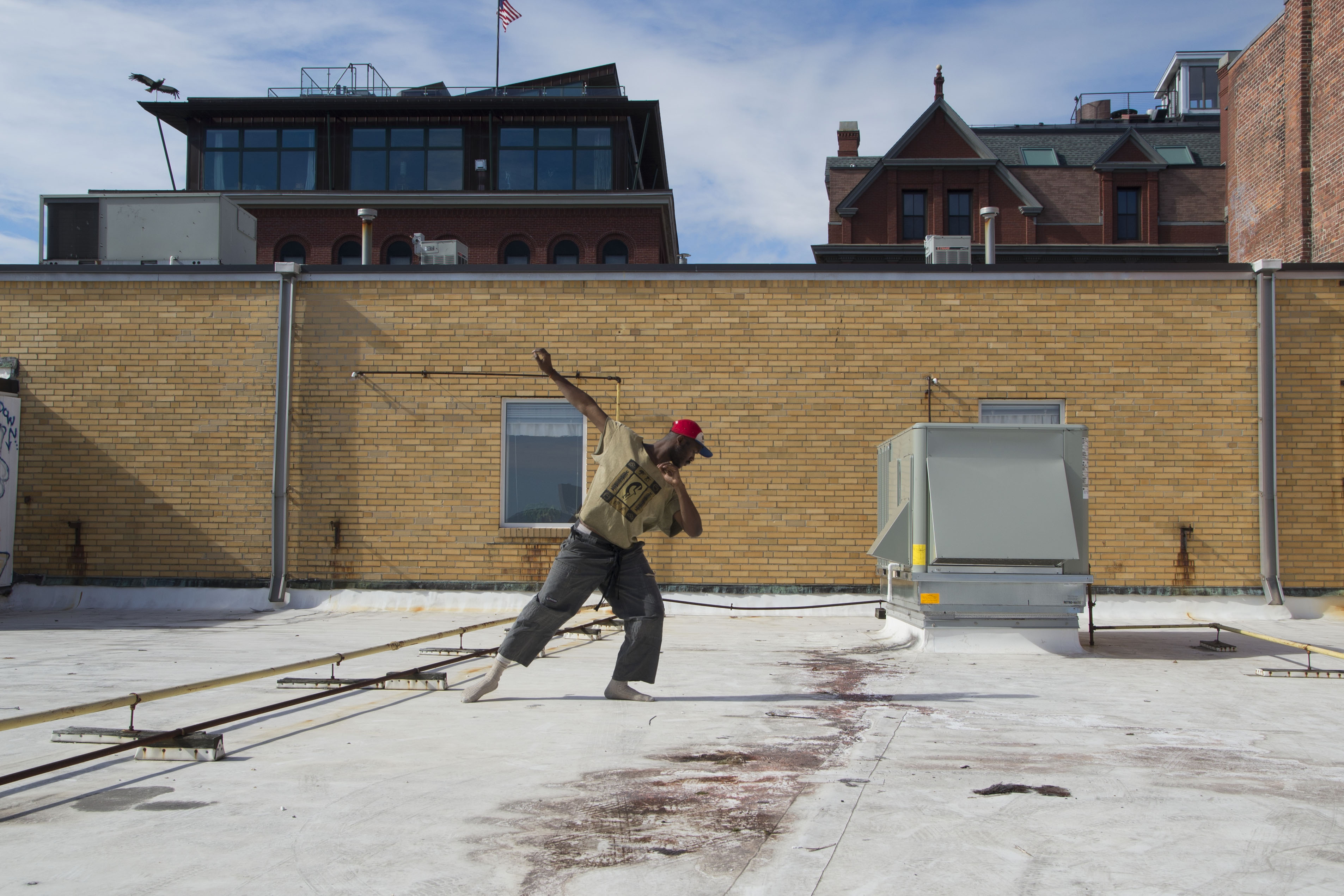 I understand you to be an artist who has paved your own way and created many opportunities for yourself. Could you talk about your experience of navigating the art world as you have gotten more well known?

It has been very fulfilling. I was always about carving out my own spaces and carving my own identity into those spaces. I started doing that when I began working with this manufacturing company called Hartford Denim Company. They were manufacturing jeans, coats, and everything else, but they were also making all this clothing by hand. I thought that was so cool. They were doing the whole industrial revolution thing. It has really been about how do I insert my blackness into spaces that are white, and how do I insert my queerness into spaces that are straight, and how do I insert myself into jobs that don’t even have a position for me, yet. I showed up volunteering for four years until that volunteering turned into a position.

I think that relates a lot to my art making and how I navigate the art world. I was a performer since I was twelve studying at the artist collective but also taking very explicit opportunities that helped me shift my narrative. It was interesting working with top-notch choreographers at a very young age which allowed me to realize that if I wanted to set myself apart I needed to push the boundaries of my own critical thinking. So a lot of navigating the art world was about me navigating where I wanted to put my thoughts and how I wanted to engage with people. Whatever gallery or human wanted to engage with me I engaged with them so much that it spewed into other opportunities and connections which kept going and going and going.

I’m also still very blatantly shocked by my success.  I want to be very focused and aim to be financially stable. I have just been navigating the scene by being friendly, open,  showing up to all these events, by emailing people on a regular basis. I think the art world can be so cruel so anyway I can make it softer. Art clout is a real thing!

You will be performing EQUATORS here at SPACE this coming weekend. Can you talk a little about this project and how it came to the surface for you?

Well, it started on Old Orchard Beach outside Portland, actually, on vacation with an ex-partner. We were on the beach talking about territory and talking about all these people building sand castles and I was like “look at all these people working, they should be vacationing.” I was thinking about this idea of taking public land and drawing a line and putting a stick in it and being like “now its mine. It’s my space and you can’t cross it even though we’re on a beach!”

I was recommended this book by Roland Barthes called Mythologies which I’m currently reading. It is a series of essays by this French literary theorist who invented semiotics and post-structuralism. I have been unpacking this human being’s thoughts which happened to really connect to what I have been thinking about.

I read this publication called The Making of Ferguson which traces back Mike Brown’s death to environmental policies and legislative policies that talk about why black people live in that  area in Missouri and why that area is subjugated to being “dangerous”, though the danger is actually inundated by white folks and systems of oppression, zoning, and red lining. That made me think about all the mass deaths of people of color who are dying from police brutality in warm climates. Juxtaposed with the thought of what if we lived in winter forever? Would there be as much police brutality? Would there be as much black death? I think there might be just as much.

I was also thinking about all these natural disasters that were happening at this time with Puerto Rico. Just feeling very impacted by people who were losing their lives over natural disasters. It felt like the hunger games. It felt like when these storms come, you know poor people don’t have access to safety. They are the first to die and they don’t leave. All these things were cycling and I wanted to give the weather this anthropomorphic quality. What If a hurricane could feel or if it could talk? If a wildfire could describe itself what would it say? Does it feel the lives that it takes?

I wanted to make EQUATORS because I’m always doing things where I have so many ideas that I need to put it into one. I found it to be possible to do that with this project. Equators felt like that line in the sand. I was looking at climates, the arctic circle, halos, the tropic of cancer, the tropic of capricorn, and certain places in the globe where the sun is directly aligned with the earth which makes that place shadowless. I was taking all these things and translating them into everyday moments. Equators has been saturated as fuck in thought.

The way you talk about EQUATORS reminds me of a quote by Nina Simone where she says that it is the artist’s duty to reflect the times, and it really seems like you are an artist of your time. Making the work that you feel needs to be made. What is your personal definition of success and how do you put that into practice?

Whoa! That is so interesting that you ask that because I was just thinking about this yesterday. I think that my personal definition of success is when you are able to get put on and make avenues to put others on. That is a huge part of my own success. I think a lot of times success is undermined by being humble. I am humble and I am grateful but when do queer people of color get a chance to be loud and be proud of their success and take up space while still being successful? That is so important to me.  I think to be successful is to also be financially stable while opening up doors for yourself and others. If I open up a door for myself and I bring three friends I hope later on when they open up a door they are going to bring me in that door too. Success starts to open up loops and wormholes. How are you going to close a wormhole?

Beth Douglas is currently a senior at Maine College of Art. They are graduating from the photography department but they work in many interdisciplinary mediums as well. They are the communications and engagement intern at SPACE.