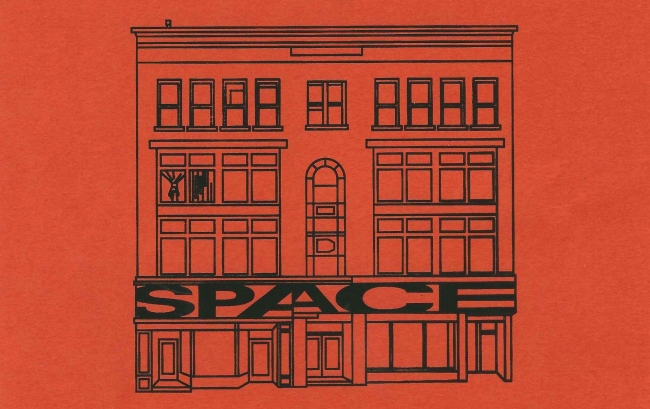 Brendan Shea’s work takes form through painting and installation. Shea explores themes of familiarity, queerness, materiality, and rhetoric. Shea’s installation “<3 <3 <3” is up in the window of SPACE from now through April 26th. In this interview, Shea talks childhood, socialization, coded imagery and modernist tactics.

What was your relationship to making as a child? What kinds of media inspired you?

As child I tinkered with random materials found in a junk drawer: rubber bands, paperclips, magnets, screws, paper scraps, parts of a pen, etc. I was drawn to processes that were intuitive and explorative, I made things to keep my hands moving…

I also have memories of playing pretend with other kids, which I view as a form of collaborative making. When children play pretend they are building a narrative, developing relationships and speaking things into existence. In preschool, we would play house and I would always advocate to fill the role of the family dog….

I was drawn to pretty average media for a child in the U.S. born in 1995. Started with Barney and Teletubbies, then Powerpuff Girls and Courage the Cowardly Dog.  Looking back Teletubbies and Powerpuff Girls definitely informed my painting vernacular.

In what ways do you feel socialization is limiting as we develop? How do you feel it changes how we process information and act?

As we develop, we are still learning how to name the world around us. The categories that we use to identify things are broad and open-ended. This malleability around language and categorization gives us a greater capacity to engage the world as a well round out multi-sensory experience. As time goes on, we still experience the world with all our senses, but a hierarchy begins to form privileging particular ways to think, feel, and learn. We place an emphasis on vision as the most dominant sense and we correlate intelligence with linguistic precision.

When I look at your work and the visual language you construct, I see a space where gender is irrelevant. Your work feels  gender indifferent to me while also not being afraid to use gendered signifiers like a giant fairy princess or gooey baseballs. How do you feel gender and queerness functions in your work?

Without realizing it, we gender formal attributes in the world around us all of the time because they are attributes we would assign to particular bodies and behaviors. For example, a doric column, an architectural feature that reads as strong, powerful, and resilient may feel masculine, because those are traits we traditionally view as male.  In my installation at SPACE I constructed doric columns out of a flimsy paper in attempt to negate or dissociate the language we historically assign to it.

I use the same tactic for the giant coloring book-esque fairy in the SPACE window; it’s imagery that is coded as femme and usually exists on an 8.5” x 11” piece of paper, so me expanding it to exist on a monumental scale, is just another way to present new possibilities while nullifying the normative read of the imagery.

I think another place I see your work blurring boundaries is how you work within a tradition of painting while also primarily speaking in a language of deskillification. How do you see these worlds come together?

My work totally utilizes modernist tactics of flatness and compositions that reference the picture plane. I also deploy patterns, scribbles, drop shadows, and cliché imagery. Doing this in a painting vernacular that is historically viewed serious, is my way of placing cliché content on a pedestal to be rigorously analyzed, while simultaneously transmuting the serious nature of modernist principles. It’s idiosyncratic, but feels right for me.

Haven Douglas is in the process of receiving their BFA at Maine College of Art. They work in the mediums of photo, video, installation, drawing and tattoo. They live and work in Portland, Maine.