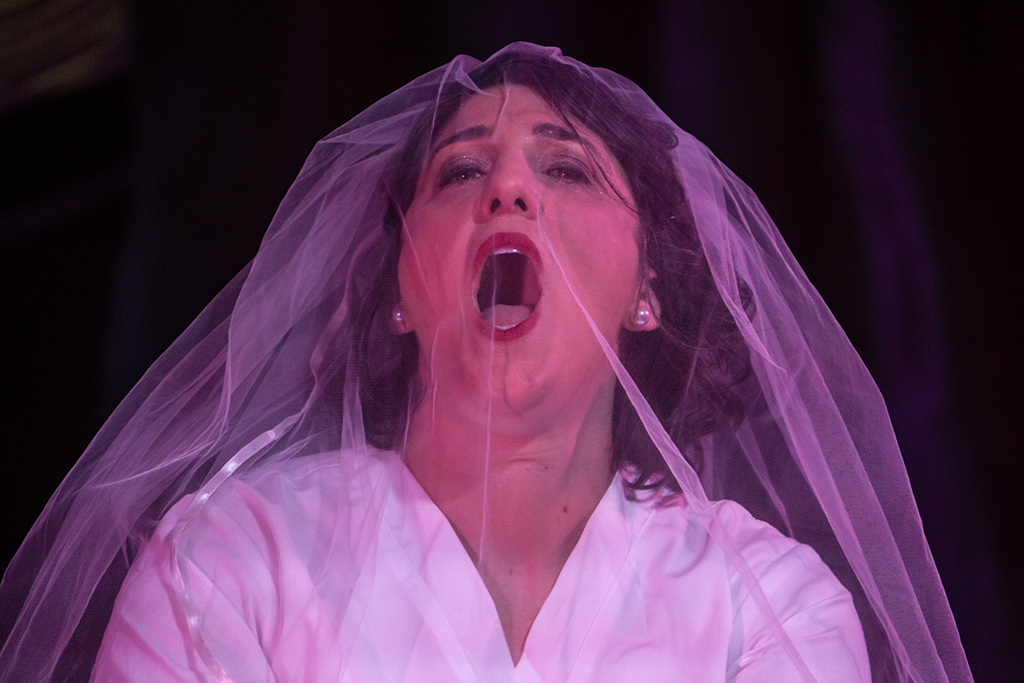 In your creative process, do you have challenges that recur for you?

Balance. Both a blessing and challenge is that I have been producing other people’s work as well as self-producing my own work here and in NYC since I moved here five years ago. And that is in direct conflict with my creative process – when to take off that producer hat entirely and just make a dance.  Burnt-Out Wife is co-commissioned by SPACE and Portland Ovations and they are doing a tremendous amount of work — but I am producing all the minutiae of the show in terms of working with my collaborative team on the artistic outcome. I am also the writer, the director, and the performer. So wearing those four completely different hats has been a real challenge in the making of this piece.

You’ve said, “My body of work runs concurrently with different milestones in my life. 2020 is my 20th year of creating one-woman shows, largely tracking my own experience and rites of passage.” Does regularly making yourself that vulnerable and exposed to audiences ever become overwhelming?

You mean in so far that I am dealing with these very personal topics? Well, what is challenging is that a real life marriage is in play but is also the subject of a performance piece that I am performing in front of hundreds of strangers. How do you really get underneath a marriage and expose yourself, your shortcomings, your partner’s shortcomings while reaching the tenements of what I think a good performance is — and not totally and completely alienate your partner and the marriage that you’ve had for 13 years? Things are happening in my real life that become material for the show but are vulnerable points in my actual marriage. I didn’t make this piece to hurt him, but some parts of the piece may be hurtful to him. One of my scariest moments is that my husband has seen bits but not the work in its entirety. Opening night will be the first time he sees the piece. I’m nervous about that; it’ll be difficult to get through the performance run if I feel like my husband is mad at me because he feels hurt in some way.

Do you think that will hinder your performance in any way?

So do you think you’ll probably be different the next night when he’s not there?

He’s coming the next night. Not only is he coming the next night, but months ago he asked for a public forum in which to respond to the piece, so we have designed a post-performance discussion on Friday where my husband will be on the stage with me, and we’ll engage in a conversation moderated I believe by a therapist and/or certified social worker. We’re basically doing an open therapy session. I  don’t know what to expect, but I’m owning what he had asked for.

What are your thoughts about the institution of marriage? On your website, you write that you would like to see it blown up.

What I’m looking for is dialogue. I’m looking to use this piece as a continuation that I’m not the first or the last to have these ideas about challenges around the construct of marriage. About a year ago, when I decided to make this piece, I was like,” I don’t get marriage. I’m not happy in it, I’m not going to be happy out of it, and I don’t know what to do”. But through marriage counseling, talking with friends, research and ongoing communication with my partner, I’m just now understanding all the stuff in between, all the middle ground for articulating dissatisfaction or alternatives and options. Monogamy is hard; let’s talk about it. I mean, it’s not hard for everybody, but if it’s hard for you, what do you need? I’m not thinking the institution will change, although I certainly have some issues with the concept of forever. And with a real understanding of hindsight, I had no idea what “till death due us part” meant – you’re like oh, ok great, we’re going to be together forever. And 17 years in, jesus, there’s some fatigue. And I think it’s ok to have space to say that and not have to get a divorce and not have my peer group look at me like I have three heads. Where’s the dialogue to be able to find some ground where it doesn’t have to feel so cut and dry?

I’ve heard that you performed a flash mob – before they were flash mobs – at your wedding?

I wanted choreography in my wedding, so I approached my fiancé at the time about creating a choreographed first dance. He’s an artist and directed a lot of my earlier works, so he was totally down with it and we choreographed a dance from Stevie Wonder’s ‘I was made to love you,’ and we had a ball doing it. Behind the scenes, I decided I wanted to do a secretly choreographed dance with my bridesmaids to Britney Spears’ “Toxic.” It was a song that had come up a lot in our relationship as sort of a spoof and the lyrics are hilarious – it was ironic. So we did the first dance with him, and there was a chair, and I kind of pushed him into the chair and then we did the second number. Talk about another scene where the crowd erupted like, “oh my gosh, the bride is ridiculous and has a sense of humor.”  Then a couple of months later, I got a call from The New York Times. I hit the high before everyone started doing choreography and so the dance made the front page of the arts section.

Your team is painting the SPACE performance venue – traditionally black –  a soft-but-intense, extroverted-but-intimate pink. Why pink?

Pink I credit to my costume designer, Carol Farrell: We had a production meeting, I knew I wanted monochromatic and she said I envision pink. It triggered a yes, because obviously, it screams feminine, it’s also intimate and soft. I also have hot pink in it which is feminist and hard and harsh. Coming off my last piece, which was all about the vagina, I was in the pink zone. It pushes against that iconic color and spins it on its side to say no, boys aren’t blue and girls aren’t pink, but we can use it and be in control. I have a great set by Pamela Moulton, a local artist and she does a tremendous job of taking pink to its outer reaches.

Who are your influences?

Deborah Hay, who is a fantastic choreographer from the 60’s. She taps into magic and teaches a lot about magic and performance; taking an intensive workshop from her allowed me to access magic and performance in my work. Madonna, who doesn’t say Madonna? I’m very attracted to Bridget Everett, to strong feminine voices. Adrienne Truscott, I’m attracted to a lot of shock in performance. I would not say shock is in this piece, but I use it a lot for inspiration to help push me to the edge and then come back a bit so I don’t alienate my audiences. There are a lot of artists who do push that edge very successfully like Amy Schumer, and I use her for inspiration and then pull back from it.

How do feminist politics, comedy, emotion come together in your work? What are you trying to say?

I see it as a portal to cut through the bullshit. I’m trying to face my fears and using my love of movement, text, song, audience interaction, and very precisely and strategically, humor to get to the heart of what’s real. I feel a sense of responsibility to use my performance as a portal to the authentic.