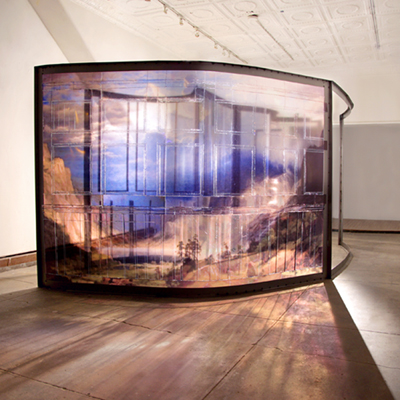 New York, just like I pictured it: artists’ studios and everything

I drove down to New York city a few weeks ago to deliver some artwork we’d shown at SPACE, check out the art fair scene, peek at a few museum shows, and meet up with artists and art space workers. I always have a hard time pulling myself away from the day-to-day activities at SPACE to make these trips, but they’re always important and helpful to my thinking about what new things we can do here in Portland. So here’s a quick hit list of some people/ things I saw.

Recess, an artists’ workspace in Soho that’s  both a studio and exhibition space, had  a project by John Miserendino, who reinterpreted Dan Graham’s original plans for his architectural structures and staged a series of three reenactments inside his Pavilion to translate existing artworks into personal terms.

The Armory show at Pier 94 was too full and crowded to really engage with the artwork, but it was fun people watching and an affirmation that what we show at SPACE is competitive with what art buyers like. Also it seems that its popular to include some kind of mirror in your artwork these days.

The Whitney Biennial had a few gems, and my favorite was the screening room of films and videos by Michael Robinson. I really hoped that the audience would sing along during “Hold Me Now,” Robinson’s  sample of clips from “Little House on the Prairie,” overlaid with the karaoke version of the Thompson Twins’ hit. Say what you will about the biennial phenom–I think people’s expectations are always too high, and no American biennial ever seems to please anyone. If Facebook is any indication, the fake Biennial apology site got more love than the real show.

The Independent Art Fair had more of the kind of work we’d show here at SPACE than the Armory. But it, too, was crowded and cramped. The Moving Image Contemporary Video art fair was a tough visit, too. Imagine a cocktail party full of giant tv screens paired with headphones. But I was glad to see the installation of Martha Wilson’s I have become my own worst fear.

El Museo del Barrio had one of the best outsider art shows I’ve ever seen, called TESTIMONIOS: 100 Years of Popular Expression. I particularly liked the room of paño (handkerchief) drawings, painstakingly elaborated by Chicano inmates in Texas. Go see it before it closes on May 9th.

The Cindy Sherman show at MOMA was a good reminder of the importance of seeing photography printed large in its full majesty. Also while at MOMA, I got to see the final day of the Reanimation Library‘s interactive installation in the education building, where visitors were invited to peruse an odd assortment of books to scan, copy and repurpose into new artwork.

Over in Brooklyn I had great conversation with Jen Rosenblit about her ideas about dance and what happened during her recent residency at Bodega. We talked about the fact that most people don’t have adequate vocabularies for discussing dance and movement and that it’s frustrating to hear someone compare her work to painting or other visual mediums.

The highlight of my trip was an open studio tour of the residency program at the Lower Manhattan Cultural Council’s Workspace location, in the financial district. In three short hours I was only able to see about 15 of the 25 studios, because of the great conversations I had with the artists. I was particularly interested in:

I also checked out the New Museum Triennial The Ungovernables (confounding), The Dependent Art Fair (MFA hubris?), a new show at Primetime (all purple) and had a wonderful dinner chat with Yanira Castro, a choreographer with whom we hope to do a project in 2013.