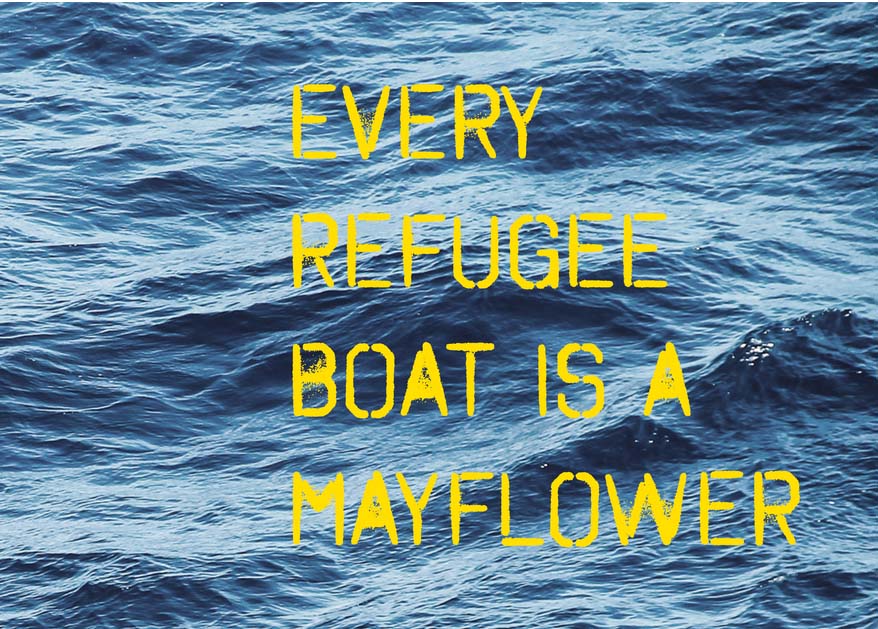 On Freedom, For Freedom

The countdown to the 2018 midterm elections has been a political moment marked by its overt division in public discourse and a disturbing trend of tumultuous violent events. I know I am not alone in saying this moment has been exhausting. However, civic participation is more crucial than ever before. With that in mind, we at SPACE have been honored to be a partner in the 50 States Initiative of For Freedoms, an exciting platform for exploring pressing civic issues leading up to Tuesday through the arts.

In our window gallery we’re hosting a work by artist and writer Christopher Myers (“Every refugee boat is a Mayflower”) with a trail of vinyl-printed waves that extend all the way across our building to Maine College of Art’s windows. Plus, inside MECA you’ll find a great group of student work responding to the greater For Freedoms project in their Artists at Work Gallery. On SPACE’s flag pole we are presenting a work by transdisciplinary Diné artist Demian DinéYazhi´ (“PROMISE ME YOU WON’T COLONIZE ME [mars]”) born to the clans Naasht’ézhí Tábąąhá (Zuni Clan Water’s Edge) & Tódích’íí’nii (Bitter Water). Both works were intended as part “billboard” projects of the greater For Freedoms initiative, however in Maine we have a uniquely difficult hurdle for participation as billboards are illegal. CMCA cleverly situated Myer’s work as a large ground-sitting side inside their courtyard while we have hung the billboard in our window gallery space and activated 125 feet of glass storefront with the vinyl addition. As a former Congress Street storefront, this space maintains elements of the flirtation with the realm of commerce that billboards similarly occupy.

The installation has also sparked some community feedback with Christopher Myer’s evocation of the Mayflower as a historical symbol. While many of us may agree that the Mayflower was an agent of colonization and did quite a bit of harm, it occupies a place in the American historical imagination set by high school history class myths that continue to be its only point of historical interpretation for many citizens in this country. But by evoking that image, of a brave passage of persecuted individuals, Myer’s work aims to connect contemporary widespread fears of the unknown with those known American histories. It asks if things are so different, and what historical and cultural lenses we are digesting our news from.

In the German language there is a word, vergangenheitsbewältigung, which translates roughly to “working through the past.” It is a term that developed out of the need in post-Nazi Germany for public debate, personal soul searching, and civic restructuring in a country that had to grapple with perpetrating a genocide. We have no word for that in English, nor do we have a mainstream effort to come to terms with our colonial past and the genocide of indigenous American peoples. But art can be an interesting site to tease out these issues. Instead of telling us how to feel, or what a solution is, these works both make deeply provocative statements that point to our histories and our futures. There is no “wrong” interpretation of these works (just like any work of art) but they are intended to start conversation. And as intended by our staff, they should be read in conversation with one another as we all try to navigate where we go from here, how we mend our world, and how we dream of new worlds while carrying crucial lessons from the past.

I want to give big kudos to our visual arts programmer Elizabeth Spavento who foresaw how the naming of the Mayflower history could potentially muddy the dialogue that is so crucial and necessary in this work. By pairing Myers’ work with that of DinéYazhi’, Spavento made a curatorial pairing that contains a sophisticated and difficult dialogue with one another. When we address colonial histories in our work as a cultural platform, it behooves us to simultaneously work to decolonize our institution through the elevation and celebration of Native voices. In the work of DinéYazhi’, a lone mars (not unlike the famed Blue Marble photo that made Earth appear so fragile in the dark expanse of space) begs us not to colonize it.

As a Mayflower descendent myself, my ancestor came here as a religiously persecuted individual (a memorial at his grave reads “They believed in religious freedom.”) who entered into indentured servitude to gain passage to the new world. That being said, like all early settlers of the Americas, he became part of a force of widespread colonization, foreign disease, genocide, and cultural eradication that we must all grapple with. The narrative my history class and family told me was quite different than the one I have come to understand through historians, indigenous activists, and a lot of reading. Not shy to complicated and problematic topics, this is the dialogue we must have by exhibiting this work. Having an occasion to talk about it is good for us – it’s the vergangenheitsbewältigung we must undertake.

A couple of years ago I had the privilege of traveling to Sicily for an international exchange between artists that culminated in an exhibition, Due South. There, I met with North African refugee teens running entrepeurnerial cooperatives like the restaurant in the 11Eleven contemporary dance center in Catania. But on the coast I also saw the “graveyards” of migrant boats in the Mediterranean first hand. The crisis may seem far removed to some of us, but the scale of the global migrant crisis cannot be minimized. Boats originally used for short distance livestock transport, coastal fishing, and local shipping were occupied by hundreds of people for longer distances than these boats were intended for. These relatively small crafts were overwhelmed in scale by the piles of life preservers worn by their occupants. No one chooses that journey if there isn’t something horrible to get away from. There have been massive accidents in these treacherous voyages, and many who have risked these migrations have lost their lives. (I suggest you take a look at transdisciplinary artist, Xaviera Simmons’ wall-scaled installation of photographs documenting the overcrowding crisis of nautical refugee exoduses). Ultimately, we live with global inequality and those attempting to traverse those inequalities by changing their global position are urgent reminders of the freedoms we all deserve as basic human rights.

To evoke Norman Rockwell’s paintings of Franklin D. Roosevelt’s “Four Freedoms” (1941), for which the For Freedoms project gets it’s name, we deserve:

Founded by artists Hank Willis Thomas and Eric Gottesman, For Freedoms began as an artist-run Super PAC (Political Action Committee). Moving towards the 2018 midterm election the platform transformed into a nationwide project of collaboration and dialogue. Using the “preexisting cultural infrastructure” of museums, alternative galleries, nonprofit spaces, and public art programs, For Freedoms activated hundreds of sites nationwide with hundreds of participating artists. They are currently using four major modes of artist and participatory activation: billboards, town hall meetings, lawn signs, and exhibitions. While there are only mere days left before the midterm election- check out their open source toolkit for each of these projects here. One thing of note to look for within is their beautiful lawn sign designs you can download, print, and fill out, which are sure to make a statement in your community and are a way individuals can engage with this project.

Eric Gottesman joined us in Portland, Maine yesterday at MECA’s Arts + Politics symposium on the occasion of the Making Migration Visible exhibition. Gottesman spoke and questioned what might be next for the project. It is a cultural collaboration unprecedented in scale across this country, and we certainly look forward to whatever form it may take next. With elements of the project on the outside of our building, we are rethinking civic engagement in a world muddied by fake news, tampered elections, and divisive civil discourse. This moment in America needs the public activation and community disruption of For Freedoms, so please follow them on Instagram to see what’s next, and we hope to collaborate with their next iteration in the lead up to 2020.

Poly Styrene: I Am a Cliché
Wednesday, February 2 2022