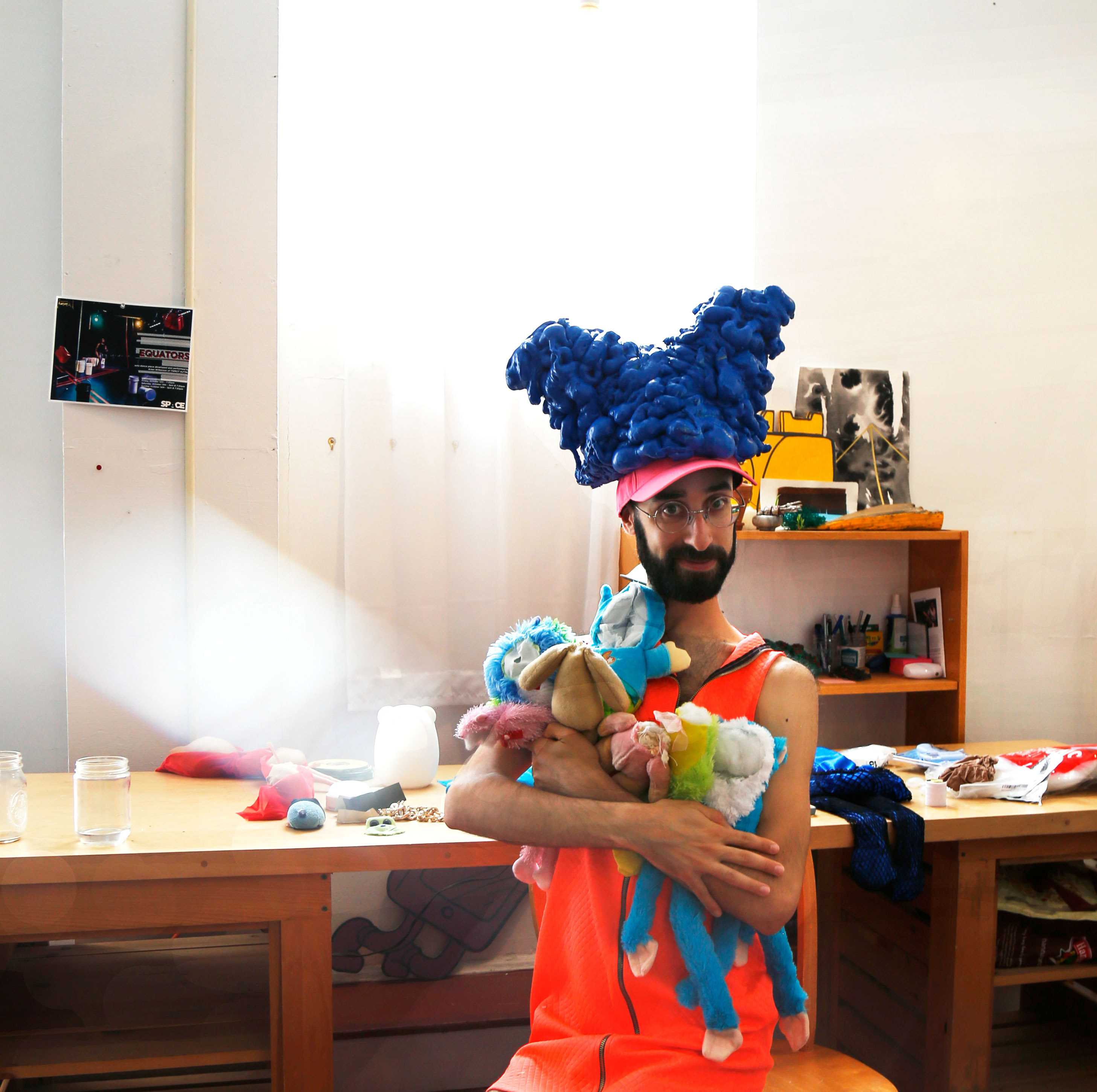 Q & A with Minivan’s Ron Shalom

Minivan is the electropop drag project of Ron Shalom. Living in a realm between music, performance art, and theatre, Minivan deploys live-controlled custom lights, instructional dance, costumes, and advertisements to navigate seven distinct character transformations. Minivan’s debut LP, CreepySexyCool, came out in 2018 after Shalom previously released Weight of the Water with his baroque-pop ensemble, Fers Yn Ri. In addition to these projects – and arranging and composing for film and other media – Shalom also plays bass and daxophone in a composer’s collective, which performs as the Daxophone Consort and the Tinnitus Music Trio. Ahead of his July 12th performance here at SPACE, we sat down together to discuss his creative practice(s), minimalist drag, negotiating consent, internal and external transformations, and porn. You know, typical Friday afternoon discourse.

Minivan went from a giant mess to a period of radical reduction from which things could blossom again. I realized I could dramatically reduce everything to lights, costume, dancing, and focus on those things onstage while letting the sound do the rest of the work.

What bloomed from that reduction is the 30-minute show that I travel with. Portland’s Waking Windows festival last year was the first road test of the show. Everything had to fit inside one suitcase. This constraint on portability informs all my decisions around the technical scope of the performance, a requirement to do as much as possible with as little as possible. I think this ideal, of economy and material, motivates all of my work.

I’m very much a student of drag. There’s a tradition of drag that I admire from afar, a classical sense of craftsmanship among queens and kings who are experts in makeup, costume, and movement. They have honed the Kabuki-like melodrama of facial expression and the standard in that world is immaculate performance. But I’ve embraced calling Minivan ‘bad drag’ as a way to recognize how that tradition impacts and inspires me while finding an opening into it for Minivan’s ridiculous minimalism. My aim is finding the smallest necessary gesture to convey the largest possible presence. What costume changes can I do in 30 seconds? What are the least accoutrement necessary to portray an entirely different character?

I’m still learning very much about her. But first I should tell you about the ‘Ineffable Multiverse,’  a living sci-fi, graphic novel utopia. Minivan is one aesthetic Reality within a multiverse of Realities. It is one of seven distinct aesthetic outlooks on the universe. Their task within this multiverse, as they discover themselves, is to acknowledge, reckon with, and work with each other to stop climate change.

I have two ambitious purposes for this. On the one hand, I want to devise a fantasy model of how people who have unresolvable differences can work together. Aesthetics is not a matter of compromise. You prefer what you prefer and I prefer what I prefer, as a matter of taste. Aesthetics are not neutral, but they are deeply mysterious and (despite what some saucy queen might tell you) ultimately there is no such thing as aesthetic correctness or authority, which is why they resist political negotiation. This has helped me establish characters who were never expected or able to compromise on their inherently insurmountable differences. But they have to work together despite those differences and find ways to use them.

The second part is that I want to present a utopia-fantasy of how we don’t just survive but thrive in the face of the abysmal consequences of climate change. There are plenty of artists that I admire steeped in dystopia. I think that’s important and beautiful – we need literature and art and people reckoning with the almost certain direness of the future. But we also desperately need models, fantasies, and concrete ideas for how we can grow through this. In my mind, we’re either doomed to catastrophic failure or we’ll transform society through this incredible, inspiring metamorphosis. I’m fixated on that fantasy, which might be irrational.

Writing lyrics for me is a challenge of saying true things. I want to use the least amount of words to say the truest thing. Who am I? – It’s a bunch of questions about consent and desire, but in the big picture, it’s about identity, and identity in relation to someone else. Figuring out who you are, when who you are to someone else is in question.

I find questions are a lot more potent than answers. That’s why in trying to say true things, it often ends up becoming, how do I ask the right questions?

It’s really easy to be disassociated from the body. Creating work about my colon and my genitals can be a way to acknowledge how I use them and what they do to me, but it can also be a distancing technique. It is sort of easier to make a catchy song about sex then it is to talk or think or feel about sex, which might be more disturbing than the (literal) song-and-dance.

I think both ‘Hotbox’ and the ‘Mobile Colonoscopy Clinic’ try to be funny. For the latter, I was the doctor and my Cult was a group of ‘nurses.’ In the patient’s walk-in visit, we would talk about their love life, their last poop… and I would give a diagnosis that was more like fortune-telling, and usually about their love lives. And they also got to watch their own colonoscopy, which was something I was really upset about with mine, they didn’t let me keep the video of my procedure. So the ‘Mobile Colonoscopy Clinic’ was a way to focus on the patient’s internal life. It’s real and it’s a joke, at the same time. Accepting and denying one’s bodily processes in the same breath.

One doctor described colitis as an autoimmune disease where my cells are play-fighting with each other and getting out of control, which essentially leads to my colon eating itself. I thought that was inspiring and terrifying.

Trying to manifest those internal transformations, it’s worth looking at porn. I think of this one company, Treasure Island Media, where a lot of the scenes are between serodiscordant men. What their audience really wants to see is that moment when a guy gets infected with HIV+ semen. But if his dick is inside some guy’s butt, they’re not going to see it. The audience has a really literal need to see that transformative moment happen, but they can’t. Sometimes there’s a compromise: maybe they ejaculate on the person and then stick it in his butt, for example. But I like the dilemma of how we perform an invisible, interior change. How do I know this is real? That question really inspires me, because performance is a fantastical leap of the imagination that helps us examine internal transformations, and we’re all constantly performing. Fantasy can guide us in grappling with reality, and then it can become real.

Minivan asks nothing of the audience. It is a pure spectacle. To Minivan, no questions need be asked.