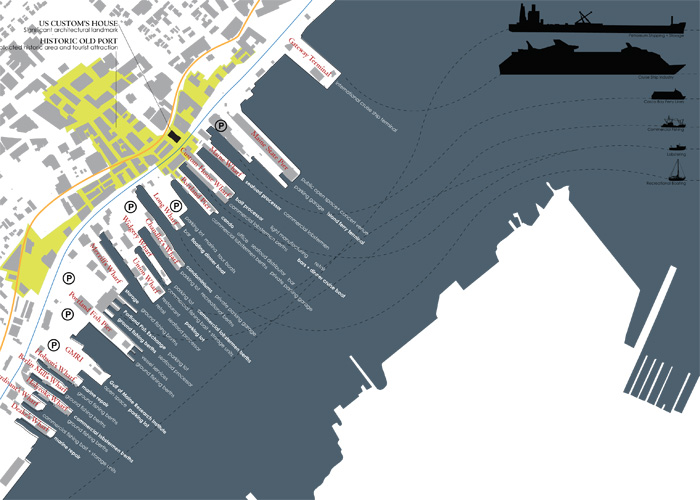 Waterfront Visions 2050 is currently on view in our main gallery through December 21. This exhibition, organized by Portland Society of Architecture, addresses the adaptation imposed by sea-level rise on the Portland waterfront and offers design solutions for its future development.

We had a few words with participating architect ALAN KUNIHOLM about the show.

SPACE: Can you describe how you were inspired to begin this study and exhibition?
AK: As an architect I was designing a new project down on the waterfront about five or six years ago. In one of the public presentations someone asked what our plan was for access to the project considering rising sea levels. I had no answer. I had the same question asked when several years later I was working on a major project in Bayside. On the Bayside project we decided to pick up the grade floor level and minimize occupied space that might be at risk because of the history of flooding. I am also inspired as an architect. The buildings that we design today have the ability to last 100 years or more.

What do you hope will come from the visioning workshop at Space Gallery?
The visioning workshop will be on Friday morning and will involve a number of roundtables that will be facilitated by members of PSA. The focus will be on recording ideas and visions about the future of our waterfront on Commercial Street and how we can (1) Adapt, (2) Retreat, or (3) Fortify this important edge of the city to minimize risk due to climate change while at the same time collecting ideas from professionals and property owners about opportunities for growth and maintaining our historic fabric.

What do you think will surprise people the most about the impact of sea level rise on Portland?
I think that most people in Portland are informed and educated about climate change and how it will affect sea level rise. What they and all of us lack is the sense of time over which we are talking. It is hard to react and plan for change, especially when it comes to urban planning. It is important to be having these discussions now. I think many may be surprised by what the current data is now saying about rising sea levels and the added impact of storm events.

What vision of the future of Portland’s waterfront are you most excited about?
We filled in the waterfront along Commercial Street, we filled in Bayside, we filled in a lot of what Portland was originally. Now the water wants to take it back. Many other cities and cultures that live on or near the water have been dealing with the effects of climate change, and we can learn from them. That is part of the idea of Waterfront Visions. I am most excited about our waterfront because of its eclectic nature, the many uses it supports, and maintaining that vitality. There are many projects before us poised for development along the waterfront, it is a chance for us to be proactive about our planning efforts.

How important is it for Portland to begin planning now for sea level rise?
The IPCC (Intergovernmental Panel on Climate Change) just (Sept 2013) released new updates to their data. We are benchmarking our work based on this model – 24” of sea level rise by 2050 and 48” of sea level rise by 2100. These are mid-range numbers, not the top, not the bottom. In addition we need to account for the added frequency of storm events. The City of Portland has been very helpful in working with us in determining what to benchmark. It is important for us, both as residents and property owners, to understand how we might be at risk to climate change. Have we located emergency generators below grade, are our utilities at risk, will we be able to get into our building, will we lose some of our historic buildings? All important questions to be asked as we move forward with our planning.

What lessons can we learn from the Waterfront Visions 2050 Exhibit?
The exhibit will include photographs of various responses to sea level rise from around the world. Jessica Wagner Kimball’s landscape architecture thesis project focused on Commercial Street and the piers and will be part of of the exhibit. On one of the walls we will represent Commercial Street with referenced sea level rise benchmarks. During the Friday morning session we will be asking the teams to collaborate on this issue. Their responses and visions will be added to the exhibit that will go through December. There will be links to other events that will be happening during this time period for those who want to participate at other times and levels. This is a difficult issue that requires an on-going conversation by many players. My hopes for lessons learned include making folks aware how we might be at risk, looking at how other communities and cultures have been dealing with this issue, and what are the possibilities and opportunities for us to work with this change.

What made you decide to partner with SPACE?
SPACE is always outward looking celebrating and sponsoring ideas/issues that affect us all. The idea of SPACE hosting and collaborating with PSA also supports PSAs mission of connecting with other creative organizations that have similar goals and missions – enhancing our sense of place and community dialogue.