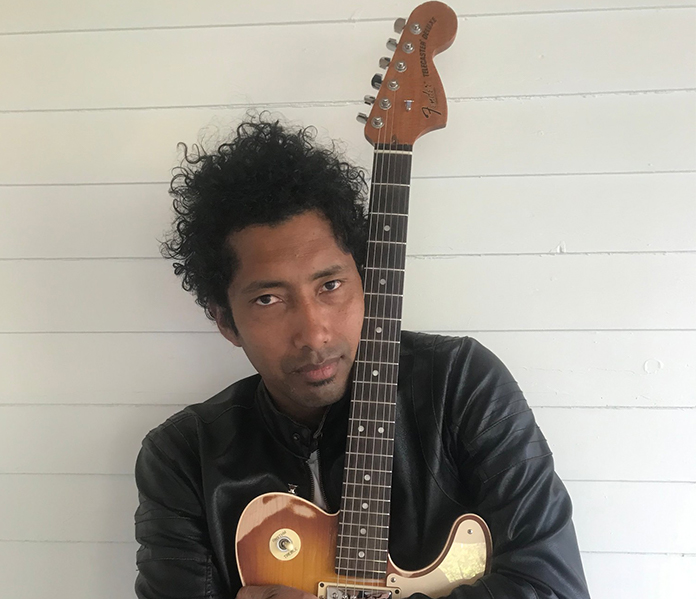 This July, Kilston, a SPACE summer Storytelling and Engagement Intern with Bates Purposeful Work, sat down with 2022 Kindling Fund Research and Development Grantee Alejandro Graciano. Administered by SPACE, The Kindling Fund is one of thirty-two nationwide re-granting programs established by the Andy Warhol Foundation for the Visual Arts.

Kilston-T’Naya Lee: The first question I have is at what age were you introduced to music or started playing an instrument?

Alejandro Graciano: To me it is a broad question, but to me I believe that if your parents listen to music when you are in the belly you become a musician. So for physical instruments, I have played instruments since I was a little kid in my village. We played pots, we pretended to be in bands, but it was not like something serious. We were just kids, but I became serious at 18 years old, and that is when I bought my first guitar to become a serious musician. So at 18 that’s when I consciously said I am serious about music.

K.L: When was uncovering Afro traditions something you realized you wanted to do?

A.G: It happened when I realized I was not a regular Mexican, and realized I was Afro Mexican. I used to play Afro Brazilian music and I would play Capoeira, which is a Brazilian martial art and people kept telling me that I was Brazilian. I had dreadlocks, I was dark and everyone said that I was everything but Mexican, and I would ask people why are you saying that I’m not Mexican. Don’t I look Mexican? Then I researched and I found out that I was Afro Mexican. I wanted to educate myself and pass it on to other people of Afro-Mexicanisms and afro cultures through music.

K.L: When you first decided to pass on afro traditions in music how old were you at that age?

K.L: And you already knew how you wanted to do so?

K.L: What would you say yourself is?

A.G: I’m Mexican. I’m everything. When I describe it when I put it on Facebook and Instagram is that I am an Afro-Mexican musician that mixes African, Latin, and blues into a unique sound. Since I was a kid I got all the music, but when I came to the US I learned about rock and rap, and then later on in my life I learned about the blues. So everything came to a combination and now that I do music I mix them all.

K.L: And Blues, you learned about in college?

K.L: When it comes to musical traditions, what do you look for in music, the way people behave, the lyrics, the rhythm or the emotion it makes you feel?

A.G: I think everything and I think to myself as a grownup it used to be about the music and rhythms, but now that I have grown up it’s about the lyrics. Now I’m starting to be like the bass is complementing the drums, but I’m starting not to get too much into it, but it is now more the music and the lyrics. I have learned that the word is a powerful tool and you can put a spell on people or you can unspell free people. I try to be careful of what I say and when I listen to people’s lyrics and see that they are in a negative place it just brings me negativity. I’d rather not listen to it. That’s why I listen to music. I do not understand the language of the sounds and music.

K.L: In the car we talked about high vibrations. Would you say you prefer to listen to those frequencies over lyricism?

A.G: I tend to go for what they call world music, but I call it ethnomusicology in my field which means it is rare music. If you went to a village they have their own music they play for their village and that is considered to be an ethnomusicologist going in and documenting that. When it comes to music I do that. I don’t listen to a lot of today’s music anymore because it puts me in a negative space in my head, but the rhythms are nice though.

A.G: In general the whole culture. Mexico has the highest percentage of Afro-Mexicans now living in Mexico and their music is everywhere everyday in the morning. when you wake up it’s everywhere on the radio. It’s just that. I can’t pinpoint any Afro-Mexican that’s mainstream. Wait there’s Miguel. He’s part Afro-Mexican. If you look at him he looks just like the people from my country. From my area. So something like that we don’t have. The whole culture of Mexican music is underrepresented so I’m making a good claim for this.

K.L: So do you think an artist like Miguel is doing enough to bring awareness to Afro-Mexican culture?

A.G: He’s too busy and once you are of color what you tend to fall into is black culture. Like hip hop or rap. Mexicans and Filipinos all speak like Afro American people here. They get into that. It would take him maturity and learning about the culture. He has spoken about it I believe, so it’s going to take him maturity to get to a place of where I am from. He’s young and too busy with mainstream black culture in America. He’s seen as a black man.

K.L: Do you think that if you weren’t raised in Mexico you would have neglected your culture?

A.G: I was 15 so I think I was on the cusp where I was old enough where my heritage, thoughts, and culture was not taken away. I think I’m so Mexican, but it doesn’t seem like it. If not I would be black and sound black if I want to. I tried and it felt like I was pretending. I can’t live like that, but I would definitely be or act black if I were born here.

K.L: What are the most memorable traditions with Maine Music Collective you have uncovered so far?

A.G: Meeting African musicians, for example, I met a man from Mauritania,  Africa. His name is Baba and he plays the guitar, he does it for fun because he loves music, but he doesn’t do it for a job. We played a rhythm called Douga which I found out sounds like the mother of blues or the beginning of blues. That was amazing to me because it sounded just like the blues but it’s older, a little bit older. Another one is when I met with a Brazilian man and other African men and we jammed and we got to play music together. That was most memorable to me, but I found out that it’s not hard. When I first started this, every time I saw a black person I was assuming he must be a musician. You know how some assume all black people can dance, or jump, or play basketball? I was mistaken, not every black person is a musician. I learned that, and now I can see who the musician is through this process.

K.L: What if everyone is a musician but isn’t traditionally trained?

A.G: That’s true. To answer that, I see everyone as a musician. That’s why I made a mistake thinking that everyone is a musician. Now I go with, if you are a musician, that is going to be your profession so that is where I’m at now. Now I’m looking for a professional musician, but yes everybody is a musician, especially Africans. They know how to play the drums because they’ve seen it in the village and dances. If they never played the drums before this thing comes out of their hands because they know rhythm is inside them, but it’s not their profession. That’s maybe the mistake I made. I learned to decipher now and approach them differently.

K.L: Being that you are Afro-Mexican and work with African people where do you see an overlap in terms of cultures?

A.G: Here as a Mexican I am focused mostly on the African side because I am also Native American. Native-Mexican. We talk about the diaspora and everything, but if you talk to an African person who immigrated here about diaspora they usually have no recollection, so they cannot relate to you. They have different ways of thinking about it. They’re more focused on daily life and struggle. They have to work all those things and that is what they are going through. They will get there because they live in the US and will have to learn that.

K.L: Do you think it’s because a lot of the immigrants are first generation compared to African Americans over centuries?

A.G: Yes and they don’t teach them. The way they teach is different. The older generation of Africans most of them are older moms and dads and are taught colonial thinking from the British. They’re oppressed in their ways and it is heavy for them. There are times Africans bleach their skin to become white. There is oppression in Africa too that we don’t know in the US. They don’t really know the African Diaspora here.

K.L: Do you think your project will ever end? I think it is something that will be ongoing.

K.L: Is the Maine Music Collective self-fulfilling? I feel like the work you are doing is fulfilling your soul and to you it may not feel like you are doing a job which is a good thing. It might feel to you as if it’s your purpose.

A.G: Whenever you do something you love, time doesn’t phase you. I think that’s every person’s goal, every human person, every artist wants to have something they love and make money. If everyone did so the world would be less chaotic.

K.L: What do you think about the idea of using music as a form of therapy?

A.G: I do that all the time. I’ve done experiments on myself. I’ve done experiments with nature, birds, trees, and water. I used to go play music to the rivers, to the birds and see how they would react to the music. There are times I feel horrible or have a headache or something and something hurts in my body and I would say I know music can heal me and start playing my guitar and jamming. About 30 minutes later I’m done and there’s no pain. I’ve done it many times. It’s like a power that’s not yours to give, it’s just there. I can’t grab it. If you tap into it it’s right there and will heal you if you want. You connect with yourself and remember the human that you are.

A.G: I think they do so through the church. A lot of immigrants only see it as a church thing. It is restricted and does not go outside the church. A lot of African people I know love to play music, but they have no conscience that they can make money and do it for a living.

A Conversation with Linqua FranqaAugust 11, 2022
Portrait of an Artist (in Documentary Form)August 25, 2022
More Content
The Super 8 Years
Wednesday, December 28 2022