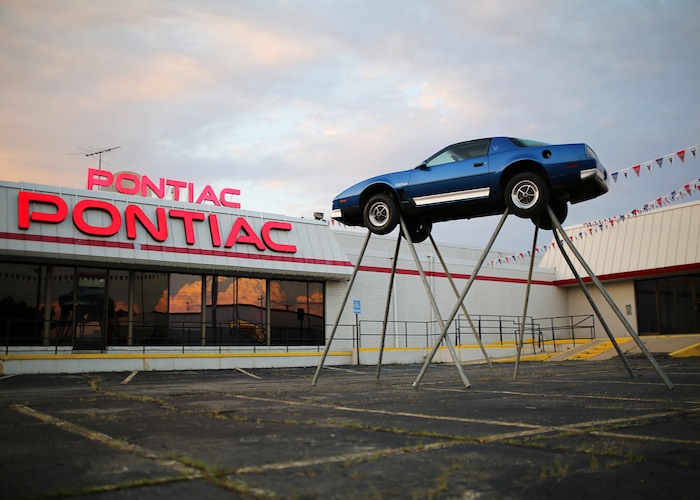 An Interview With Artist Jesse Sugarmann 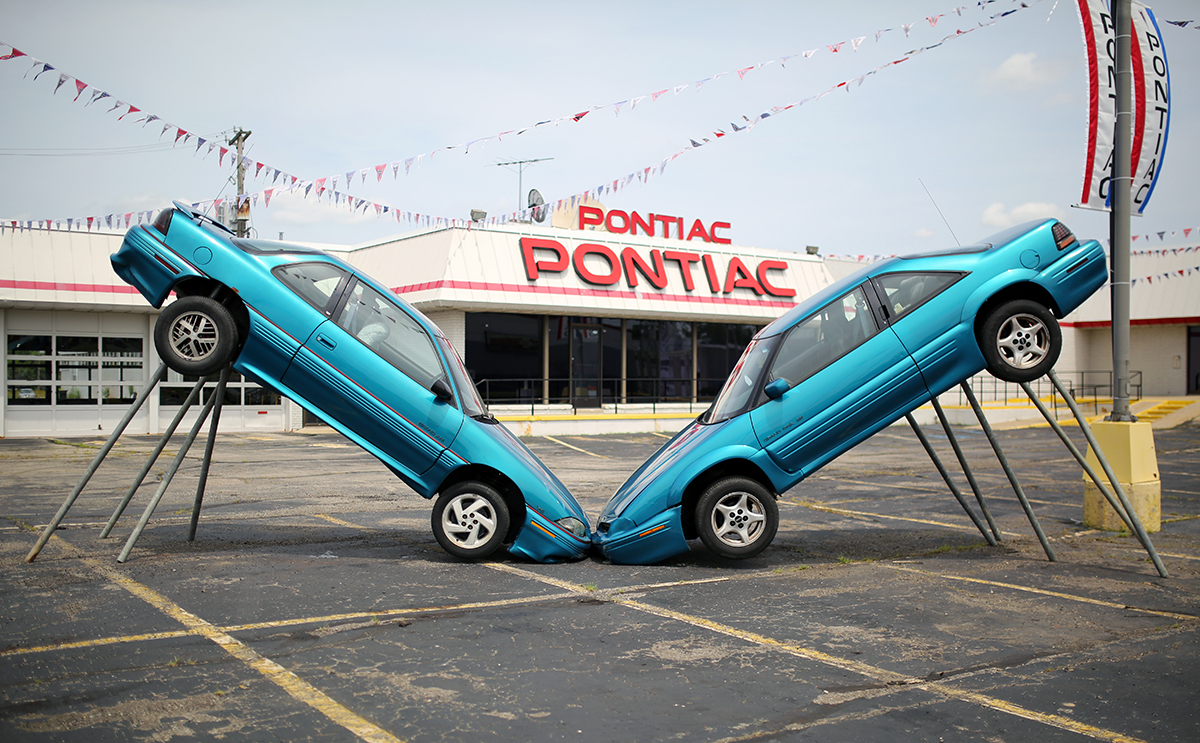 Here in the office, we’re enjoying a new soundtrack: Jesse Sugarmann‘s video installation, We Build Excitement, opens tonight! He talked to us about Pontiac’s adolescent design sense, the response he hopes to trigger with the show, and more. Hear more from Jesse at his free artist talk on October 4th.
What do you think the demise of the Pontiac brand says about U.S. culture?
Pontiac was discontinued because it wasn’t a viable company for the global market. Pontiac’s design tendencies were always marked by a sense of American machismo; the cars they created were visually loud and aesthetically lunging, as if their design team was crafting cars for 12-year-old boys. And this adolescent look felt provincial to the global eye, causing Pontiac to fail as a global entity. So Pontiac could really only exist as a house brand, an American company making cars specifically for Americans.  And this was a bad model for a contemporary car company, a failing model, but it was also sort of fantastic while it lasted. The end of Pontiac shows that the American auto industry has grown up a little bit, exited its adolescence, but in that same transition the industry has also lost a unique identity. We, as a culture, have outgrown the adolescent fantasy of Pontiac. Or at least we’ve grown up enough to accept that we can’t afford it in a global economy.

Is there a particular emotional response you’re hoping to trigger with this work?  Does humor play a role?
We Build Excitement serves as a monument to Pontiac. And I want people to engage the work with the same clipped emotion and solemn energy that they would bring to a monument. Certainly, there is a silliness to the project. Cars are falling over and people are flailing about or pantomiming odd movements.  But my intent is for these silly parts make up a serious whole. Through the synthesis of these silly components, the process of visual integration I am hoping to solicit from the viewer, a goal of solemn realization is reached, an internal edifice of monument is constructed. We Build Excitement is a serious monument to a failed industry and a lost way of life that is built of slapstick and absurdity.

Pop culture often situates cars in a position representing status or power – Jeeps crashing through mud, car chases in movies, and so on. Are you attempting to comment on this at all in your work?
The status offered by an automobile is much less real than the power offered by an automobile. Jeeps in mud, car chases  –  these sorts of power are very real. They are defined and quantified, rated on a dynamometer as a relationship of horsepower and torque. These are the concrete numeric descriptors that outline what a vehicle is capable as a tool. Status, meanwhile, is a softer set of meanings. The perceived status attached to a vehicle is related to physical power, yes, but also pushes beyond the logic of measured power to illogical aesthetic interpretations of self. Cars are objects that offer the consumer a fantastic corporal reflection. They portray an overly idealized self, offer the consumer a totem of a fantasy self. And that is the part I am most interested in, the way in which cars represents us, exist as vessels of identity.

When and where do you like to make art?
I’ve been working in the Mojave Desert lately. I live in Bakersfield, California, so getting out to the desert is pretty convenient for me. I like it out there – particularly during sunrise.

What’s your next project?
I’ll be travelling around with different iterations of We Build Excitement for the next year or so, ranging from video screenings to full blown dealership openings. I do something new with We Build Excitement every time I show it, so the project has been an abundant source of new trajectories for me. While installing at SPACE I’ve been working with Rachel Boggia and the Bates Dance department, experimenting with reinterpretations of the movements found in We Build Excitement through dance. Working with dancers has been an invigorating process for me, very exciting and revealing. Beyond We Build Excitement, I’ve begun a new body of work for my next gallery show (at Fourteen30 Contemporary in Portland, OR). I’m looking at the relationship between land art installations and automotive testing facilities in the American west. I’ll be working on some land art pieces that are also automotive testing facilities, and vice versa.