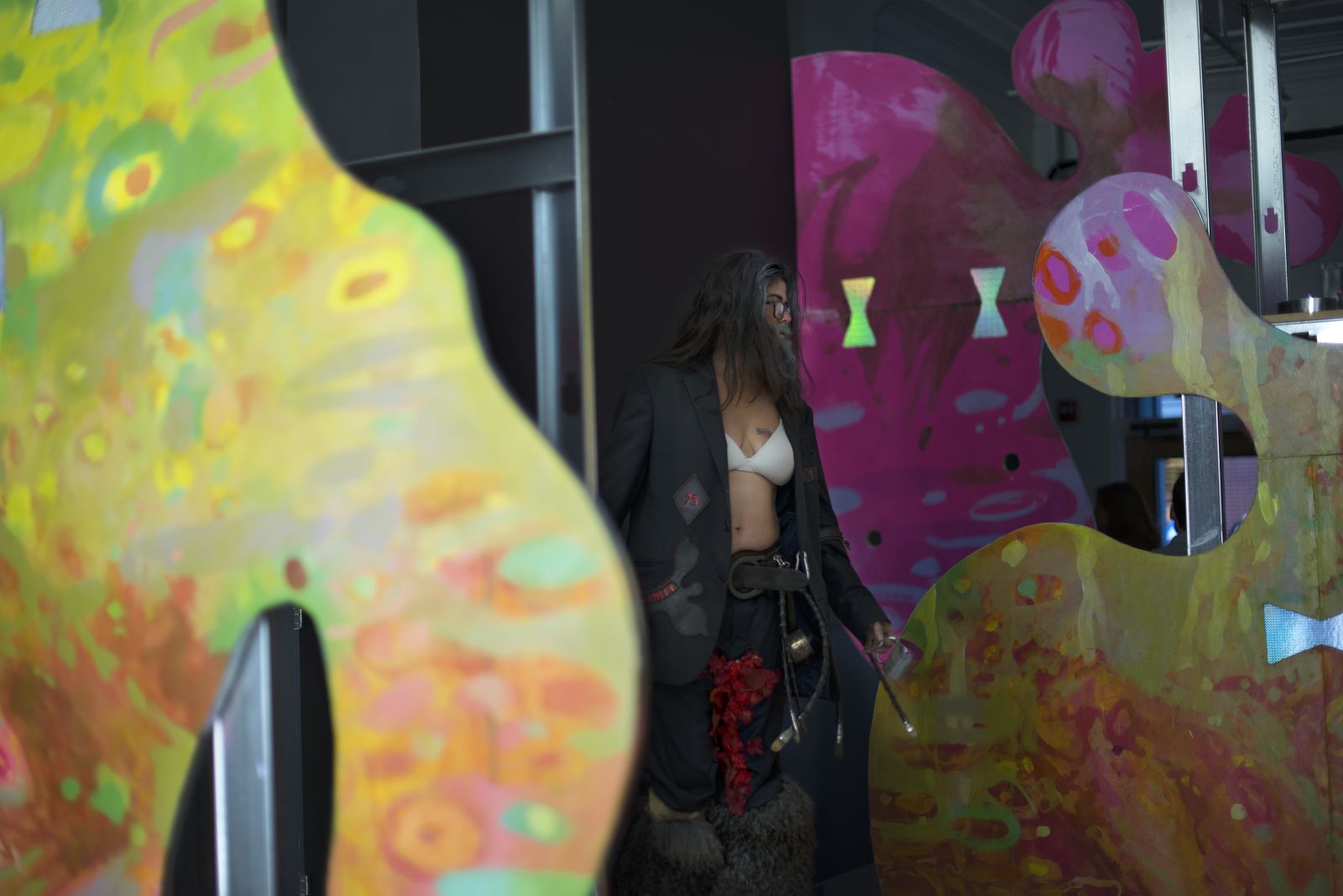 An Interview with Greta Bank

We talked to Maine artist Greta Bank about her ambitious, site-specific installation, NSFW, on view in the annex through 10/25. 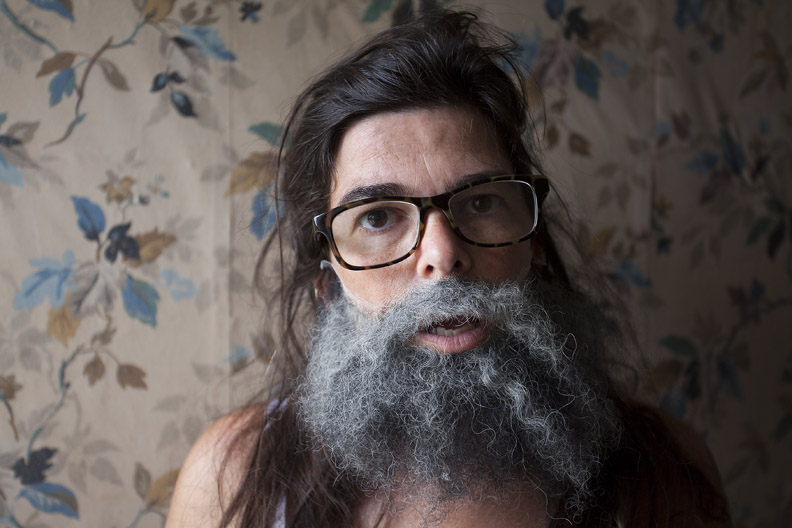 Imagine if August Renoir and Valerie Solanas had a baby…Maine artist Greta Bank’s new project allows one to pursue this fantasy while weaving an epic narrative about the confused agency of women. By transforming the annex into an Impressionist garden featuring large oil painted figures, an odd assortment of raw building materials, and a giant wall of diffused light, Bank questions the authorship of female nature. How does one portray the true female experience within a patriarchal system, when the pursuit of authenticity is wrought with corruption?

For six weeks the viewer is invited to wander the room-sized diorama to witness the development of painted forms, while at times visited by Gustave Menet, a genderfucked French Impressionist who walks on stilts and wields handmade brushes. Bank’s inquiry into the binary constructs of gender, taboos of female biology, male discourse in traditional painting, the absence of legend in contemporary society, bowerbirds, and human design as an imposed environment for natural order will be worked out through this ambitious installation and performance.

Can you describe the original impetus for this installation?

Years ago I decided I would develop a project about menstruation. It’s a huge mysterious part of my life; it baffles and consumes me, yet it’s pretty much invisible in our world. I knew what a disaster I was committing to as an art product, which is exactly why I figured it was time to seek it out. It’s taboo and it begs to be done badly—there’s so little foundation.
What does NSFW stand for and why did you choose that title?

NSFW is the Internet acronym for “Not Safe For Work.” It’s a quick way of letting people know that links, articles and images have content that they shouldn’t be looking at in a public environment. It’s a very candid code with which we program our gaze. My NSFW makes reference to my bloody costume and also the naked bodies in the paintings, but there are denser layers about our patriarchal system. So much of this project is an analysis of women in artwork, of how we have been filtered.
Why does the installation feature a recording of bird sounds?

That’s a recording provided by the Macaulay Library at the Cornell Lab of Ornithology. Specifically, it’s a Macgregor’s Bowerbird recorded in Papua New Guinea in 1974. Male Bowerbirds are especially known for curating collected objects—they create ambitious and relatively massive installations and sculptures with very specific colors and forms—in competition with each other to attract a female mate. I completely admire these rituals as examples of natural order; they use their creative technique to master their sex. There’s a Blue Satin Bowerbird that loves to collect blue objects. Nowadays that involves a lot of plastics and man-made stuff. I love the idea of collecting discarded and invisible detritus, like beach trash, and giving it value.
Why did you add a performative element (painting as Gustave Menet)?

About a year ago while prepping for the show, I had a revelation: I was never going to find my own signature painting these women. Painting is known as The Big Lie—it’s just layers of illusions—but I’ve been percolating a long time and had my heart set on making some truthful work about female flesh. There was just too much interference from the history of paint; I couldn’t get past the technical distractions, that essentially all my brushwork was the territory of other painters. Instead of letting that be a loss, I created a fictional patriarch named Gustave Menet who would work up these paintings. That was the smartest tactic to ownership, by saying ‘”look, I get that I’m a woman who is painting from the hands of men, who painted women.” Plus since the action of paint has more impact than the end product, there is so much change that happens…you have to kill a painting many times to get the layers right. People deserved to see process rather than watch a static picture gather dust for weeks on end. So the performative elements are narratives about how to work. There’s specific information about costume choices that I’ll explain further at my gallery talk.
Which elements specific to the SPACE annex did you consider?

There have been a few changes to my original idea, the biggest being the hallway made of steel studs. I did that because I realized the room was too wide. I needed the “theater” to feel smaller for dynamics, so I just treated the studs like a drawing and narrowed the space. I think that hallway really messes with people…I get asked a lot what’s going to happen there. People feel inclined to anticipate that it’s incomplete…it’s a curiosity.
Have you had any interesting interactions with gallery visitors while in character?

The biggest surprise is that I intentionally tried to make the costumes a little funny and self-deprecating as a way to be more accessible, but the response has been that I look scary. I guess that means my sense of humor runs a little darker than average.

Major support for NSFW comes from the Artists Resource Trust and the Andy Warhol Foundation for the Visual Arts. 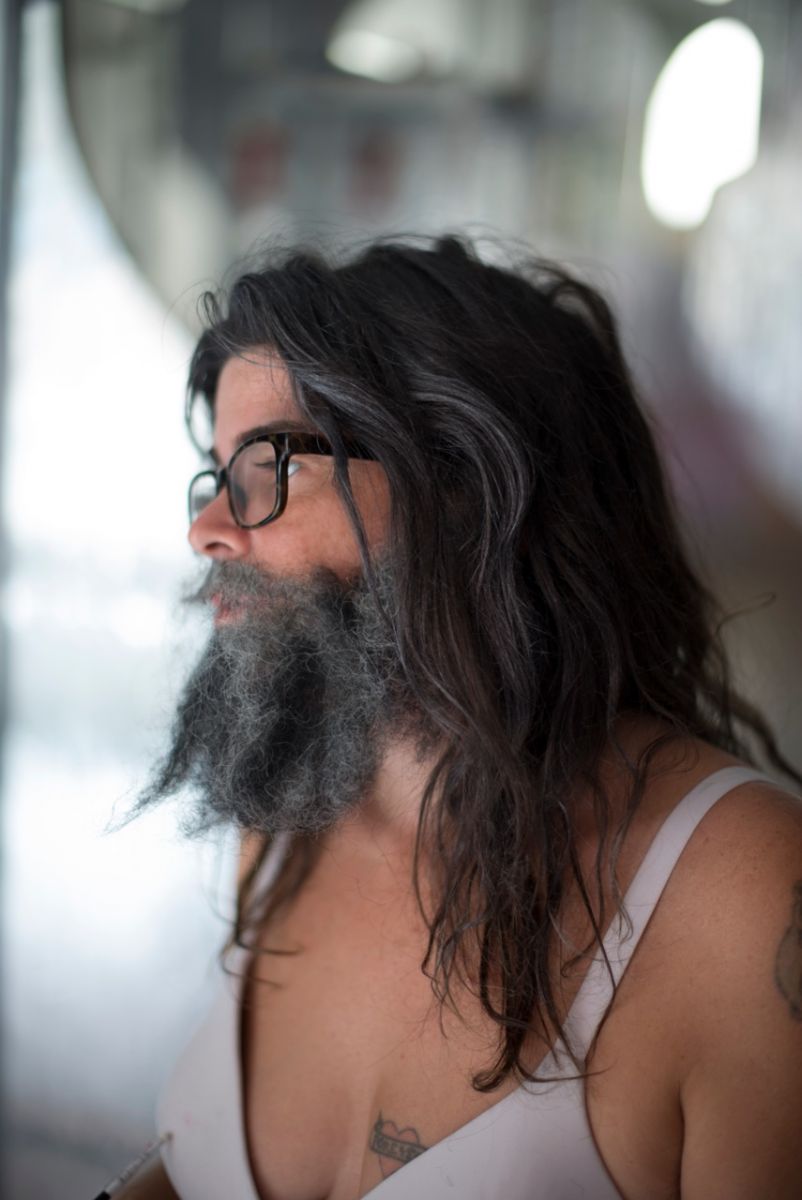 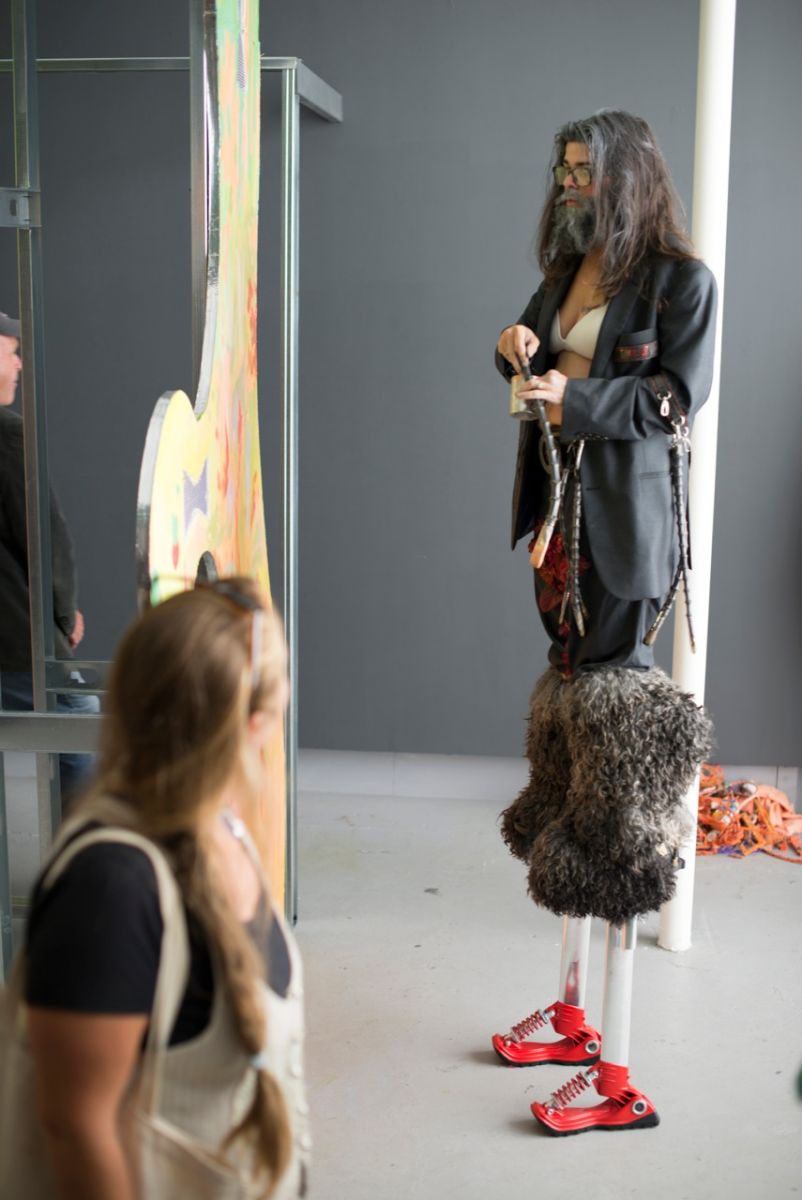 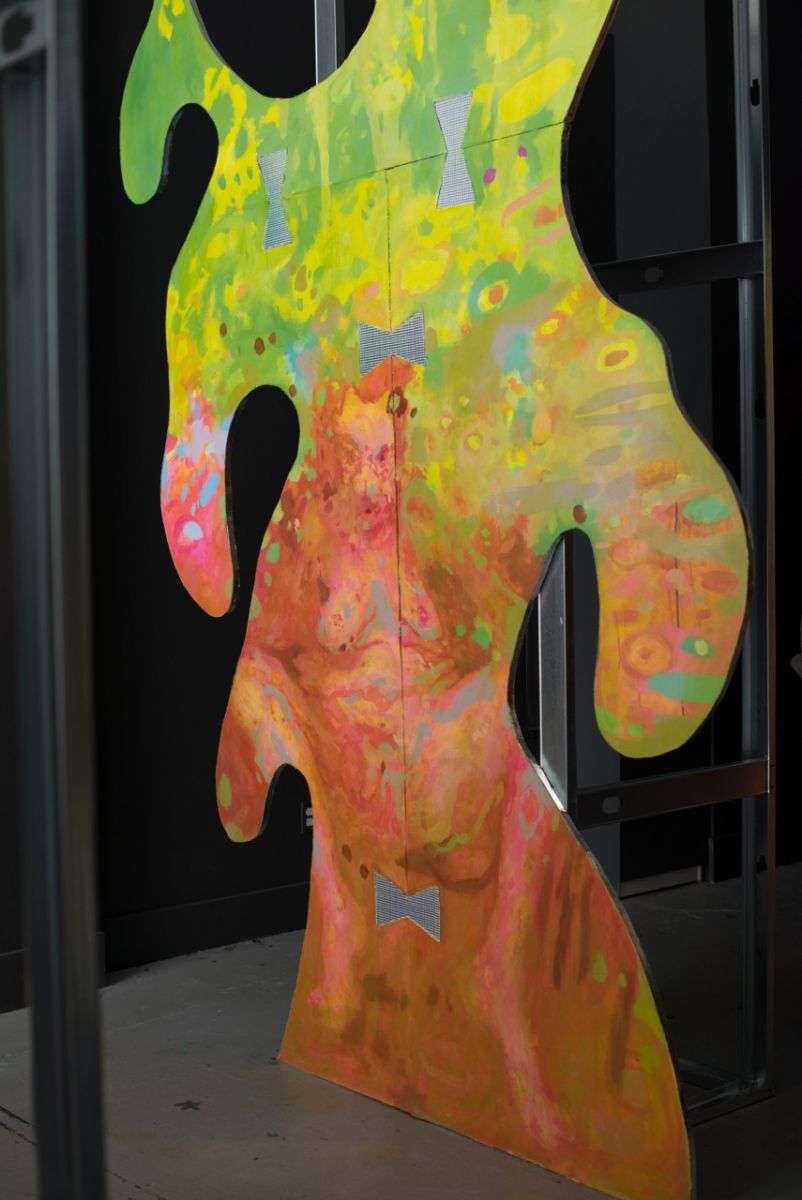 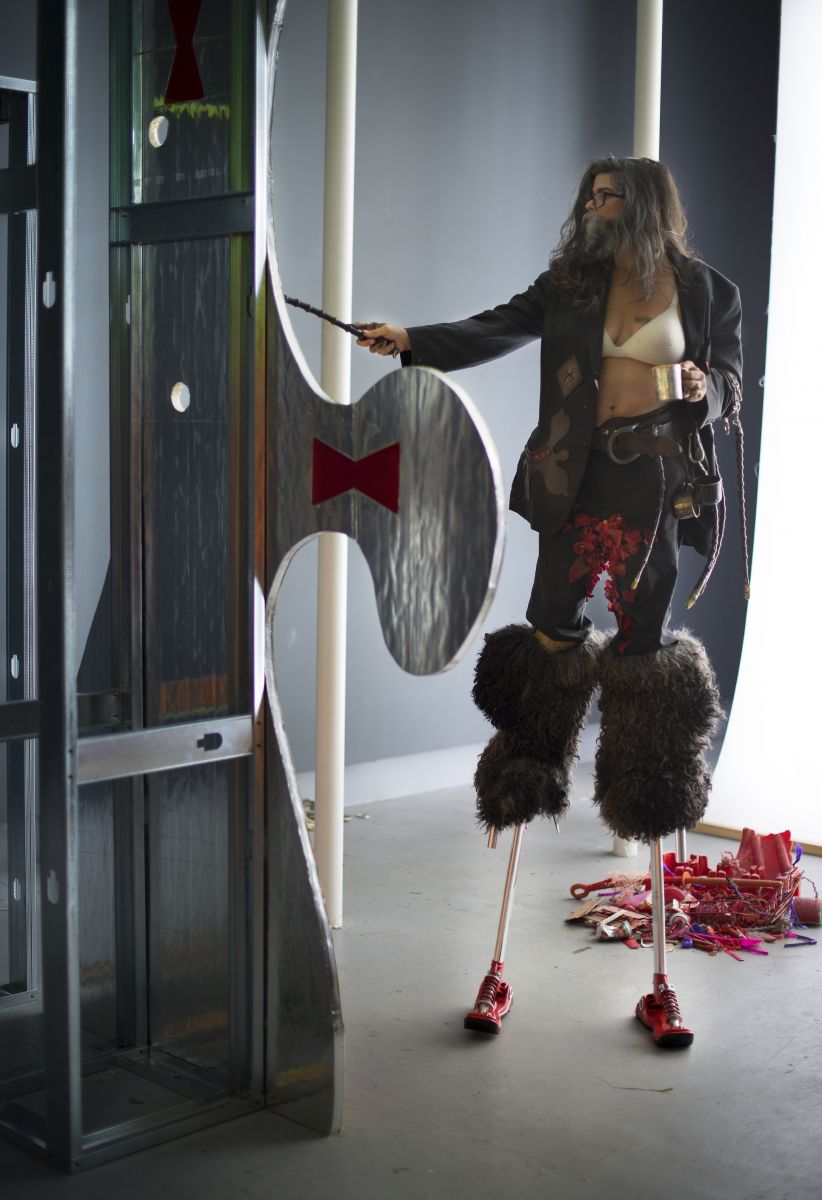