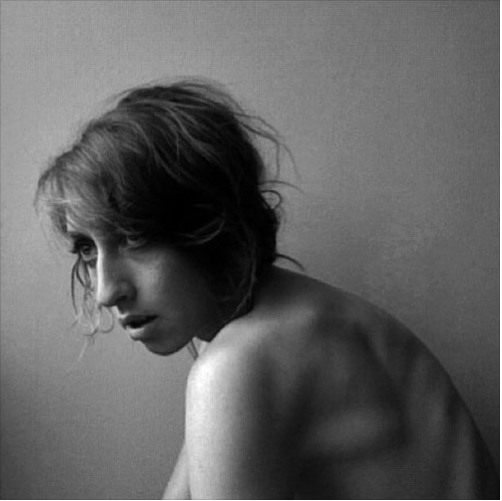 Beside Ourselves: An Interview with Kristin Hayter (aka Lingua Ignota)

editor’s note: Providence noise-balladeer Lingua Ignota (last seen at SPACE opening for the body) opens for Wolf Eyes and Wei Zhongle at SPACE on April 20. Writer/multi-disciplinary artist Claire Donato (last seen at SPACE co-organizing and reading at the Mark Baumer memorial event March Forth) will screen a video piece as part of the launch for Nat Baldwin’s The Red Barn, also at SPACE, on April 21. We love when SPACE friends & artists collide.

Earlier this week, I was walking in Manhattan when I heard a choir sing “Amazing Grace.” The song took place inside a church whose stone steps my legs ascended. I stood inside, listening.

As I listened, I thought about Lingua Ignota, the musical moniker of Kristin Hayter, a classically trained vocalist and experimental musician currently living in Providence, RI. Lingua Ignota’s first EP, Let the Evil of His Own Lips Cover Him, was released on Valentine’s Day. Kristin is a survivor of domestic violence, and 100% of her artist proceeds benefit the National Network to End Domestic Violence. Her music explores the abusers that dwell inside our bodies like cancer, how we embody them in order to exorcise them, how their language is equivalent to their physical violence. “Inspired by vernacular extreme forms such as black metal, power electronics, and harsh noise as well as sacred […] music” (per her website), Lingua Ignota (Latin for unknown language) pays homage to a liturgical tradition and perhaps does not transmute pain so much as it gives pain space to asphyxiate.

I have no sympathy for self-destructive behavior, a man once told me. Later, I read an essay by feminist author Laurie Penny, who describes women’s self-destructive behaviors as ritualistic practices embodying silent rhetorics of female pain. She writes: “Eating disorders and self-harm, bingeing and purging and starving and cutting and burning, it all becomes a silent rhetoric of female distress. If you didn’t grow up doing it yourself, you almost certainly knew someone who did. We experience this trauma on our bodies. It is a physical thing. It fucking hurts.” Kristin’s music does not shy away from self-destruction; her performances are unapologetically intense, even harrowing.

On February 26th, I saw her perform at Saint Vitus Bar in Brooklyn. That night, I took a photograph of Kristin. She is standing in front of her keyboard (painted ghost white), her body bathed in emerald green light. On her laptop is a sticker: BELIEVE SURVIVORS. She is screaming into a microphone like a demon, from the Greek daimōn, meaning ‘deity, genius.’ This power, rage, and spirit animate Hayter’s performances, and her meticulous, ambitious recordings capture (without containing) that genius, in the mythological sense of a guardian spirit but also “a person [who exerts] a powerful influence over another for good or evil.”

In church, I considered stained glass and thought of parochial school. My reverie rendered the glass symbolic. I walked from one side of the church to the other. Aware of my ritualistic performance, I stood in front of five rows of candles and lit a burnt match with one candle’s flame. An acupuncturist touched my spine and said “your body is protecting itself.” I lit another candle. I acknowledged the presence of pain, felt substantiated. Was god moving through me? The choir stopped singing.

Earlier this week, I spoke with Kristin about “Amazing Grace,” the first song she performed publicly in a Catholic church at the age of nine. Her rendition caused churchgoers to cry, which made Kristin feel like a demon who had done them harm. For this interview, I continued my conversation with Kristin via email. We discussed the space between DIY and academia, performance as a form of exorcism, the Catholic church, and the refusal to obfuscate one’s pain.

Tell me about your musical moniker, Lingua Ignota.

Lingua Ignota translates to “unconstructed language” or “unknown language.” Lingua Ignota was the sacred language of medieval visionary Hildegard of Bingen, who apparently devised it through divine inspiration. For me, Lingua Ignota means language unspeakable, ineffable ecstatic suffering, the conduit to godliness glistening with retching and spit.

What should people expect from one of your shows?
My least favorite feeling is watching a performer who is false and trying to manipulate their audience into believing something illusory. I hate flexing. Performing is a display but you can choose to display something real. People can tell when you’re faking. I try perform horror and to be pure of intent, and I am sometimes very viscerally, physically aggressive but not if it feels dishonest for that particular show; sometimes the quietest moment is the most grotesque. Generally there’s a very schizophrenic quality to my performances and I’ve been told the effect is very intense and destabilizing but I can never tell because I feel mostly absent from my body during a set.  A really common sentiment that people share with me after I play is that they felt like they couldn’t breathe, which maybe means that I’m doing something right because that is exactly how I felt for many years.

In a conversation we had last weekend, you described your performances as a form of exorcism. Can you talk more about this? Who or what is being exorcised? Is this mode of performance difficult for you?
I am a survivor of domestic violence, and for almost five years I had to become a person not myself to survive. He demanded something blank and malleable, or else I was punished. He terrified me. I existed in a state of almost unbearable anxiety. I was *beside myself* and I maybe still am.

I feel like my gut and throat and tongue are coated and sharp and I have to wrench shards of something sparkling and gross out of myself, and this is what I perform. It is exhausting. Afterwards I feel empty and sick. In my work, I embody both the recipient of violence and the perpetrator of violence. There’s ambivalence and ambiguity. I move in and out of different personas, sometimes within the short span of a phrase, and I intentionally situate the music in keys that are awkward for my voice so that I have to jump between my head and chest registers, climb up and down octaves, move between colors and textures, between screaming and singing. The melodies are generally straightforward but the sharp juxtapositions are intentionally difficult for me so there are imperfections and uglinesses which feel unpredictable and jarring and which help to establish that I am not totally in control.

Speaking of exorcism, how is your music (and your performances of it) linked to your experiences growing up around the Catholic church?
More than any other genre, the sound world of my work is most directly inspired by liturgical and sacred music—anything from the organum of Perotin to baroque masses to Appalachian hymns to Pentecostal glossolalia. I was born with The Guilt, was raised Catholic, and attended parochial school. My childhood largely revolved around the church and its code of uniformity and morality. In my teens, I turned to atheism, but I’ve always had this deep affinity for the rituals and theatricality of Catholicism — fascinating and quite beautiful. I now attend mass regularly because I find the symbolic language so compelling but also because I do believe in salvation through suffering. god is a place to put your pain.

You attended the MFA Literary Arts Program at Brown University in Providence, RI. How did this experience influence your musical practice?
I’ve always been caught in a weird interstitial place between academic and DIY. Almost all of the work I perform comes from my graduate thesis BURN EVERYTHING TRUST NO ONE KILL YOURSELF, the foundation of which is a 10,000 page document of algorithmically-manipulated language appropriated from the culture surrounding extreme music, focusing particularly on extreme music that espouses misogyny. This 10,000 page text is arranged to reformulate Stravinsky’s Rite of Spring from the perspective of the girl who dances herself to death, The Chosen One. Among other things, it’s a meditation on different strata of ritualized violence. During my time at Brown, I was also exposed to the really rich community of experimental music in Providence, which is kind of unlike anywhere else, and this inspired me to abandon academic tenets, to stop obfuscating painful, personal material with technology and critical theory, and to make work that is instead raw and content-focused.

What have you been listening to this week?
A recording of selected chansons by medieval French composer Gilles Binchois performed by an ambiguously-gendered voice. Dark, fluid music that sounds like it comes from nowhere.

I am also listening to black metal, but I am hesitant to talk about black metal in the year 2017.

What are you currently reading?
Burial by Claire Donato, an ode to mourning which opens slowly like a slick black glistening tomb. You did good, Claire. John Foxe’s Book of Martyrs and the King James Bible, for research.

You just released an amazing EP called Let the Evil of His Own Lips Cover Him. What are you working on next?
I’m finishing recording a bunch of other tracks in a shed in the woods where I live in Rhode Island. Working on a self-released physical object for LET THE EVIL…, working on some collabs, and designing ‘merch’ for my upcoming west coast tour with The Body and Muslin.