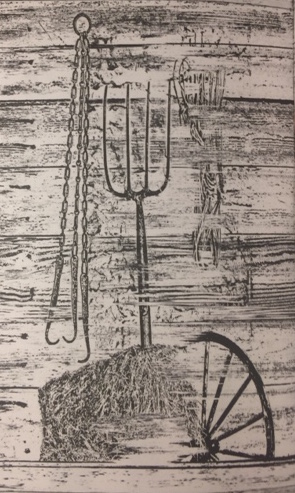 The Bruises Are Beautiful: An Interview with Nat Baldwin

editor’s note: Nat Baldwin will be here this Friday, April 21st to celebrate the release of his first book of short stories, The Red Barn, via Calamari Press. The ‘multi-modal’ performance will include video works by Mark Baumer, Claire Donato, Annie Bielski, performances by Kafari, Lisa/Liza, Lauren Tosswill, Rare Storms, and of course, Nat himself. Print bookstoore will be selling books with proceeds going to 350 Maine and ILAP. Hannah Perry is a Portland-based writer, Programs Coordinator at Maine Writers & Publishers Alliance, and a distinguished former SPACE Gallery intern.

The Red Barn, Nat Baldwin’s first book, is a hypnotic collection of very-short stories that take place in a disorienting nightmare world, in which, among other things, a group of young boys believes that the sadistic “Father” who has kidnapped and abused them is their savior, and the dead are mined for their teeth. The rhythms of the language are just as compelling as the stories themselves, and they propel you deeper into this brutal world even as you might wish to look away. On the surface, it’s a quick, conversational read, full of simple nouns like mouth, wire, dirt, skin. The stories are vividly alive even as death hovers on almost every page, and they don’t end so much as dissolve or morph into hallucinations. There are many ways to interpret what happens in The Red Barn, or you could simply enjoy it for its poetic approach to horror. Either way, it has the kind of distinctive vision that colors your perception long after it’s over.

Nat was kind enough to take some time to answer a few questions by email in advance of The Red Barn’s release event this Friday at SPACE.

What ideas or influences (or real events) played a part in writing The Red Barn?
I was mostly thinking about simple ideas like perception, dissociation, fear, memory, time. For the most part, the book is not based on real events, or anything I’ve experienced, luckily. Although, there is one story where the narrator breaks into a school. I broke into a school once, so it’s kinda based on that I guess. That story, like all the stories, has more to do with how the story is told, than what is happening in the telling. Also, the house I grew up in, until I was 12, had a big red barn. It was my favorite place. There was a basketball hoop attached to it. I shot thousands and thousands and thousands and thousands of shots there. I shoveled the driveway in the winter to shoot. That red barn (and my old house) has been long destroyed.

What was it like to write? Have the characters stayed with you afterwards?
It was intense and tedious. I write very slow. Word. By. Word. I obsess over sounds. It was also very fun to write. Exhilarating! After putting in an eight-hour session and then finally getting something right – there’s really not a feeling like it. If I could describe it, then it wouldn’t be so great. But that doesn’t happen often. I suppose that’s why when it does, it’s hard to articulate the feeling. The characters have not visited me lately, as far as I am aware. Sometimes I think of them all as the same character simply embodying various shapes, ages, genders, etc. They are lost and looking for the same thing, although I’m not exactly sure what that thing is. I think of the act of writing as akin to being joyously beaten. We may come out bruised, but the bruises are beautiful.

Tell me about the images and artwork throughout the book. A lot of them are quite ordinary images of barns and tools that get a dark cast in conversation with the stories.
Derek White made the images. He is the publisher of Calamari Archive. I don’t know where he found the material. I like how he did a very straight up representations of tools, barn things, etc, through most of it. Most of the book is just that—hammer, nail, hay, tooth, dirt, rock—concrete nouns that exist as they are. I think the simplicity on the surface creates a disorienting tension (I hope!).

There are a lot of visceral images of bodies decaying, burning alive, etc throughout the book. Were those purely imagined?
I read stuff about farms online. I don’t know anything about farms or tools or barns or barnyard animals. I read about horses dying in their stalls. I read about the then-dead horses being unable to fit their big bodies through the stalls. I read about pulleys and ropes. Chainsaws and tarps. I read some insane comments sections from farmers on farm websites. I love animals so much. I don’t think they should be confined or chopped up or commodified or chewed. Creating discomfort in art is compelling to me. I’m not interested in reading or writing something I can “relate” to, under most circumstances.

The stories are often surreal and nightmarish – people are brutally murdered and then alive again on the next page, dead kids watch their own decomposed bodies, etc.  I sometimes felt like I was reading a series of prose poems more than a series of stories. But the book also feels in some ways like a conversation, with really simple language, and I admired the hyper-realness of the animal slaughter and the hay making. Being grounded in reality makes the surreal stuff even more gut punching. Do you think of the book as prose or poetry or both? Does it matter? Were the rhythms of the sentences more important to you than their meanings?
Creating a tension between the real and the surreal is important. The idea I think is that it is not one or the other. Or it is one or the other, but we are not sure which. Maybe it is neither real nor surreal. Maybe it’s something else. I hope something else. I guess that’s the way I think of prose versus poetry, too. I mean, I would categorize the work as prose, but it certainly emphasizes the sonic qualities of language akin to some poetry. Then again, I don’t read prose that I don’t think of as poetic. I think the characters seemingly weaving in and out has to do with shifts in perspective and point of view. Some sections will appear as memories or hallucinations, without any indication other than the content itself. But of course the content doesn’t exactly spell it out, adding to the disorientation and confusion. It doesn’t say: “and now for the hallucination!” But the characters are confused, too. It’s a confusing world that we call our “reality,” and I love the fact that fiction can affirm our confusion, as opposed to alleviate it. The whole book is just one long (or very short) hallucination. I think fiction is supposed to remind us that maybe it’s ok if nothing in this fucked up world actually makes sense.

The overall atmosphere created by the book reminded me a little of Michael Haneke’s movie Funny Games, where the narrative invents ways that defy logic to trap the characters in torment even when they seem to have escaped, and evil pretty much overwhelms everything else. There’s even a weird horror to the story of the 10 year old boys hanging out (bones, fat, bodies as objects more than humans, graves). Does that reflect anything about the way you relate to the world outside of fiction?
I haven’t seen Funny Games but I want to. I almost watched it many times but the person next to me said it was too insane. I will watch it soon. I’m not totally sure how to answer the question in terms of my world view. Hmmm…the world is a terrible place. There is violence everywhere. There are people complicit in that violence by not giving a fuck. Capitalism is violence. We live in a country built on white supremacy. Slavery still exists. And no matter how “great” some of our lives may be, we are still destroying the earth just by being alive. Climate change is violence. The animal agriculture industry is violence. I think part of the reason I’m interested in violence in my own work is that people are often afraid to see the violence that surrounds us in real life. Or, when they do, it’s a spectacle, entertainment. In a book or film, we cannot look away. We are forced to feel. And as horrible as us humans are, the fact that we can make art at all is beautiful. The fact that we can connect with each other is beautiful. James Baldwin, Toni Morrison, Clarice Lispector, Larry Bird, my Gramma Norma – all humans. What I mean is: life is amazing. Well, it’s a lot of things, but we have no choice but to live. So the idea of a “world view” as seen through the work is complicated. I love how words and books allow us to enter an alternate reality in order to feel more alive within our own.

Do you like horror? Which film/book do you go back to most often if so?
I want to like horror. I rarely have time to watch movies. That sounds absurd, but my schedule is truly absurd. I don’t do a lot of things I would like to do. I had so many movies cued up on Hulu, and then they all disappeared or Hulu changed into another company or something. The closest thing to horror that I watched recently (within the last year) was Eyes Without a Face, by Georges Franju (who also did Blood of the Beasts, which we will see at the book release). I think the closest thing to horror in fiction that I return to is Brian Evenson. His work is more psychologically horrific than straight up gore, although there is still plenty of blood. I don’t reread books much but always want to. It’s tough when you have a book-buying addiction and have whole shelves that have gone unread. I guess the fact that there are more amazing books than time to read them is another good reason to be alive.