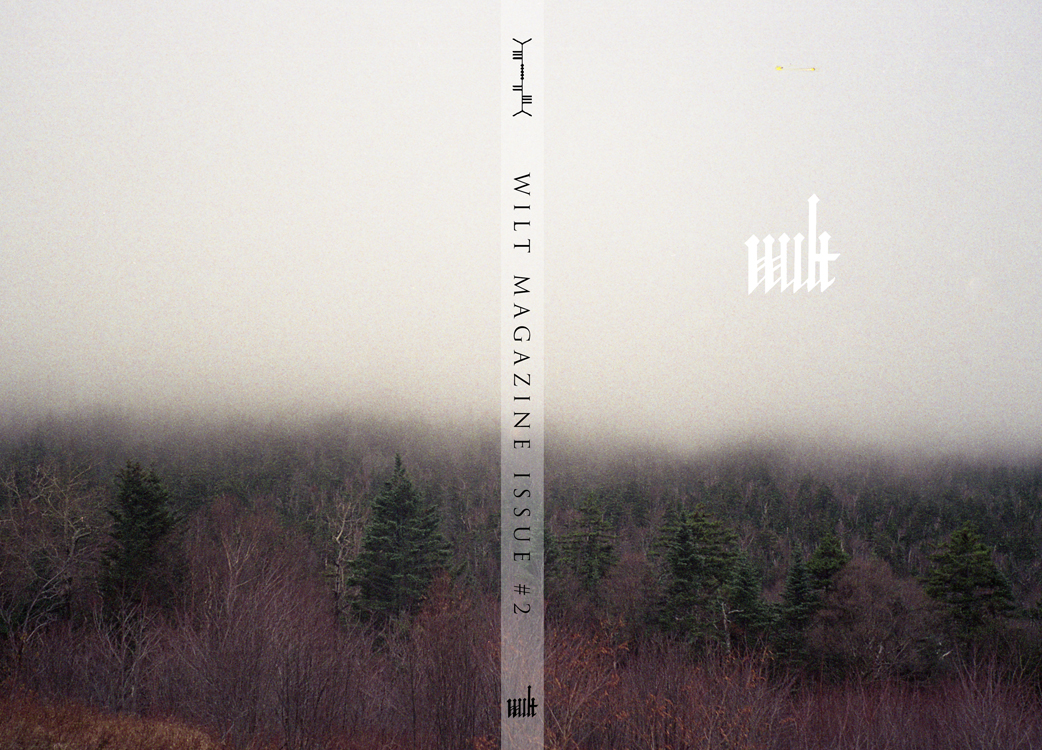 When we meet for coffee, Dylan Hausthor takes a moment to refocus his attention. The young artist has been working all day on a documentary project with his mentor and former professor, John Fireman of MECA. But as the co-founder of Wilt Press, an experimental studio that produces and prints gritty, witty, and often beautiful material sourced from local and international artists, Hausthor is used to this kind of rapid gear shifting. In his creative life, he moves daily between the related yet distinct realms of creating images, editing submissions, and producing a print magazine. He’s become skilled at separating the wheat from the chaff, both in his own work and in work produced by his fellow artists.

But we’re meeting to talk about Wilt Magazine, which is perhaps his most involved work to date. The first issue is a luscious yet slightly discomforting compendium of diverse works by various artists, which Hausthor (and his collaborator, photographer P. Guilmoth) created with help from a Kickstarter campaign in 2016. The second issue, which has been recently released (and produced in part with a grant from SPACE’s Kindling Fund), follows in a similar vein and features pieces of photography, painting, digitally manipulated images, and literature. He drops a copy on the table, and as we sip strong cups of dark coffee, Hausthor reveals, in bits and pieces, how this singular publication came to be, and where Wilt Magazine is headed next.

The first one included a lot of my friends. For the second one, we asked people we didn’t think would work well together. We gave ourselves the challenge of trying to make sense of very different types of work. For this issue, we decided to leave all the projects sent to us untouched. We published them without making any changes to the images or any edits to the writing. We treated it like a pile of zines. It was our responsibility to make sense of them with design and sequence.

Lotte Reimann makes these amazing photographs. She also submitted a piece of writing. We left in her typos, and her weird layout. At first, we changed it, and she didn’t like it. She wanted it to be treated like a photograph. That made us step back and think, ‘Why would we ever change her work?’ We decided to publish it exactly as she sent it in. Lotte also makes these silky, beautiful images. When it comes to the quality of the images, they’re totally about beauty, which is weird because they are wrong yet really pretty. They tell a story that is fluid and semi-narratives, but made up of scenes rather than plot.

The next few pieces are your work. Can you tell me about that sequence of photographs?

“Loony” seemed like the perfect piece to come next. Paul and I worked on this together, and we’ve been collaborating for six years, so it’s kind of second nature for us. We had the title for this piece, “Loony of the Woods,” before we came up with anything else. My collaborator, Paul, came up with it. We decided to feature a lot of ambient imagery and a lot of dead things.

Has it changed aesthetically?

Instead of using a lot of noise, which is something we thought was so beautiful once upon a time, we dropped that and began to focus on a different design, which is more considered.

As editors and creators, what is your aesthetic?

My aesthetic and interest in work is at this weird point of being almost antiquated. It’s almost passé and almost overly contemporary. We’re—me and Paul—are inspired aesthetically by a lot of 90s work and imagery, like a lot Harmony Korine’s filmmaking style. But we’re also fascinated by this post-post-modern thing we’re in right now. And how those two couldn’t possibly intersect.

What do you think is your responsibility to the artists you are representing in your magazine? What is the relationship between the publisher and the artists?

I think that is something that evolves as we edit each issue. We don’t necessarily want to have this little influence or effect on each spread for every magazine. I think the work will dictate our need. For me, this wasn’t an art project. It’s an editing project.

Will you keep making issues indefinitely?

I don’t think there is an end point for this project. As long as we have money, we want to do it. I think Wilt Press could be sustainable, but I don’t think the magazine will ever be. We’ve played with the idea of doing pre-sales. But right now, we’re excited to do it, and to keep doing it. And that’s enough.