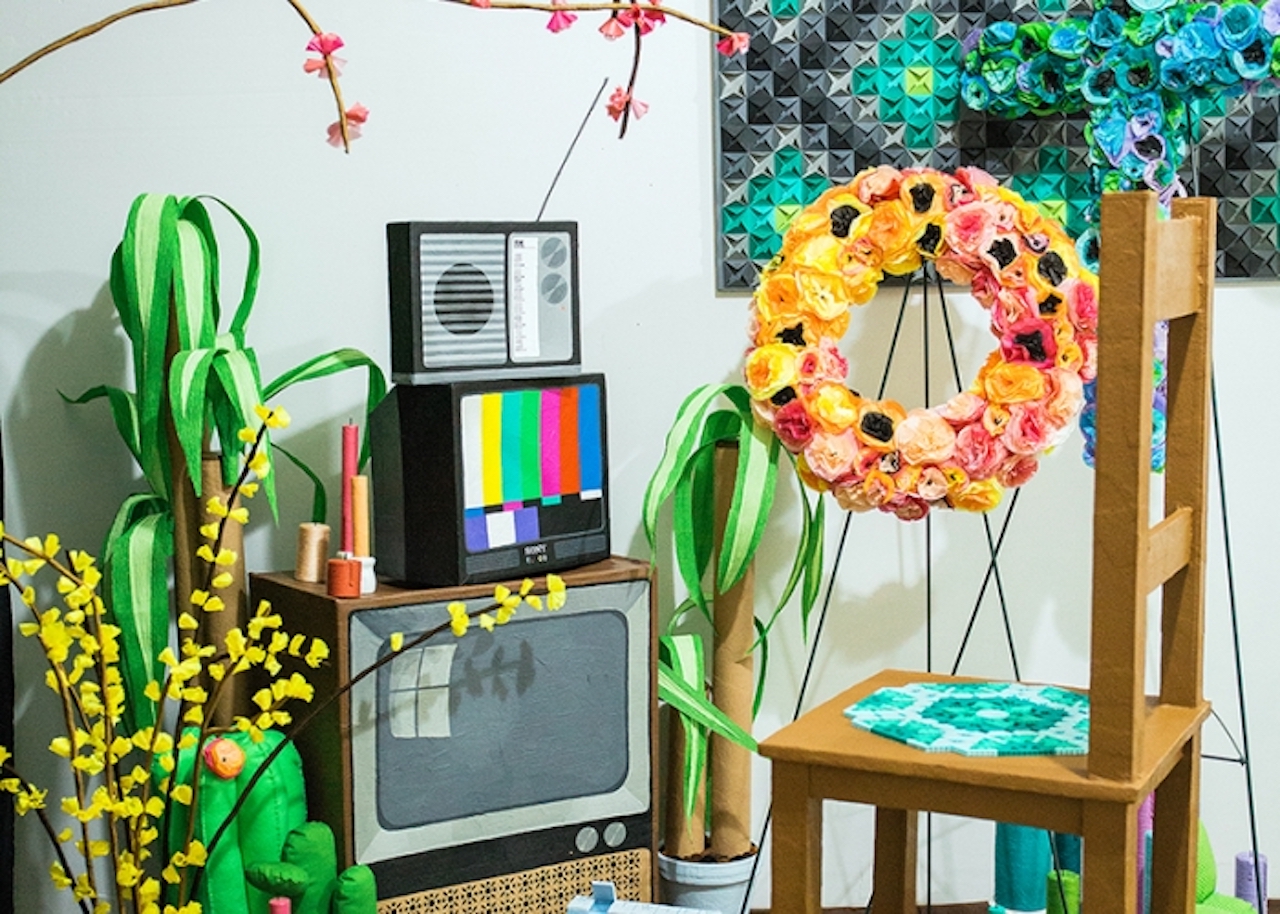 In the Waiting Room with Julie K. Gray

After a near-death experience in 2009, Julie K. Gray finds that much of her artwork addresses mortality and the psychological space of “limbo,” thematically. In order to address these intangible subjects, she has come to use symbolism, humor, kitsch, cultural signposts and varied media (primarily needlepoint, childhood craft, photography and video) to become more accessible to the audience. She strives to open a dialog about mortality and spiritual inquiry (and doubt thereof)— subjects typical deemed “taboo” in contemporary North American society. She discusses death, family, and her current installation Waiting Room, on view in the SPACE window gallery through March 13th, 2018.

The following is a transcription from an interview on February 27th, 2018 at Engine in Biddeford, Maine.

You currently have your installation Waiting Room in the window gallery at SPACE. Do you want to talk about that project?

Sure. It was really inspired by both of my grandmothers. Both of which are really, they want to be dead, already. Every time we see them they ask us, ‘god, how old am I?’ and we tell them and it’s really disappointing to them. They’re kind of in this weird psychological space right now where their heart and their spirit are on another plane with their loved ones and with their husbands who passed away, but they’re physically here and just absolutely miserable. So it was kind of a tribute to them and also talking about, in general, the psychological space of limbo.

I’ve been photographing at my Latvian grandmother’s house for years and years ever since I was an undergrad student, and a lot of the ideas of the images were taken from her home. She has a lot of plants, some of which are in multiple, varied states of life. A lot of weird tchotchkes. She’s really proud to say that she’s never purchased anything within her home, that everything’s been a gift. It’s just really talking about kitsch objects, object memory, and obviously since its titled Waiting Room and it’s kind of an homage to my grandmothers, so I have the chair, and books ’cause they, one of my grandmothers still reads a lot and that’s pretty much her only form of entertainment. And she has a lot of broken down, outdated technology in her home as well, so that’s why I took some of that imagery.

I hope it brings a smile to people’s face, really. People don’t need to know that it’s about death, and mourning, and our mortality. I just want it to be playful and remind people of their childhood and of life in general. And if they do find out that the work is about death, there’s undertones of that, then that’s great, if they can have a conversation amongst each other about death or what they think happens afterwards or whatever. I feel like it’s not really [ a ] conversation that we have here in the U.S. So, I think people should talk about death more.

The theory and practice of play as a tool, can you talk about how that manifests in your own life?

About eight years ago I had a near-death experience and it was really traumatic, and there’s not a day that still goes by where I don’t think about death, how I’m gonna die. I have a ridiculous amount of things prepared for my death, even if it’s super sudden and tragic I have people to take over, you know I have my passwords written down for all my social media accounts to be shut down immediately, and all my jobs I have scheduled for the next year I make sure that someone can allot them to another photographer. So, I’m pretty consumed by thoughts of death, so definitely the aspect of play within my work is really important. And the use of bright colors. It’s important to bring a levity to darker subject matter which I usually deal with and think about. Also, Friedrich Fröbel who created Kindergarten, he said that having children, and even adults, use simple materials and very simple tools and methods of making was really integral in how we construct who we are as a person. Why shouldn’t our artwork be serious but playful at the same time. It just makes it so much for fun coming to the studio, too. Just to kind of play with a new, weird, material that I haven’t used before. Or, to use something that I haven’t used in thirty years or twenty-five years, so that can be kind of cool. Like I’m thinking about using puff paint again, which I’m super excited about, but it’s really hard to find these days because it was big in the ’90’s, not so much now. But yeah, I just have so much fun playing with fun materials.

Do you feel like the near-death experience and your focus on death is driving your practice or the practice is driving processing that experience?

Definitely both. I never really made work about death before that experience, it wasn’t really on my mind constantly. Definitely doing research into how other cultures deal with death inspire a lot of my works and my methods. Specifically, Victorian mourning culture, memento mori, Day of the Dead, obviously, and their use of papier mache and offerings for their dead. I consider a lot of my work as offerings to people who have passed away in my life, and also offerings for those that are still alive. But definitely a lot of my work is very meditative as well, so that kind of feeds me spiritually. It definitely lightens notions of death and makes it a little bit easier for me to think about… a little less daunting.

What are your thoughts on American society and death?

We definitely don’t know how to mourn properly. People aren’t given enough time to grieve, and it should be a very personal experience, everybody is going to grieve their own way. We just don’t allow ourselves and other people the proper time or space or whatever anybody needs. Places like New Orleans, there’s some cemeteries where— I mean most of the cemeteries are above ground in tombs because of the high water content— there are some cemeteries that are still underground, and because of the high water content people have to go there, loved ones, family members have to go there and literally grab shovels, go to the back of the cemetery where there’s a big dirt pile, pick up shovelfuls of dirt and keep on burying their dead. And they go there and they drink a beer, they spend a Sunday afternoon out there in the cemetery amongst their loved one that’s passed, and they kind of make it a family thing.

What is next for you creatively?

I’ve been working on a lot of— recreating a lot of objects that my grandmother has given me. So, she’s kind of— her house is really funny, it’s like a museum of really outdated things, and she just kind of curates the way things are arranged. It’s really bizarre. I’ll go there and be like ‘oh my god, where is that little California Raisin figurine from the eighties that she got out of a cereal box, it used to be on her dresser?’ and then an hour later will pass and I’ll be in my grandfather’s old office and I’ll see it in the curio cabinet or something. But every time I go see her lately, this past year pretty much, she’s actually been kind of purging some of her objects, but only to me, which is funny. None of the other family members get things pawned off on them. But, I think it’s because she just really trusts that I’ll do something with it. She loves the attention too, which is hilarious. She loves when I have like, taken photographs of her house, and if the exhibition is local, my parents and I will go pick her up and we’ll bring her to the show and she’ll just kind of sneak around, and listen to what people are saying about the images of her living room or bedroom. So, she loves the attention. But kind of to honor that, and to honor the actual objects themselves, I’m recreating those in kind of like childlike fashion, a lot of needlepoint, a lot of papier mache, even macaroni art.

Julia Whyel is a Storyteller and Media Producer in New England. Her work focuses on themes of community, addiction, and vintage fashion. She loves hammocks, wheat pennies, and debates about food, but not necessarily in that order. View her work here.