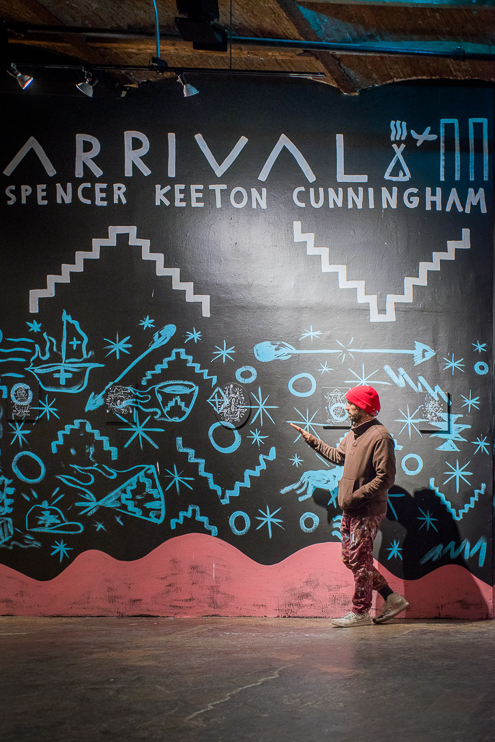 Spencer Keeton Cunningham is a contemporary artist whose work encompasses large-scale murals, film and sculpture. A member of the Colville Tribe based in Northeastern Washington, his work focuses on environmental and social issues, including Native American rights.

In conversation with Julia Whyel, Cunningham discusses his inpriration for his installation Arrival, on view in our Main Space through June 29th, 2018:

“I wanted it to feel like a universe. This idea of history being in the stars over a sacred hillside. There’s a horizon line on both sides of the wall and then there’s paintings hanging on the wall, but behind the paintings is a back drop of symbols in the sky, almost representing constellations, or a bizarre aurora borealis. The only way I can do an exhibit like this is start with everything blank, and then taking the canvasses after painting the mural on the wall, extending the lines from the mural onto the canvasses and then in a sense creating, for each individual piece, a new symbol on top, so once you hang the paintings you can’t move them because the lines connect perfectly with what’s on the wall. I spontaneously decided to add paintings into this exhibit, I was almost finished and then I decided I’ll add thirty-five small paintings in here and I did these the night before the show in a frantic frenzy of thirty-five paintings.”