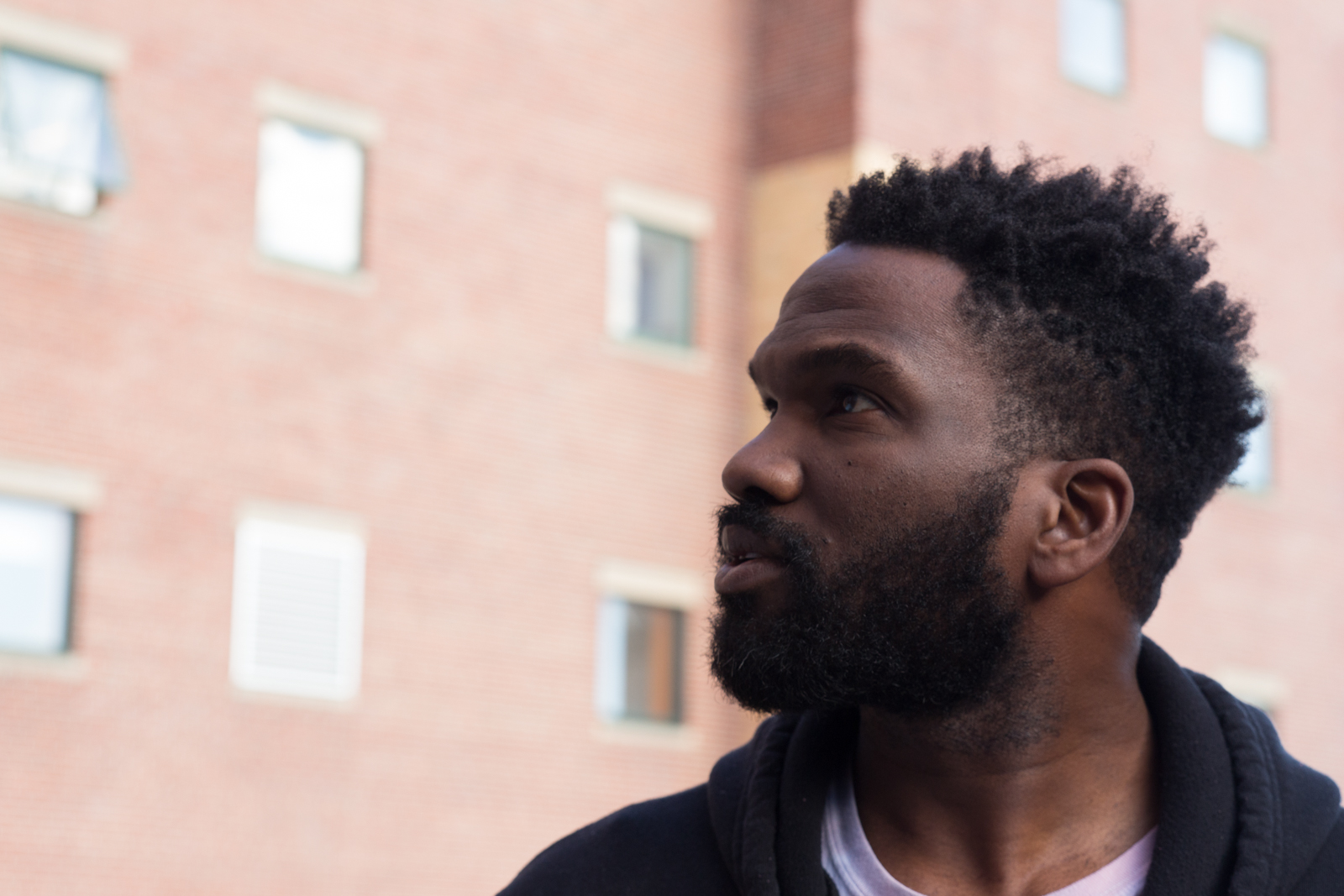 The work of Jeremy Okai Davis holds public and private personas in tension through his use of color, reference to pop culture, celebrity news, autobiography, and history. During his recent Artist-In-Residency at SPACE Gallery he discussed his history of influence and the changing experience of creating.

What is the role of an artist in society and how do you fit that role?

It’s new for me, the role that I, what I think it is now. Before I was just making art mostly for myself just cause I really like doing it, but these days I think in the last few years especially with the change in the administration, it’s important for an artist to be kind of a cypher for information and for positivity in a sense but also just getting information out. I think it’s one of the best ways to filter out information in a straightforward way and an enjoyable way also as opposed to being bombarded by media.  I went and talked to some of the students at MECA and it seemed like those students were kind of like looking for something and looking for someone even, to grasp onto. Just being a voice of reason, a voice of experience, letting people know its ok to feel a certain way, letting people know its ok to voice their concerns and displeasure. Just being an unadulterated place for people to go for, information, I keep going back to this information thing. It just seems like that’s really important, to have information that’s not jaded. And I think the artist is really important for that.

I have a catalogue that I had made and my buddy Paul is actually a poet friend of mine, wrote the essay in it and he used this quote from Kerry James Marshall that said, to be an artist, ‘if I want to be an artist too … I had to know something’ I might be messing that up a little bit. Recently that’s been a really big part of my, it’s making sure not to make work that’s just pretty, like the work needs to have a backbone. And I think that backbone is rooted in information, and trying to know something or trying to help other people know something, whatever that something may be. So that was a big one. In the article, I just read the article that that quote came from, he mentions something about, just doing the work, which is, for me has always been kind of a mantra as opposed to getting to the studio and feeling like you don’t have any ideas or you don’t know what to do, just put pencil to paper, put paint to canvas, just do the work. I take it that way but also take it, in the article I think he was saying, don’t make work just to show it, or don’t make work just to sell it. Just do the work if it’s in you, just get it out. So that’s been a really big one for me.

Can you talk about the different experience of working on small scale pieces versus a mural in a big community space?

Well I just did my first mural in Portland, Oregon and it was really difficult. Cause for me, I’m so used to, even the larger pieces that I do in my studio, I can step back from and I can get ten feet away or five feet away and it doesn’t, and it helps to get that distance. But with the mural you’re right in the middle of it, you basically have to walk across the street to see if everything looks right. That was the main difficulty, and then also just working in public spaces is different for me, I’m used to being in my studio and closing the door and people not seeing the process, and they just see the finished work hung on the wall and are amazed, by seeing how it came out. But having people see the ugly parts of creating was interesting and new for me, talking to people in the middle of it. I had to do a lot more explaining than I’m used to, other than the explaining to myself and trying to figure out things myself, people would ask like ‘why did you do that?’ or ‘how did you do that?’ and I could ignore it I guess I could put headphones on but it was actually really interesting to step outside of the studio and do that.

What are you working on right now?

Well, I’m just doing the work right now, I’m actually in between projects, I wouldn’t even say in between, I’m trying to figure out the next project. I have a lot of ideas floating around in my head and being here at SPACE and having access to Pickwick I’ve been able to use their screen-printing, so I’m trying to figure out a way to have a different ground to the canvas or to the panels before I start, so I was playing around with that idea. In Portland, Oregon where I live I got commissioned to do a large mural, so I’ve been kind of mocking up the mural. So just using this time away from my Portland and work to focus on the next step, the next thing I was gonna do. Just really trying to get ideas out.

Having that first experience of doing the public mural and having that interaction and having that, maybe, vulnerability of a work in progress that’s out there, what are your feelings about going into this next project?

The next mural project, you know this one is  a little different because it’s going to be fabricated, so I’ll be creating a large piece in my studio and then sending it off and having them fabricate it a little bit larger so I don’t have as much public interaction but, the dealing with committees and the people that granted the money, you know you kind of have to, not too much, but in a sense, kind of bend a little bit more, and do sketches and do mock-ups just so they know what they’re getting, as opposed to working it out yourself in the studio. But working on the mural was completely head first, and this one is kind of a step back from that public interaction so it’s a little bit easier. I’m a fairly social person, but it’s more interaction than I’m typically used to so that’s the, in regards to my work, so that’s the most difficult part I think is sitting in board meetings, talking about what comes next and all that jazz. But it’s fun too, it’s nice to mix it up every so often.

Are there other formats of producing work that you’re interested in?

Not at the moment. I guess I’ve always thought about, and being here at SPACE also working with Pickwick and Pilar, the collaboration aspect of it, not knowing how to do something and having somebody else show you how to do it and that leading to new ideas. So that’s been pretty interesting being here and working with them. So maybe that’s something I could take with me, integrating other artists into the process a little bit, so that could be something. I know the last show that I had in Portland, I had a woodworker build my structures, so that was kind of a collaboration. so maybe just working more into, moving more into that direction for collaboration with other artists and creators in some way.

Who would your dream collaboration be?

That’s a tough question, I mean there’s artists out there obviously that I’d love to be a fly on the wall and watch them work, but, collaborating with them I guess would be a different way. I think that at the heart of it I’m a fairly selfish painter and person so I’d like to do it all myself. I work in portraiture mostly, there’s an artist in Portland, this guy named Nate Ethington that makes really great work but it’s not portrait-based it’s more like abstract and shapes and geometric stuff, so I thought it would be interesting, we actually talked about it, collaborating on him providing the surfaces and me working off that and vice versa so, that’s a local artist in Oregon that I’ve talked about collaborating with we’ll see if it happens, if it gets to that point so that could be exciting. Yeah artists that aren’t necessarily figurative artists and just seeing how that plays, what comes out of that kind of collaboration. But nobody aside from Nate specifically that I’ve thought about.

Anything else you want to add?

In general, this is my first residency and it’s been kind of challenging, cause I have a day job so working full time and then getting off and going to the studio is what I’m used to, so just having all this unlimited time in the studio to work has been difficult but also exciting, like super enriching, I want more, I want to get used to this I think is what I’m realizing in doing this residency. And just being in new places is really inspiring, I’ve never been to Portland, Maine, or the Northeast this far at all so it’s just a different speed, it’s kind of throwing me for a loop but in an exciting way.

Julia Whyel is a storyteller and Media Producer in New England. Her work focuses on themes of community, addiction, and vintage fashion. She loves seagulls, airports, and Happy Meal toys, but not necessarily in that order. View her work here.

Liz Miller In ConversationNovember 20, 2017
John Cotter on writing, trauma, and the stories we tell ourselvesDecember 9, 2017
More Content
give me a tension!
Wednesday, March 17 2021