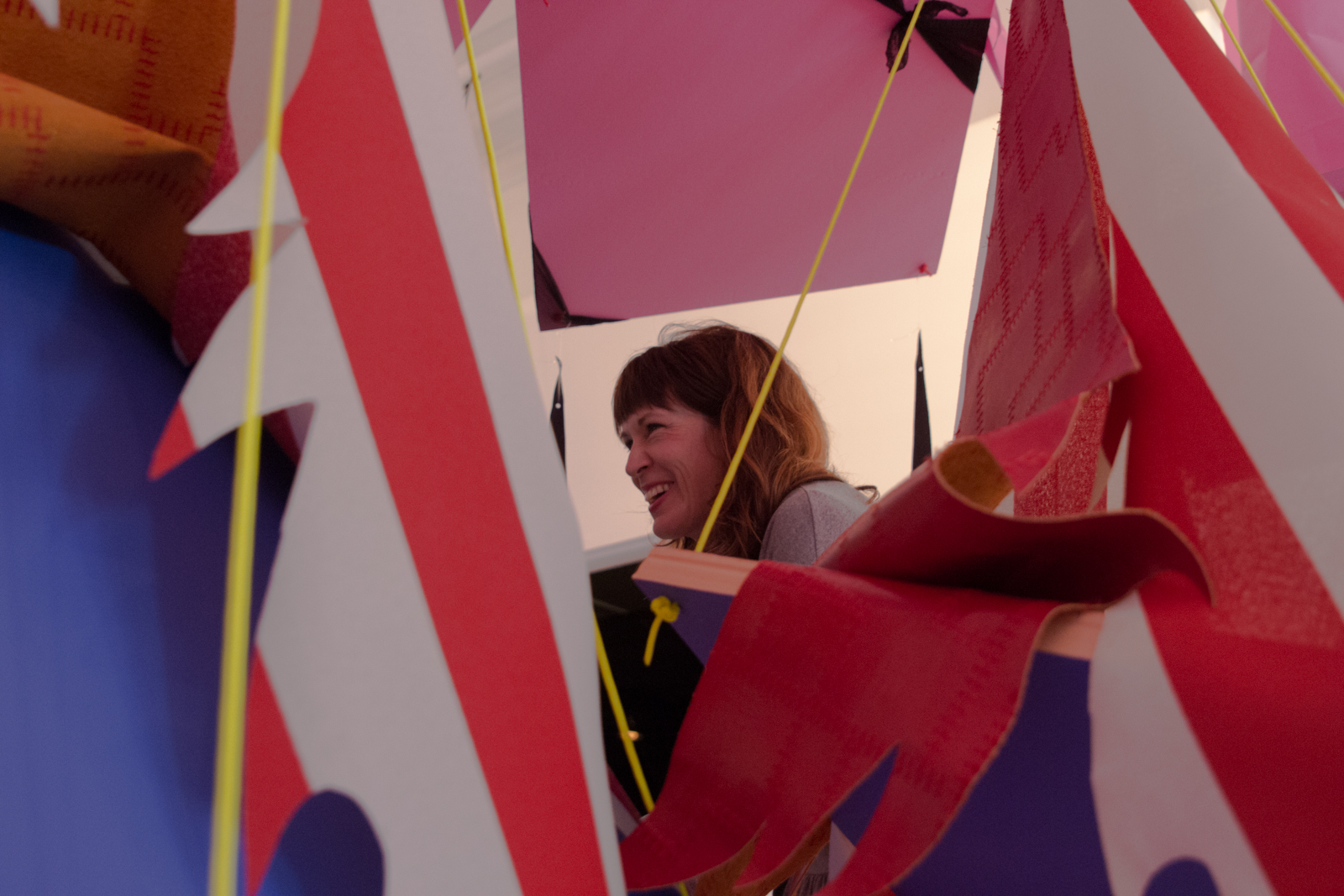 Liz Miller creates a landscape of non-objective, draping textile forms interspersed with and responding to rigid, rectilinear platforms anchored at various levels throughout the space. The play between hard and soft materials combined with the materials’ various surface qualities and relatively low-tech construction methods reinforces the artifice of the sculptural environment, reminding viewers that any illusion is fleeting. While the forms in the installation are not instantly recognizable and do not bear reference to one specific set of imagery, they can certainly be read as beautiful, absurd, poetic, and even menacing at times. “Mendacious Veracity” will be on view November 1, 2017 through January 6, 2018 in the Gallery at SPACE.

What propels you to keep creating amongst the political and environmental existence that we’re in right now?

It’s something that I’ve thought a lot about I mean I think a lot of people think about it continually. I think especially in a time like we’re living in now where there is, it feels really tumultuous, it feels like a lot of issues that have been ongoing are getting worse, and in some sense it can feel, especially if you’re work is only tangentially involved in addressing these issues, it can feel frivolous, it can feel like what I do isn’t enough, it’s not important enough. But I really believe, I guess, in the power, well I believe in the power of just creative thinking in general in a broad sense, so I think some people’s work can very specifically maybe address those issues, some of us maybe are much broader and more abstract in the work that we do. But I think like all artists especially now, it seems to me to be political, just that act of being creative and making things and really going for it. I also hope that there is a kind of poetic possibility that exists in visual art that doesn’t exist in other disciplines that can maybe subconsciously open our minds to different ways of thinking cause I think there are definitely works that are very socially engaged works, that are pretty direct in the communication. I don’t make that kind of work, I’m more, my work is sort of like painterly abstraction gone sculptural, it’s a different set of materials, so I don’t make that kind of work, but I do think that there’s something about the poetic possibilities that exist in abstraction and the way of thinking and the way of reexamining even simple forms and materials, that hopefully just allows people to think in a different way that’s useful, and it’s interesting as an installation artist you use a lot of materials so you also think about like the impact that has, are you making work that’s environmentally conscious? Does it end up at a landfill? And that was something I thought a lot about as my work got larger and larger in scale, like am I just contributing direct to the planet? So I think that effort to repurpose and recycle and reuse my own materials so that one show can become ten shows and maybe I repaint elements or maybe I cut elements into new forms. But that idea of reinvention, I think, is something that all of us have to think about. So there are different levels or layers of responsibility and I think we can’t all do everything, or address every issue, but I think hopefully, if we all try in our own way it will sort of cumulatively result in something good.

Can you talk more about all art being political?

Well I think there are so many forces in the world that don’t want people to think very creatively, and, gosh I didn’t start this interview off thinking I would talk about Donald Trump, but you know I do think that, there is a situation in our country certainly right now where, I think, creative thinking is being challenged. And not just creative thinking, I think scientific research is being challenged. And so I think that idea of engaging in these activities that I would say are just important to having a culture that is sophisticated, that has empathy, I think all of these things are important, scientific research, arts, music, art on a broad sense of the word, literature. So I think just the idea of trying to push that creative thinking forward in any form. I mean, to me, especially now in this context it feels like there is, you’re sort of making some sort of political statement just by saying ‘I’m gonna do this, no matter what, this is important’. And then I think you can go beyond that obviously and make a more pointed statement if you want.

If the installation could talk, what would it be saying?

I think it would be saying a lot of things. I think the works I create are elaborate fictions that have elements that pull from a lot of different places and my recent works have left the very specific imagery I think that was guiding them for a while, so I was using a lot of imagery related to historical weapons for a while, and kind of reconfiguring those shapes. And then I became interested in contemporary firearms that I was camouflaging those shapes, and then I just got to a point where I didn’t feel like I could be genuine with those forms. I was co-opting those forms, but I just didn’t feel like I had a good reason in some sense for co-opting them or maybe I’d taken them as far as I could with my own work. I wasn’t actually trying to make a political statement with that work but you know, you’re using gun forms, so it just got really complicated. And so at some point I was in my studio and I was just kind of playing around with the material and I just let it drape, and just the material and the shape was so interesting and it was kind of like this tacky vinyl material, that you see some of that in this installation. And then it sort of held the form in a really specific way, and I thought ‘there’s sort of everything in that shape, and it’s nothing and I kind of love that’, that there’s so many associations that you can make like there are these strange animated forms, some of them are the scale of the human body, so they have a sort of human presence. They seem really familiar but then they’re really unfamiliar, so you kind of feel like you know what you’re looking at, but you really don’t, and I sort of love that, that ambiguity that I think is hopefully pointed enough, that it does encourage people to come up with some associations, but not so specific that its creating the story for them. So I think that if my work were to talk, it would be saying a lot of different things and that changes as you move through it.

Why are you an artist, and if that’s an obvious question, what would you be doing instead?

Well, I think I’ve always been interested in making things. My parents were both computer scientists and so even though their field isn’t what some people would consider to be directly creative- my mother started computer science in the days when computers took up entire rooms, and she would bring home reusable paper, and it was like the discarded paper that they didn’t need. So one side of the paper would have code on it and the other side was blank and so she brought home the reams of paper and we would draw on the blank side of the paper. So it was just kind of ingrained in us that that was an activity that you do. I don’t think she had the goal of making my sisters and I artists, I’m the only one that became an artist, but I think that it was her goal to just encourage us to kind of be creative and think of it as something that was always available to us. And so I think that that sort of started in me, I guess this interest in drawing, and I think for a long time I wanted to be a cartoonist because I didn’t know anything else that was involved with art. And then I think when I got to Rhode Island School of Design that was a big leap for me, I mean I had grown up in the Midwest with these parents that were supportive but didn’t really know how to direct my creative energy and so that was the first time that I really went to New York and saw people who were actually making a living making visual art. I remember seeing Polly Apfelbaum’s work, she does these kind of fabric works on the floor, and it was sort of like the world opened up in my mind. I thought ‘oh my gosh there’s someone that does this’, so it was just like an awareness that I didn’t have until that point, and so I think that engagement with seeing actual art and meeting actual artists that I had as an undergrad really, really inspired me and made me think ‘this what I want to do, this is it’. So I just kind of felt it in my gut. But I think if I wasn’t making art, I mean if I could swap brains with someone else I’m really interested in people who solve important problems in the world. I mean I think I would love to be a doctor, I don’t have the brain for it but really if I could pick anything and have any brain I would do something like that because I always consider what I do meaningful, but not in the way that I’m solving that sort of problem, so I really admire people that solve these kind of real world problems of any sort where they are contributing something really significant to humanity. I have a friend, a close friend who’s a doctor, I really look up to her and what she does and I think it’s that idea of being attracted to a field that’s very different in many ways from what you do.

Julia Whyel is a storyteller and media producer in New England. Her work focuses on themes of community, addiction, and vintage fashion. She loves people, dogs, and tacos, but not necessairly in that order. View her work here.