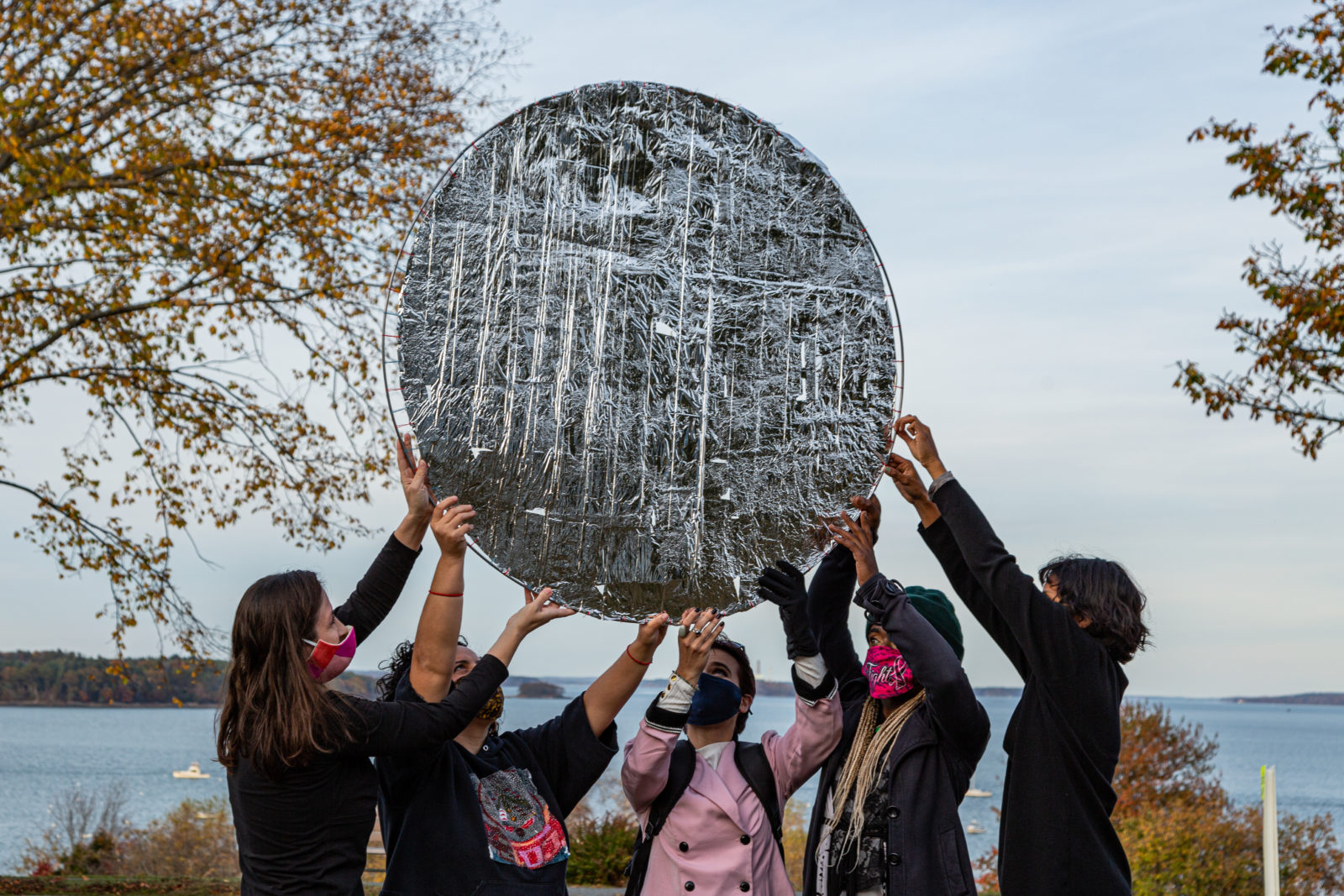 Related Links
RE-SITE: Dreamcatcher: A Heart as Big as the Ocean and as Bright as the Sun

Thank you for your response. You’ve always been so supportive of the arts and of course, in particular, Indigenous arts.

It’s been a REAL pleasure getting to know you, including having you on the discussion panel of the ICA MECA exhibition I did in partnership (and really led by) artist elin o’Hara slavick and curated by Interim Director Jeffrey Waites. I felt that show was a “return home” for me geographically and culturally, and since then you have remained a good friend in this—thank you.

After my father passed away on Memorial Day this year, I received in his estate, shared between my brother and I, two baskets woven by Madeline Shay, and the surveying medallions he received having surveyed the tribal lands, working on behalf of the tribe, during the resurveying of tribal lands throughout the ‘80s and ‘90s claims and settlements. I understand, at that time, you served as the tribal geologist. I believe you may have worked together in North Carolina as part of a Penobscot group discussing with the Eastern Band of Cherokee (among other tribes) the land settlement acts. He mentioned his participation in this off-handedly to me when I received my MFA from the University of North Carolina at Chapel Hill.

My father’s mother, and certainly his grandmother, played a major role in his life. He learned how to trap and hunt and live on the land from them. I feel he used these teachings to survive an early enlistment in Vietnam and then subsequently all the decades surveying through the summer thickets and bugs and winter’s wet icy chill in Maine.

I found my heritage to be much more important to me after the birth of my first daughter, even more so after the birth of my second, and even more so now after the passing of my father. In honoring the significant services I have received throughout my life from the Tribe and on the Reservation, and the services my daughters are eligible for, I want to acknowledge my heritage in my work as it has served a vital role in my life. It is a way for me to understand my family more, and to understand myself. I feel in my personal life, and through my father, my Penobscot lineage is something I live with.

If the ICA show was a first homecoming, then I have felt what Space has granted me, the commission of the Re-Site public performance and video work Dreamcatcher, has been a second. For me, it is a return to Maine from Manhattan—yet a deeper settling, and a return to my roots. It is challenging but ultimately rewarding.

Thank you for the invitation to write this letter. I’m really interested in your artwork related to Indigenous presence in the Portland area, where I grew up. My career work has centered more on our landholdings in the north and so I’ll relate some reflections there.

Like your Penobscot father, I too worked on the newly re-acquired trust lands for our tribe right after the 1980 Maine Indian Land Claims  Settlement. The Penobscot Nation literally called up all of the foresters,  lawyers, and other natural resource professionals to come home, as we were needed. I got the call as a recent M.S. in Geology recipient, at the time working for Mobil in the California desert. I headed up the 300,000 acre (including Passamaquoddy lands) mineral assessment project. We used maps and aerial photos from the James Sewall Company and yes, like your father, I too have a souvenir cadastral survey marker from the trust lands mapping project that he participated in.

I’ll never forget walking into the board room of the Sewall Company, in those first days as we reasserted our sovereignty over the trust lands. Studying the original early maps of Maine on the walls there, you could clearly see a progression in the length of the Penobscot River (measured from the coast inland) growing longer as the years and maps progressed. I had read the treaties (and broken treaties), but here in the maps, one could visually see evidence of our ancestors’ physical efforts to retain possession, to keep a hold on our watershed and territory, to keep the river short on paper! Alas, the maps showed it was not meant to be, the river grew longer instead.

Later, when I worked on GIS mapping projects for the tribe, as part of a lawsuit against the Department of Interior for loss of island real estate in the Penobscot River due to the dams, I studied the Treat survey papers on microfiche. The 1820 Treat survey was conducted exactly 200 years ago, this Fall! It was so interesting to envision our ancestors paddling these white men around, including Treat, the first state surveyor, who could not find their way without Penobscot guides and their birch bark canoes. Treat, in his annotated notes of the survey, expresses some frustration at having to wait for the Penobscot men to build the canoes and to hunt for deer to provide for their families in their absence, before they could start the survey from Indian Island. Other highlights for me were reading their accounts of encountering Penobscots (and documentation of ancient use in the form of caribou bones and shell middens on the sides of lakes) hunting, fishing, traveling and using the entire watershed, which drains a full 1/3 of the State of Maine.

Gallery: Documentation of Smith’s Re-Site installation and performance Dreamcatcher: A Heart as Big as the Ocean and as Bright as the Sun by Justin Levesque (Images 1-4). Letters between Shane Smith and Theresa Secord (Images 5-7).