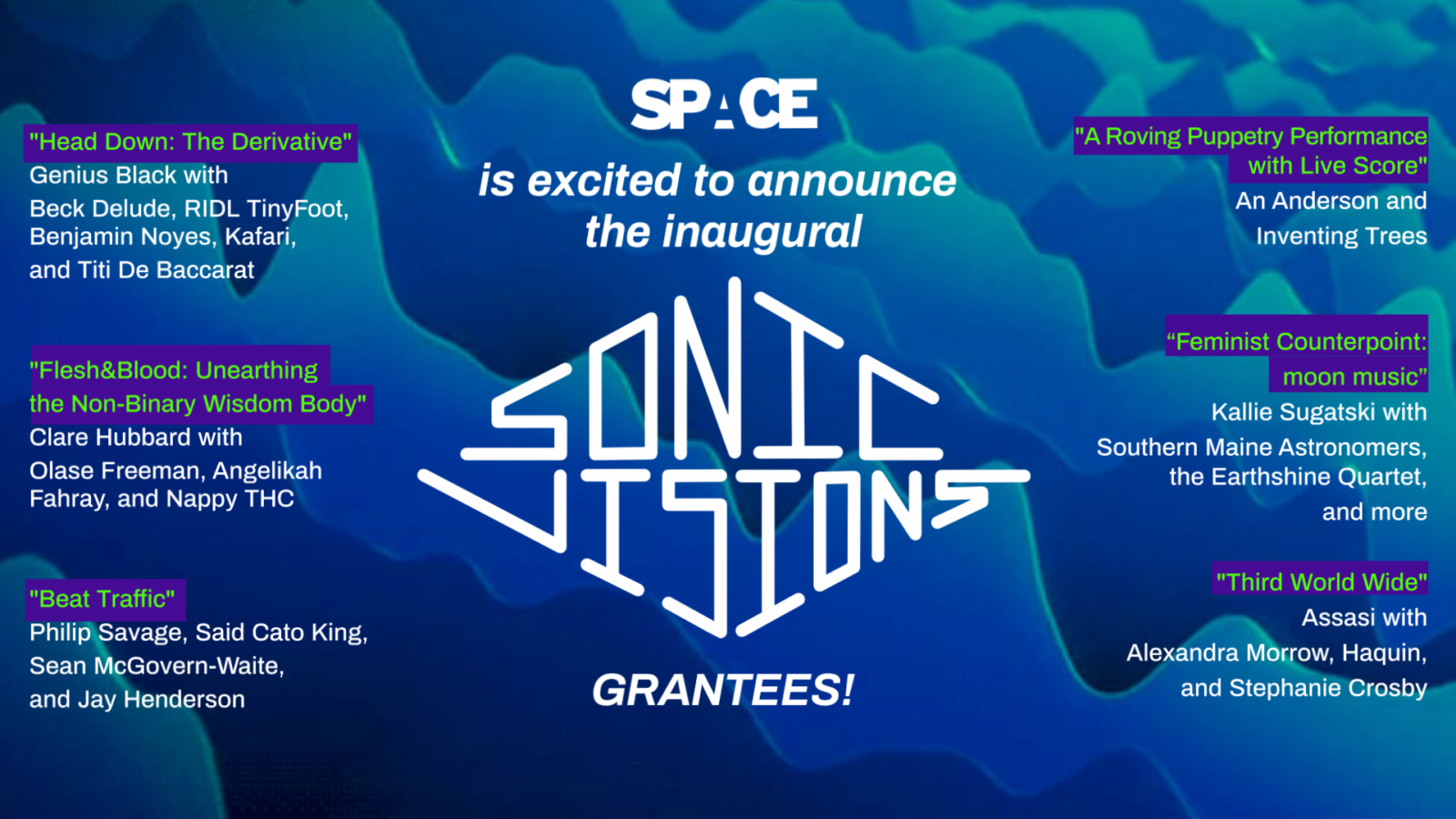 SPACE is excited to announce the recipients of the Sonic Visions Fund. Culled from over 50+ thoughtful applications, these six music-centered projects bring together multimedia performance, collaborative art-making, and communal experiences, with an inimitable visionary spirit. ⁠

We are deeply grateful to the Onion Foundation and the coalition of private donors who bolstered this effort to redistribute funds to musicians across the state amidst the COVID-19 pandemic.

Sonic Visions is a new project for SPACE and a part of our continued efforts to create funded opportunities for musicians in Maine. We hope to grow the size of the individual awards and the total amount of musician grantees in future years.

Head Down: The Derivative
Genius Black with Beck Delude, RIDL TinyFoot, Benjamin Noyes, Kafari, and Titi De Baccarat
A multidimensional musical composition, a meditation on protest, and a response to police brutality; as accompaniment to Portland artist, Titi De Baccarat’s “The Kneeling Art Photography Project”. The work will be presented alongside at least three art exhibitions and projection events.

Flesh&Blood: Unearthing the Non-Binary Wisdom Body
Clare Hubbard with Olase Freeman, Angelikah Fahray, and Nappy THC
A fully choreographed multi-movement song suite with dance and film. Live performances will occur in Portland and in New Portland, Maine (as the opening event of Project Freewill, a community arts center in a rehabilitated church).

Beat Traffic
Philip Savage, Said Cato King, Sean McGovern-Waite, and Jay Henderson
A irreverent web series showcasing beatmakers and rappers from Maine and beyond interviewed and performing in a moving car. The series finale will be celebrated with a screening, performance, and interactive live Beat Traffic episode.

A Roving Puppetry Performance with Live Score
An Anderson and Inventing Trees
A collaboratively developed set-length puppet show with a live score. Live performances will take place in at least three cities and towns in Maine.

Feminist Counterpoint: moon music
Kallie Sugatski with Southern Maine Astronomers, the Earthshine Quartet, and more
A celebration of contemporary music written by women and non-binary composers. An outdoor concert will be preceded by a sunset hike and presentations by local Indigenous educators, astronomers, and climate science students.

Third World Wide
Assasi with Alexandra Morrow, Haquin, Stephanie Crosby, and more
A 4-song EP blending contemporary hip-hop and trap sounds with Golden Age and traditional Arab music. With accompanying music videos and animations for each track and musical and artistic collaborators from Maine and the Middle East. The release will be celebrated with a rooftop screening of the videos, a live performance, and interactive digital events.