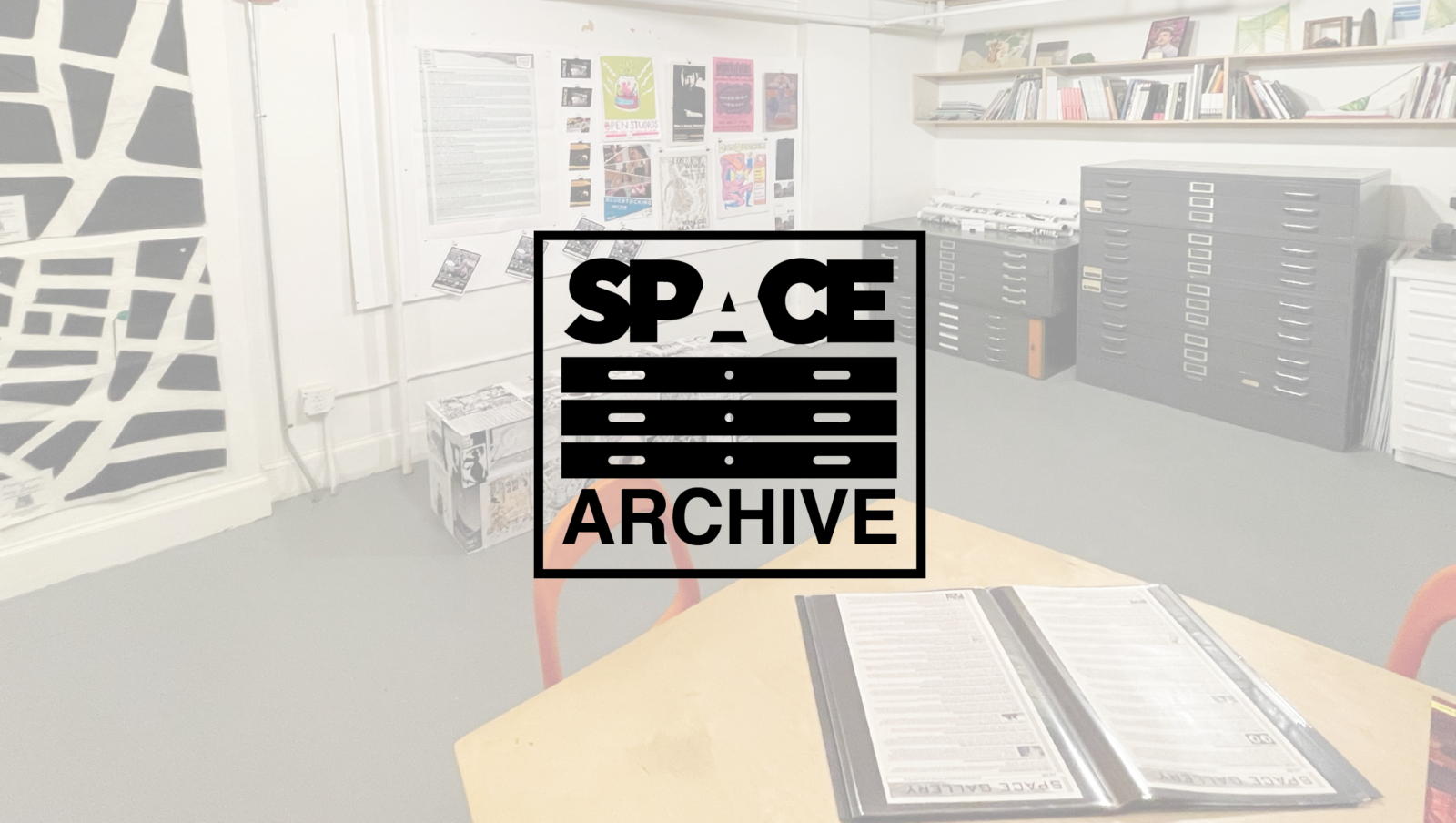 After nearly two years of work, we are so proud and excited to announce the SPACE Archive. Led by staff Julia Whyel & intern Mattie Kohan, this long-awaited project is ready to be shared. The unveiling of this as a part of SPACE’s 20th Anniversary year is a celebration of the last two decades of programming and growth and a landing spot for future memories to be made here. We are grateful to all the past staff, volunteers, interns, and artists who have stashed away ephemera of all kinds, from movie posters, handbills, original works of art and zines; to pins, flags, flyers and more.

These items have waited patiently over the years in various piles, drawers, boxes, and shelves to be unearthed, sorted, cleaned, organized, and finally housed in a newly sourced collection of flat files donated (directly and in-kind) by Judith Steinhauser, Elizabeth Chapman, and David LaCasse. The files and accompanying bookshelves are in our first-floor conference room and ready for viewing! We encourage artists, educators, historians, and SPACE alum to set up an appointment to peruse this collection.

The process of developing the ephemera archive is ongoing, with future goals of digitization and deeper inventorying in the long term. The work up until now has been the most vital in keeping these items cared for and accessible. Special attention must be given to Mattie Kohan, our Archives Intern who has given so much love and care to this project. Here are their moving words on being a lead part of this process:

The thing I kept coming back to while I was working in the archives was the sense of history in it and what an honor it was to be seeing and handling twenty years’ worth of work and people baring themselves by sharing their art. There is a vulnerability in art that’s been stashed away for years suddenly being uncovered, and I felt a responsibility as a steward of so much unveiled material to do more than just handle it with care; in creating an archive, I wanted to make sure the institution would always remember its roots, and keep its past a little closer to its present.

The hardest part was trying to sort such a myriad of work and art into categories: So much of what SPACE does defies borders and makes it so difficult to try and organize into rigid categories. I’m not formally an archivist– I only did one semester at Simmons– which I think actually worked to my advantage in the SPACE archive; not being bogged down by the institutional tradition let my common sense and autism take the lead on how to go about things. My autistic self loves to sort things in unconventional ways so it was really quite a fun challenge to approach the mess that was the early archive, especially once I had the space to just spread out and let the categories emerge. That was really the key for me during this whole process: Having the entire room roped off and not to be touched during the in-between stages. I wouldn’t have been able to go through my process without that physical space, so I’m very grateful to SPACE for accommodating me during the sorting stage.

In going through the archives, I particularly enjoyed how much volume was dedicated to advertising via show posters, and people using images to represent a music show; there were so many abstract posters I came across that invited me to wonder what kind of music it was possibly portraying. I also liked going through the film posters– they had been piled into an immovably heavy stack on the floor or left rolled up in tubes that littered the table, so it was more chronological than the rest of the archive. As I was going through the stack, sitting on the floor with a trusty razor to shave off any lingering tape remains, I kept notes of movies I hadn’t seen, documentaries that looked particularly odd or intriguing– I was amazed at how many titles just kept on coming that I had never heard of. I pride myself on having weird documentary recommendations, so I was happy to beef up my watch list.

There was also a sense of adventure while I was sorting and going through boxes that hadn’t been touched in years because it felt like there was so much waiting to be discovered in recently unearthed treasures. I felt a bit like a fraud while I was working because I don’t know the history of who performed or exhibited in a way that left an impression on the institution, but it was rewarding to see the look on other SPACE employees’ faces at some of the things I pulled out that stirred a memory, and if my work on the archives puts things in order such that it’s easier to go through and feel that nostalgia, I’m glad. Trying to organize an archive sometimes felt like trying to cram things into containers that couldn’t hold them or wrestle a label onto something too vibrant for words because SPACE, as an institution, is alive. Keeping an archive in good working order is one of the necessary steps to keeping your history close and remembering your creative past on your way to the future.

Our Film Programmer and long-time Event Staff Greg Jaime spoke with me about the unique place movie posters hold in our current era, of which the archive has hundreds:

The movie poster format- the layout, the artwork, the size and scope- is a thing to behold and hopefully not a dying art. It makes me really happy that there’s a place where posters of the films we’ve shown can live together past their screening date. It’s no secret that people are going out to see films in person less and less due to the abundance of streaming services and quicker turnaround to video on demand. A strange fallout to that is that ephemera- like the classic one-sheet movie poster size (27×40 inches usually) -is getting seen by fewer people.  Preserving posters of newer films is something I’m really glad we’re doing. There are just some amazing movie posters that are getting made for contemporary films and seeing them in their intended size is something that might not happen forever.

As mentioned by both Mattie and Greg, an archive is as much about the future as it is about the past. While these music flyers and posters hold memories, we hope access to them will work to inspire future programming, both within SPACE and beyond. This archive isn’t just about stewardship of materials, it is a history of ideas that belongs to the community at large, far beyond whoever is currently on the team at SPACE. Local artist and former SPACE staffer Kris Johnson said in a recent Reader interview about having a sense of ownership of this organization “I don’t know if anyone can have ownership, cause no one owns SPACE, it just keeps going.” And so this collection of events, exhibits, experiments, and sometimes mistakes keeps going. The promise of SPACE is in the empty drawers of the archive, awaiting that next mind-bending show. Music Programmer and SPACE old-timer Peter McLaughlin said:

So much important art-making is ephemeral— and while there’s beauty in that, documentation is vital. Alternative visions need to be accessible so we can learn from them. All this work that happens on the fringes, in small spaces with low capacity can so easily be lost to time. Recording art histories is important. I’m so glad we’ve prioritized this and created a physical space that the public can access, where this archive of SPACE and our community can grow and flourish. There are so many stories left to be told!

If you would like to set up a time to view the archive please contact julia@space538.org. Student groups are encouraged!

All photos by Carolyn Wachniki