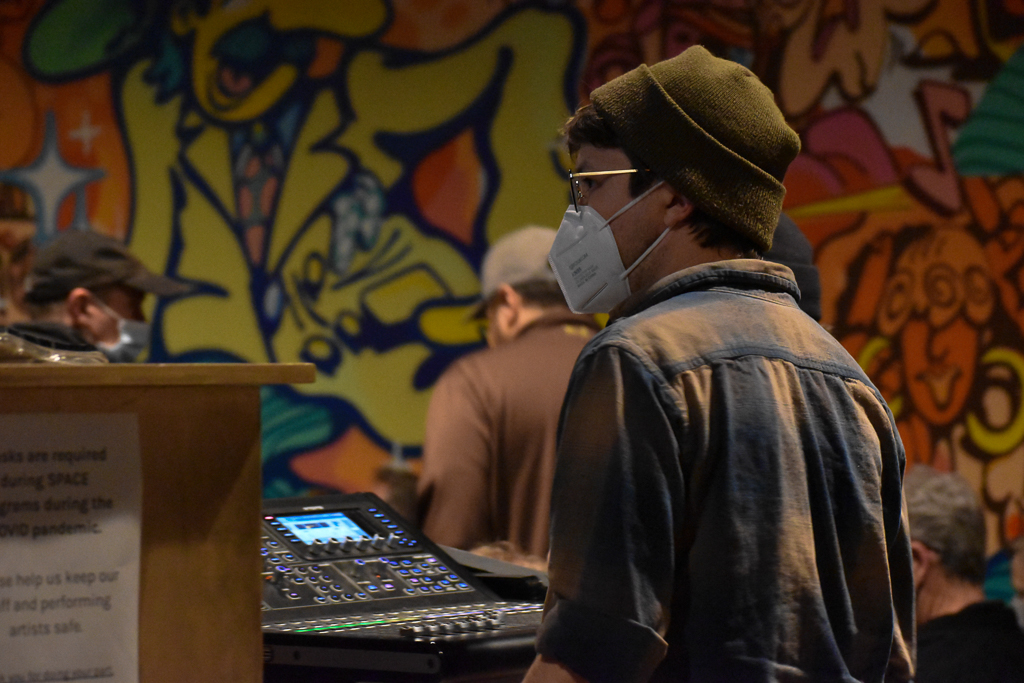 Hi, I’m Jocelyn Leighton (she/ they) and I am the Managing Director at SPACE. We wanted to take a moment to uplift our SPACE Event Staff! We have been having some truly phenomenal events at SPACE and we could not do it without our dynamic event staff. We have such talented, worldly, and down to earth people who give their all at House Managing, at the sound booth, behind the bar, and welcoming guests at the front door. During an event, staff do a really great job at holding the integrity of SPACE for the night. We are lucky to have a very low incident rate here at SPACE, but when things do happen, because that’s life, things happen, staff handle it with utmost respect and care. Personally, I am very proud to manage such a great group of people and they make me better at my job everyday. Thank you to each and every one of you.

Luna Colt (she/her) – An artist, a podcast queen, singer, and an unbelievably good sister, Luna is one of our longest standing event staff and we’ll do anything to keep her forever.

Jamal Cooley (he/him) – Jamal’s talent as a photographer is breathtaking. I would check out all the photos he has done for the Bulkheads because they are awesome! Jamal is also a fantastic dad and produces events at the Press Room in Portsmouth, NH.

Dylan Hausthor (he/they) – An artist of many talents including growing mushrooms, photography, book making, storytelling, you name it. Dylan is a professor at MECA when he isn’t zenfully working at SPACE events or working on their own art.

Camille Howard (they/them) – What’s the deal with Camille? From their own words, they make radio, films, and stuff you can read. Camille started as a volunteer with SPACE, but after only a few events, we fell so in love with them that we had to have them on Event Staff.

Molly Geiger (she/her) – Molly brings the zhuzh to all events that she works or attends, which makes sense as she is a part time fitness instructor at Hustle and Flow Studio in the West End. Her energy shines. Molly also works at the Maine Island Trails association.

Gunnar Heckler (he/him) – Gunnar began as an intern at SPACE and has transitioned into a role on Event Staff. We are thrilled to have him, and along with being a very welcoming staff member, Gunnar also runs an Ultimate Frisbee league and writes kickass poetry.

Jordan Singh (he/they) – Jordan cares deeply about young folks and does many cool things to encourage and support their growth. Some cool things he does; runs an after school Robotics club, was a camp counselor at the Brooklyn Music Factory, and spent some time at the YMCA in San Francisco as an after school program leader.

Bobbie Pirruccello (she/her) – Bobbie makes cool, awesome art, I’m actually wearing her earrings as I write this. She is also in the process of opening a sweet coffee and bike shop in Gardiner, Maine. Here’s to rad people opening rad businesses.

Bobby Carroll (he/him) – A radio show host, avid record collector, an ELL teacher, and a new dog dad, Bobby brings the eclectic energy to SPACE in such a sweet way. Listen to his program Joynoise nights on WMPG!

Charlie Butera (they/he) –  Charlie began working at SPACE and at Little Woodfords around the same time and both places are very lucky to have him. Charlie brings great care to fostering a welcoming environment and their love of creativity radiates through in their work ethic and collaborative spirit.

Joe Sasso (he/they) – Joe brings fresh ears to our sound team here at SPACE, and also wears dynamite sweaters. They work for Prism Analog and Starbird Music as well and are basically all things music. We love having them at SPACE.

Quinn Farwell (they/them) – Quinn has been with SPACE for quite some time now and hopefully they stay forever. Quinn also plays in a local band, does other programming and music stuff. They love their cat Lue and so do you.

Sierra D’Amours (they/them) – An essential of our sound team, Sierra’s stellar sound work has gotten them job offers from touring bands coming through SPACE. However, their loyalty to SPACE and Maine remains, which we are grateful for. In their other professional endeavors and free time, Sierra grows mushrooms, sleeps in the outdoors, and cares for an adorable kitty cat.

Michael Cormier-O’Leary (he/him) – Another rock and/or roller, Michael not only plays in a band but also runs his own record label, Dear Life Records. Michael has enthusiastically jumped into many roles here at SPACE, currently taking House Managing and Sound shifts, the most recent being at the fabulous Grouper show.

Hannah Hermes (she/they) – Hannah recently joined event staff and also works at the epic CÔNG TỬ BỘT. They are a local artist and do freelance work, so look no further for illustration, print, or design work!

AP Nuri (she/they) – AP started at SPACE as an intern, then transitioned to event staff, and most recently joined a great crew of folks to the Flourish Festival in Fredericton, NB, Canda. AP is a wiz behind the bar and has created several of our most recent drink specials, including the Call Me They that highlighted Alok Menon’s event in early June.

Kris Clark (he/him) – A legend in the Portland community, we are thrilled to have Kris on event staff at SPACE. Kris ran Zootz for many a year and hosted many bands just at the beginning of their careers, including my personal favorite, The Smashing Pumpkins.

Shaun Sutkus (he/him) – SPACE’s Production Manager, Shaun Sutkus also tours with the band Battles. Shaun is a master at his craft and SPACE is very lucky to have him on staff.

Jaina Neri (she/her) – SPACE’s new Lead House Manager, Jaina, joins the Event Staff team with a great deal of experience in running events and team leadership. She already knows SPACE well through our music programming and has come on board with rejuvenating energy, we are very excited to have her on staff! Plus, she makes fabulous artisan earrings, check them out on her Etsy page.

Join us as we Celebrate 20 Years of SPACE! Learn About our Anniversary Party here!