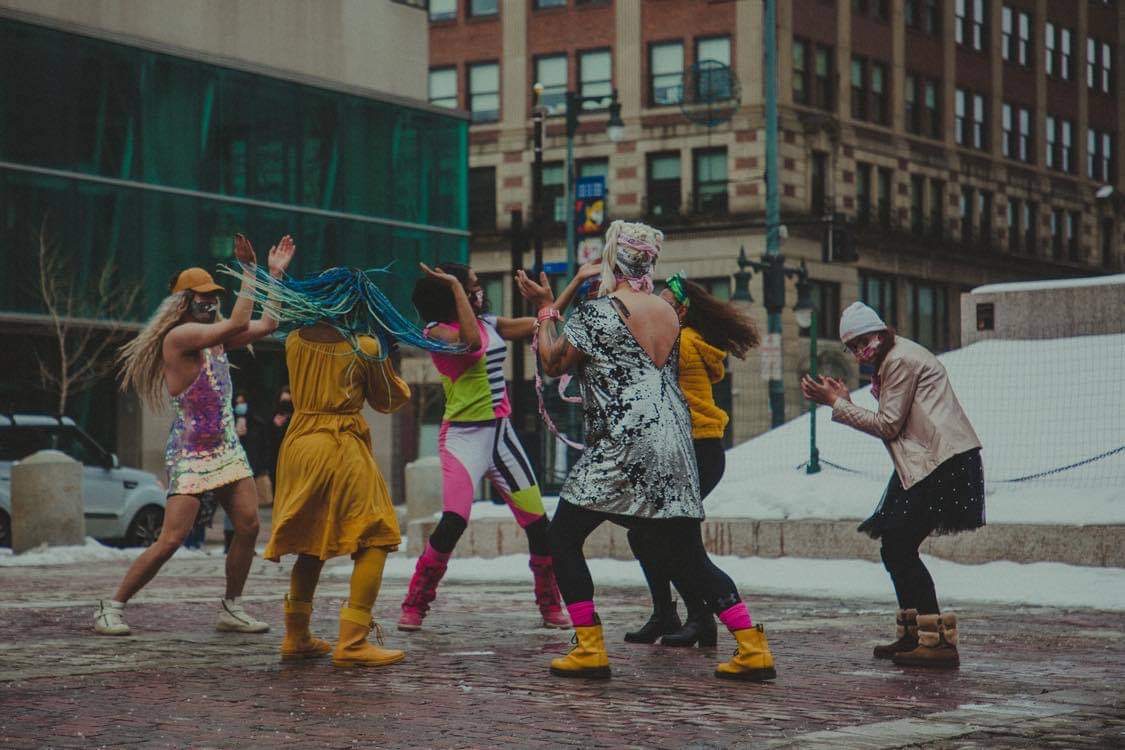 Developed while working as an artist in residence at SPACE in January and February 2021, Truth Speaks shares her personal experiences behind the creation of “Street Dance Activism: Portland is Burning” and the driving reasons behind the urgent need for a creative activism platform developed by a Black Trans woman.

It was the Summer of 2019. Two queer, Black dancers traveled to Portland, Maine and invited me to be a part of a collaborative dance project called This is Formation: Intervention. Jerome Donte Beacham, who resides in Texas, along with Jumatatu M. Poe from Philadelphia, introduced me to J-Sette upon their first ever visit to Maine. J-Sette was created by Black dancers and drill performers in the American South, dominated by Black women and popularized in Black gay clubs. As a Black Trans Woman and Southern dancer myself, I wanted to take everything I had ever learned and teach it to others like it had been taught to me. My vision as one of the 2021 Artists in Residency at SPACE Gallery, was to empower Queer and Trans Black, Indigenous, and POC dancers within the state of Maine.

I had three weeks to create a piece of work that I wanted to present to the city of Portland for Black History Month and I wanted it to be both powerful and collaborative. As a Black leader in my community, inclusivity and representation of Black people throughout all parts of the African diaspora is of the utmost importance to me. It’s a crucial component of my leadership that I learned to exhibit from other leaders within the Black Collective, particularly here in the state of Maine.  In the late Spring of May 2020, after the police killing of George Floyd, me and several other Black folks throughout the city of Portland gathered together to organize protests initially as part of the group BLM Portland who now calls themselves BLACK P.O.W.E.R. During my experience as a Black Trans Woman working alongside other Black people in these efforts, I experienced some transphobia and started to question Black leadership.

After my life was put in danger by other Black leaders within my own community, I brought forth many disturbing questions to my peers who I’d been collaborating with. I asked the tough questions and shed light on issues that directly endangered my life as an openly Black Trans Woman. I was curious about how someone could be an advocate for Black lives, including mine, while also sustaining transphobia, threatening me and attempting to silence me; all while being welcome to speak at these same BLM protests I had been involved in. Once I brought up my concerns and continued doing the anti-racism work I had been doing since 2015, I was suddenly and very passively dismissed from those spaces. Black Trans Women continue to die at disproportionate rates within the Black experience for exclusionary reasons as such, where our voices and lived experiences are way too often ignored, not genuinely represented and where we’re given little to no support.

I decided to take a combination of several dance styles that are rooted in Black history and choreograph a street-dance performance. Using a variety of body movement ranging from Vogue-ing, Hip-Hop and J-Sette, I presented a vision of Queer and Trans Black and brown people reclaiming our time in one of the whitest states in the United States of America. I envisioned us taking up space through the city streets of Portland and executing combat with our very bodies through dance; symbolizing a rising up against white supremacy and white culture. I contacted a few friends from the QTBIPOC community, some who I had danced with in the past, and created a space where everyone could bring something to the table and be their authentic selves.

Several of the performers all agreed to collaborate with me on this project in which we decided to call, “Street Dance Activism: Portland is Burning!” Maine’s LGBTQIA+ scene is extremely white-washed and harmful, upholding systems that are far from being anti-racist. I learned this early on when I started to creep out of the closet and seeking Queer community. I visited places like Blackstones, one the spaces I trusted to visit, where white men were very transphobic, misogynistic, anti-feminist and racist. Continuing to see spaces that were supposed to be safe and inclusive for me, uphold toxic and dangerous behavior broke my heart and left me feeling angry and isolated. I had listened to and read stories about other QTBIPOC being harmed in similar ways as me and decided to use the one thing we all loved to do to address this divide, which was to dance!

Inspired by James Baldwin’s use of metaphorical wisdom, I tend to think of us all as forces of fire, bouncing throughout stolen and colonized Wabanaki land. Baldwin’s use of “fire” in his writings fixated on refinement and change stemming from the anger about racism from Black people in America. Portland is burning was inspired by Paris is Burning, a documentary about the lives of Black and brown Queer and Trans communities that a white woman by the name of Jenni Livingston inequitably profited from. In addition to this injustice, Madonna, another white celebrity profited from and white-washed Black and brown culture, stating “It doesn’t matter if you’re Black or white, if you’re a boy or a girl.” The racial harm caused by the lens of white feminism is pervasive and unfair.

The two Black dancers who visited Maine to teach me the history of J-Sette, led me and others through the streets of Portland in 2019 during one of Portland’s First Friday Art Walks. People loved us and we brought so much attention to the work of Black and brown queer folks, which is often not mentioned in movements that encapsulate advocacy for Black lives. The passion I possessed to do the same led me to this very moment here in 2021. In addition to collaborating with several Black and brown dancers, I invited one of my best photographers and friends, James Dillon III to capture our project through film and photography. James and I worked together after the police murder of George Floyd to capture some of my early anti-racism work so I knew he’d be the perfect human to collaborate with for my Residency at SPACE! James and I spoke intentionally about reparations for Black and brown communities and used his platform as a way to support our work among many other BIPOC communities.

We’ve included a promo-video of “Portland is Burning” to give you a short glimpse of our upcoming film. We hope to release this documentary late Spring of 2021. In addition, James has decided to curate a book using his creativity, photography, as well as personal writings from me and all of the original dancers. We will announce our book release “Portland is Burning: The Fire Within” this Summer!! We want Street Dance Activism (SDA) to grow and expand and are so happy to invite other Queer and Trans BIPOC to be a part of the anti-racism work we’re doing. If you’d like to support our work by being a sponsor, sound-tech, volunteer or contribute in any capacity, please email us at dantespeaks207@gmail.com for more information.

“Street Dance Activism: Portland is Burning” is a short documentary about our lived experiences as Queer and Trans BIPOC from the state of Maine, with a focus on Black Trans Women. This film captures many of the struggles we face as Black and brown people within our own racial communities as well as from the culture of white supremacy and racism. We share personal truths about being Black and brown, our genders, sexuality, our communities, daily lives and how we navigate oppression in ways that are often not spoken about among the Black diaspora. The film captures us as the symbol of fire, meant to serve as a source of refinement amongst occupied, Wabanaki land here in the white-washed state of Maine. Portland is Burning because we are the change that keeps on coming and coming and we’re going to make sure that everyone feels the heat!