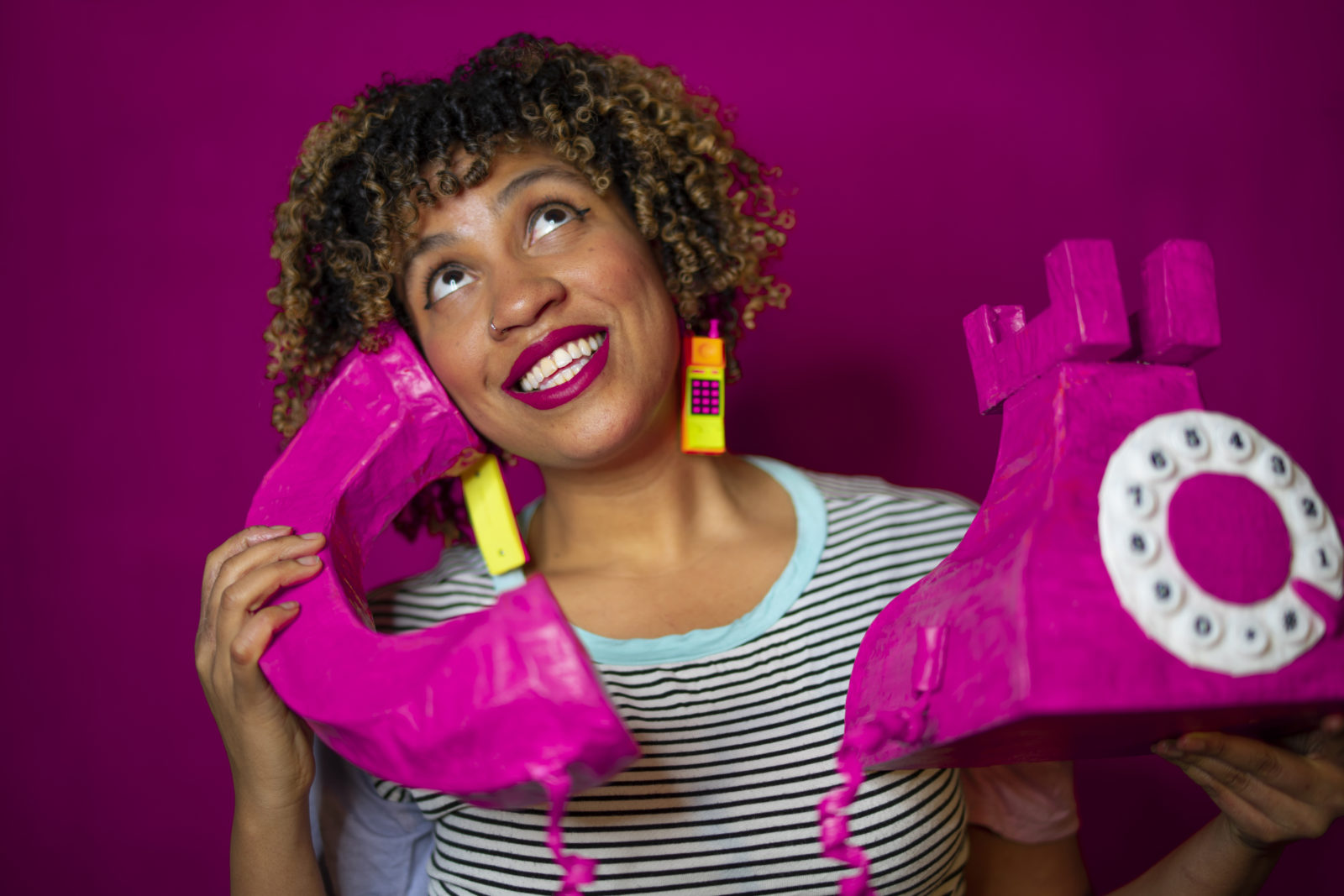 Miss Eaves is the musical project of feminist sound storm and multimedia artist, Shanthony Exum. “Zooming in” from Montreal, Exum spoke about the origins of her music, balancing topic and approach, and how she’s trying to get outside her bubble during the pandemic.

How did you start making music? What are the origins of Miss Eaves?

It feels so long ago now. It’s been 12 years! When I was based in North Carolina, I was dating a noise musician. I remember seeing this band, Ear Pwr, live and I turned to my ex and said, Oh I want to do that. And so we made a band. I had no musical background before – I just knew I wanted to be on stage with a microphone and have people clap for me. So we started SugarHigh Gang: he would do live drums, sparse electro tracks and I would do these nonsense raps over it about smurfs, bendy straws, or wearing spandex pants.

When we broke up, I still wanted to do music but I didn’t want to depend on someone to do it. So I taught myself Reason and launched my own solo project, Miss Eaves. I didn’t have any goals to be a big musician, I just wanted to do it because music is cool. As I was starting that up, I made this video that went viral on Vimeo (small viral, maybe 30K, it wasn’t Thunder Thighs) and that’s how my friend Matthieu, a DJ from Belgium, discovered my music. The video was a staff pick on Vimeo homepage and Matthew said, “Oh, I want to work with her, she seems quirky” and we built from there. I started going to Belgium to tour with him.

I was still based in North Carolina, working at this ad agency when I got laid off right before a tour with Matthieu. So I packed all my bags and on my connecting flight home, I got off in New York. It was a heavy suitcase, so I said I’m just going to live in New York, I’m going to be an artist and freelancer. I’ll make it work. I just did it.

It was an interesting transition from my previous band, where I was rapping about nonsense, to now I’m rapping about political issues and things that matter.

Right, your music touches on so many relevant and necessary themes: femme body positivity, work exploitation, the highs and lows of internet culture.  Concurrently, there is a sense of fun that runs through the music – the wordplay, the production, the use of color & craft in your visuals. This strikes me as natural, but as the creator, how do you balance topic and approach?

Whenever something comes up, I tell myself, you should write this down. It comes from a genuine place. Like when a client doesn’t want to pay me… Exposure Kills. Or all these songs about love. Why don’t I write this one song about not being in romantic love but being in love with myself – Paper Mache (Single AF).

The topics come organically as do the visuals. I went to design school, that’s my background. And I’m pretty funny and silly – I don’t take myself very seriously. I’m wearing Chinese food take-out pants right now! My whole life principle of not taking myself too seriously comes through in my art.

I just did this live recording in Montreal. It will come up in January. It was super wacky and everyone who was participating was super down to bring their own wacky ideas: Let’s use a green screen? Great, I’ll go get a bunch of green color poster board and tape from Dollarama and greenscreen out the stairs on stage. One of the guys said, “I’ll get a mascot suit and be your DJ.” Yes, you should totally do that. Then I had the idea to get a bag of bread for “Stacks” and told my DJ to go like this [motions to fanning out bread slices as if a stack of money, then tossing it out of her hands] while I’m twerking on the falling bread. It just kept escalating.

It was! And there were so many problems with it. One of the cameras died in the middle of the set and we had to run and replace the battery. I lost control of my DJ app in one of the songs so I had to rap at double-speed because the show must go on. The whole thing was very much improv. That’s the other thing, I do improv comedy –  and so it was weird to do such silly stage banter without a live audience.

Have you done any other live stream performances this year? How are you feeling about your show with SPACE on Tuesday?

This is my first one! I don’t count the one I shot yesterday because it will come out in January. My set for SPACE is going to be a lot different. It’s going to be at home. For that taping, I had six people helping me but for SPACE, I’m bringing in animated GIFs. How would it be a Miss Eaves show without a little hijinks?

I have been away from my home without real gear, so I have to borrow gear and it’s a lot harder. It’s not that I have a guitar and can sit on my couch and do a livestream any day. When people ask if I’ll do this show for free and perform two songs? I’m like, Do you know how much work it is for me to set up all the gear, test it and make sure it sounds decent? I can’t just rap into my iPhone in selfie-mode, that’s going to sound like crap.

I try to share stuff on my Instagram that’s not always positive. It’s not perfectly polished or put-together. Let’s share ideas, not just your image. Let’s use the platform for discourse, for listening.

So then this project happened, Drawn Together for Biden. I’m asking people to post on Twitter why they’re voting for Biden and once they do, they’ll be entered into a pool and maybe I’ll draw them and post their statement. I’m trying to make this project more inclusive because now it’s mostly white people doing it. I have this idea of doing a portrait of AOC. She had this great video for the left after RBG’s death where she was like, ‘We have to vote. This is important.’ I want to take some quotes from that video and pair it with the drawing to share. It’s so important what she said and I appreciated it because I’m not feeling super excited about Biden and I want to be. I hear a lot of people on the left are not excited and are thinking of not voting.  But what if this is the last election? If Angela Davis can vote for Biden…I’m sure you can, bro! Listen to Bernie, he’s voting for Biden.

Is social media helping us in this moment or making it worse?

I’m addicted to the internet. Have you seen that film, The Social Dilemma? It reminds me just how much these apps and platforms were created to make us addicted. And the film is saying that this is leading to the destruction of the world because it’s polarizing us. We’re put in our own bubbles. And I knew this before I watched it but I got to a point where I realized I’m in an echo chamber with a bunch of people who agree with me and that’s why I’m always shocked when something horrible happens. Because I’m not exposing myself to different opinions. So I’ve been trying to mess with the algorithm and follow some super conservative people, watching some FOX news, just so I can figure out What are these people thinking?

I wish I wasn’t so tired in this pandemic. And that’s been amplified by watching the political situation. I don’t understand why we have to convince people to respect others who have different backgrounds than them. …There’s an empathy gap. How can we treat immigrants like this? How is this fine?

You’ve spent the better part of 2020 in Montreal. Can you share a bit about your experience over there?

I came to Montreal at the end of February to study French. But two weeks into my program, COVID happened. New York felt very stressful, it was the height of the pandemic, so I decided to stay and wait it out. But like I’ve been here for most of 2020 – what is going on?

It’s weird to be watching stuff happen in America while in Montreal and because of my jobs, I work with a lot of social justice organizations over there. I can’t build a bubble around myself and not think about it. I’m not that person either. It’s overwhelming –I don’t know if what I’m seeing is what is happening. Because it seems really bad from where I am and I’m scared to go home. But my friends on the ground, they say ‘we still have our lives, we just wear masks all the time inside and outside.’

With the protests, it was inspiring. Ok people are finally realizing that Black Lives Matter. How long have Black people been saying that? And now everyone is saying that and yes that’s a good shift and the movement itself is more accepted in the public sphere. But then you see Trump is always on his fuck shit. Like bro, can you just take a week off and golf? Leave your phone with Melania and stop tweeting. And it’s getting more intense with Ruth Bader Ginsberg dying and Trump declaring Seattle, Portland and New York “anarchist” states… and what else happened this weekend?

This show I’m doing is the hour before the first debate. I’m hoping we can all watch it. Maybe I’ll keep the livestream going. Maybe we can live-tweet the debate. Something to engage because everyone is super burned out, they’re worn out from the virus, they’re tired. And I feel like many people on the left aren’t pumped on Biden, they just know they have to be.